Final Fantasy XIII-2 is a grand journey through time and space. 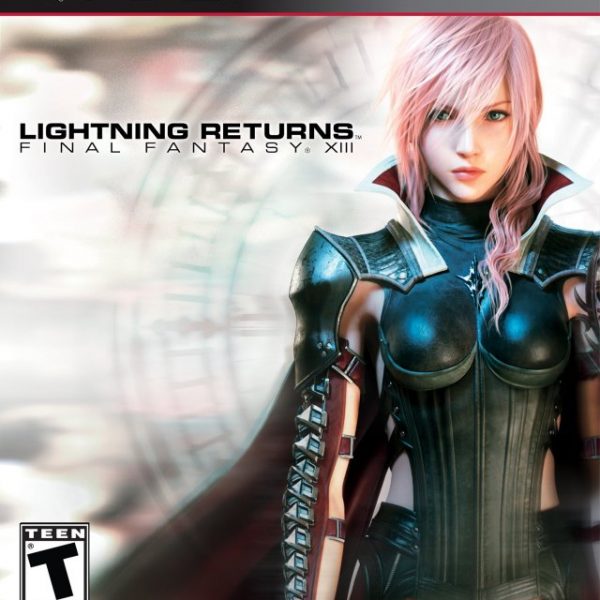 At the end of Final Fantasy XIII-2, I was mad. Mad, I tell you. Why? Simple: I didn’t like the ending. Luckily, by the time I finished the game for the first time, Lightning Returns was getting ready to head to stores across the country. It took me a while to see the conclusion to this series, but the wait was worth it. Lightning Returns is the perfect way to make up for XIII-2’s ending. Getting to that point requires some silly dialogue and dealing with a free-roaming system that will require a strategy guide’s assistance. Once things “click” in Lightning Returns, the game ends up becoming a classic that I recommend to all fans of Final Fantasy.

Things in Nova Chrysalia have become crazy since the last time we saw Lightning. People aren’t aging. An entity called Chaos pollutes the inhabitant’s hearts and minds. And worst of all, the world is supposed to end in thirteen days. The god of Nova Chrysalia, Bhunivelze, has awoken Lightning from her 500 year crystal slumber and given her the abilities of the Savior. As the Savior, Lightning has been tasked with saving tainted souls in the world and donating them to Bhunivelze for his new world. If she complies, then Bhunivelze will grant Lightning the ultimate miracle: the rebirth of her sister, Serah. With the world ending soon and people’s hearts full of despair, Lightning has her work cut out for her. It’s great to see Lightning take the stage again.

Unfortunately, her new story doesn’t have the impact of the first. Most of the time, it’s hard to take the story seriously due to the silly dialogue and the bizarre circumstances that Lightning deals with. That said, when you do reach the conclusion on day thirteen, all of the nonsense you go through will be worth it as you see all of the great characters you’ve met from the previous games come together for an epic conclusion that can only be delivered by a Final Fantasy title. Getting to that conclusion will take adjustment, planning and proper time management.

For those that complained about FFXIII and FFXIII-2 being too linear, Lightning Returns will be a real shock to your system. After the tutorial stage ends, you are on your own. Hope Estheim will (constantly and annoyingly) chime in on current objectives, but everything you do is up to you. The only thing that would inhibit you would be the time of day in which certain events happen. Lightning has been given thirteen days to stop the Chaos and the clock is always ticking. Indeed, there is a timer on the top-right of the screen indicating how much time is left before the end of the world and how much time is left in your current day. At 6:00 PM, the day ends and Lightning returns to The Ark. The Ark is where Hope monitors and helps (i.e. nags) Lightning. Once you leave The Ark, the clock starts counting down again. One hour in Lightning Returns takes about five real life minutes, so managing Lightning’s time will appear tricky at first. When you factor in the plethora of side-quests, the massive size of the four areas that need saving, and the rest of the non-linearity of the game, Lightning Returns will seem overwhelming.

So, what’s the best way to deal with this new type of Final Fantasy? I have two recommendations. The first is to not fret about the timer. Even if you fail your tasks, Lightning Returns offers a very generous New Game Plus that lets you carry over all of your stats and almost all of your items in subsequent plays. This means you can try again and learn from your mistakes. The other recommendation, and the one that worked for me, is to keep a guide handy. Thanks to the use of a guide, I was able to maximize my time efficiently and complete all of the main quests and all but one side-quest. It’s important to clear as many quests as possible because the rewards are Gil, items and permanent increases to Lightning’s statistics. In other words, the more “stuff” you do, the more powerful Lightning becomes. This makes Lightning a force of nature (bad pun, I know) as she fights enemies of all sizes.

The battle system in Lightning Returns is a work of art. Lightning fights by herself, but is able to bring three pre-set outfits/costumes known as Schemata into battle. Each Schemata can be equipped with a variety of abilities, magic and guarding techniques. While most Schemata usually favor a certain build, you are able to outfit them as you see fit. This isn’t limited to just abilities, either. You can equip various swords, shields, head accessories and arm accessories in order to make Lightning become a stylish one-woman army. Furthermore, each Schemata can have its color scheme customized and receive adornments such as hats, glasses, berets and charms. Battles mix real-time elements and turn-based elements. Each Schemata has an ATB bar that lets you perform actions. Obviously, the more powerful actions require more ATB. By switching between Schemata with the push of a button, Lightning is able to tackle foes in a variety of ways. She also has the ability to use EP to perform powerful techniques such as freezing time, healing herself completely or creating decoys. Finally, she can use items if the need arises. Like the exploration, combat takes some (but not as much) getting used to. Looking back on it, the combat system in Lightning Returns is my favorite of the three games thanks to the vast amount of options available.

Lightning Returns is unique, but here isn’t much to say that hasn’t been said before about the graphics, music, voice acting and the rest of the aspects that make up its presentation. If you played FFXIII (and FFXIII-2) then you know what to expect. The game looks great, it sounds great and it features a bunch of wonderful music consisting of Final Fantasy favorites and new tracks exclusive to Lightning Returns. Staying true to its nature, Square showcases some impressive events in the game that will make you think to yourself, “Damn, that was cool.”

If you go on the journey alone, Lightning Returns might be over before you realize it. With the use of a guide and the use of all of Lightning’s abilities, my first time through took me nearly 45 hours. There are many ways to fulfill your goals in Lightning Returns and participate in nearly every side-quest. I didn’t bother to touch upon The Last Ones, The Canvas of Prayers or The Ultimate Lair. If you can’t tell, you will be busy if you decide to see the conclusion to the FFXIII saga. For those interested in acquiring all of the trophies, a minimum of two plays is required. Luckily, you can take care of nearly all of the trophies on your first play if you are thorough and manage your time properly. Lightning Returns: Final Fantasy XIII is a wonderful game. It might take some acclimatization and there will be times the story will make you roll your eyes, but the good outweighs the bad in Lightning’s farewell story.

Overall, 8/10: Lightning Returns offers a unique method of exploration and combat that is worth the time it takes to get used to. If you were left wanting more after Final Fantasy XIII-2, then you owe it to yourself to play this final entry.