Evolution Worlds is a perfect RPG for those new to the genre.

Every console deserves a “best game ever.” Tales of Symphonia is the one for the Game Cube! 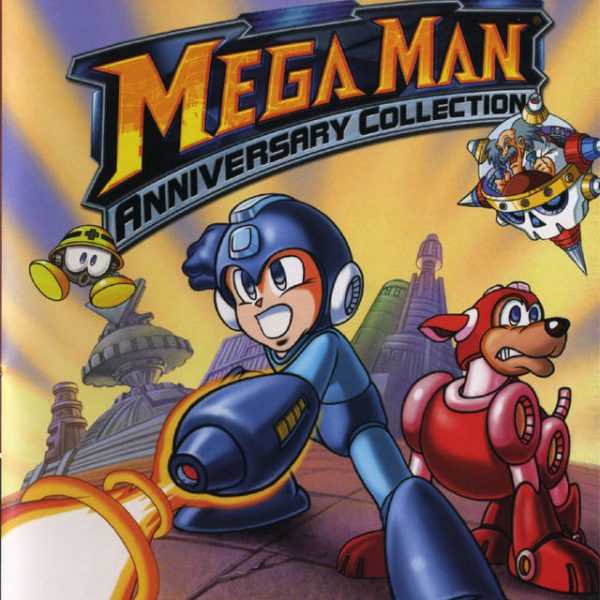 Author’s Note: This review was originally published on July 10th, 2004. It’s funny to think that, as of now, there is a wide variety of options available for gamers to play old-school Mega Man titles. In 2004, this collection seemed like the only way to do so. Another interesting to point out is that, at the time of this review’s writing, I wasn’t aware that there was a PlayStation 2 version. Finally, those wondering about the review title might be able to guess that Kylie Minogue is my favorite entertainer of all time. I remember I was listening to a song of hers called “Kids” during my writing of this review.

Mega Man fans can now rejoice! If anyone missed out on the NES classics of the Mega Man games, then Game Cube owners around the world can play them all…and then some! Mega Man Anniversary Collection contains Mega Mans 1 through 8. There are also some never before released games in the collection! Blue is now in!

Story: 7/10
Mega Man was created by Dr. Light and Dr. Wily. Along wtih him, six other robots were created to help the civilization in which they all lived. However, the robots got out of hand due to Dr. Wily’s desire for world conquest. Only Mega Man can stop them. Each story is the same: Mega Man needs to fight Dr. Wily and his robot minions in order to save the world. While each story changes slightly with each game, all of them still have the same theme. You get introduced to new robots each game, which is very exciting. Out of all the games, I’d say Mega Man 8 is my favorite in terms of story because there are anime scenes that advance it and the flow of the game breaks away from the tradition. If you’re looking for a basic story, then look no further than Mega Man 1 through 6.

Game Play: 10/10
Staying power is all I can say about this. Mega Man games are action games in which you run and jump through a stage while avoiding enemy robots. You shoot them with your Mega Buster. You may get some health, weapon, or even an extra life with every kill. You fight through the stage until you reach the boss of the level. Each stage goes along with the boss’ power. So, when you’re fighting through Ice Man’s stage, you’ll be walking through snow and ice. The game play is very basic, especially in the first few games when the stages are short, but that doesn’t stop it from being tons of fun. The game play, like the story, gets new tweaks with each game in the series. Overall, however, it’s fun. I’d say my favorite game to play is Mega Man 3 because of the awesome stages. The worst thing, however, is the control scheme. This is mainly becuase the GC controller was designed by drunken ducks. I’m not sure if you can customize the buttons.

Graphics: 9/10
Old-school gets a new meaning when you see the graphics for Mega Man 1 through 6. However, they work and work very well. If you’re looking for a 3D action/platformer game then you best look elsewhere. Besides, for the time the graphics in Mega Man 1-6 were great. They were re-used a lot, but they were great. Mega Man 7, in my opinion has the worst of the graphics. This game was released after Mega Man X, and that is a tough act to follow on all levels. They could’ve at least kept the same detailed graphics. Still, not a huge problem at all. The game with best graphics is, obviously, Mega Man 8. This was originally on the Playstation. With it’s engine, it was able to produce great visuals.

Music and Sound: 10/10
Awesome in every sense of the word. Never will you hear a song get used again for another level. Each one is creative, fun, and has a robotic type of rhythm. I guarantee that you’ll be jamming to the Mega Man music. The sound is also nice. The NES games weren’t the best with sound bytes, but they still get the job done. The music more than make up for it.

Replay Value: 10/10
Even if you beat all the games and unlock all of the secrets, you’ll be back for more quicker than a jack-rabbit on a hot date. Why you ask? Well, the games are just plain FUN. That’s what is missing in games these days: they’re just not fun anymore. They get all serious and dark, but Mega Man will always stay true to it’s roots and never get boring.

Buy or Rent: Buy
The game is cheap, even a new copy. Plus, it’s fun for the whole family so everyone can split the cost. Why bother renting a game filled with classics? Don’t bother, at all.

Difficulty: Hard
Mega Man players will remember the difficulty of some of the games. Mega Man has always been hard since day one. If you’re expecting some easy fights, then don’t be too upset when Quick Man gets rid of you in two seconds or Yamato Man spears you to death. It’s hard, but still remains fun.

Mega Man is the coolest character from the 8-bit world. Now he’s back and stronger, faster, and bluer than ever! Don’t miss this game like you missed the cartridges! Have fun, and good luck!