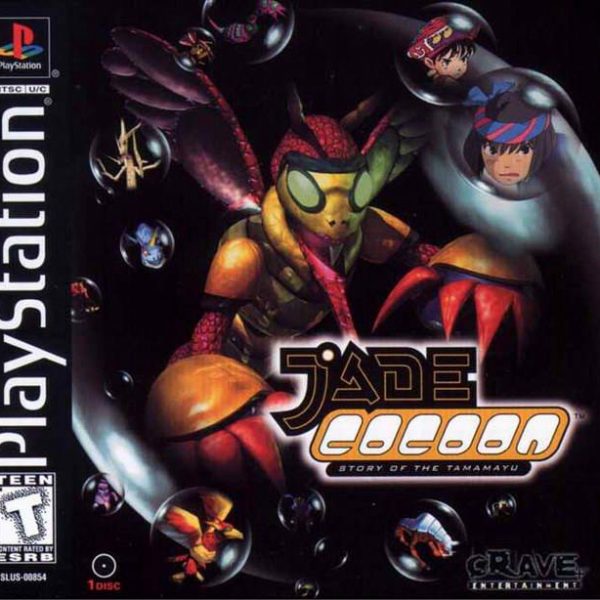 It can be difficult to play games from years ago for the first time. Sometimes, they hold up well and it’s easy to overlook their lack of modern conveniences. Other times, the years that pass the game end up weathering the title. Jade Cocoon: Story of the Tamamayu is a game that is in the latter category. While it’s not unplayable by any means, it has a fair amount of issues that are both a result of its age and a result of questionable decisions. It’s not a good combination. Maybe a few of you out there will be able to go back to it and enjoy all it offers.

One thing that will appeal to everyone in Jade Cocoon: Story of the Tamamayu is the music. The soundtrack is pleasant, peaceful, and captivating. There are times when the music picks up the pace to match the action, but the better tracks are those that you’ll hear while exploring a town, listening to an elder tell a story, or shopping for new gear. Much to my surprise, the game features some solid voice acting. Fans of Japanese animation from the 1990s will recognize many of the voices, all of which do a great job of giving the characters more life and personality. Another feature in Jade Cocoon that deserves praise is the graphical presentation. This game is filled to the top with gorgeous and stunning pre-rendered backgrounds. The level of detail put into each one is impressive. Characters were designed by the masterminds at Studio Ghibli. Their famous style works perfectly for the lore of Jade Cocoon. Characters don tribal scarves, headdresses, and garments to give the game a unique sense of cultural identity.

Jade Cocoon tells the story of Levant. Levant is the son of a famous Cocoon Master; warriors with the ability to capture and tame insect-like creatures that live in the town of Syrus’ neighboring forests. Levant is about to begin a coming of age ceremony where he marries a maiden with the ability to nurture the power of the captured insects. The day of the ceremony, Syrus is attacked by creatures called the Onibubu. This causes most of the town to fall into a deep slumber. Now, Levant needs to find an herb from the neighboring forests to wake up the village. By itself, the narrative is fine. The intriguing history of Cocoon Masters, Syrus, Levant’s father, and the traditions are what make Jade Cocoon’s narrative more compelling. There was a level of detail put into the telling of the game’s story that I appreciate. To further compliment this, Jade Cocoon is filled with likable characters. Levant is a silent protagonist, but his friends and fellow villagers do plenty of talking to make up for it.

Jade Cocoon’s biggest issues involve its game play. Some of the features might have been acceptable during its release. Others needed some major tweaking. The most criminal feature is that Levant has to be moved using tank-like controls. In Syrus, it’s not a big deal. However, as he explores the dungeons filled with buggy monsters ready to stop his exploration, it gets difficult navigating. There are times when you won’t be in the mood for another battle, but maneuvering around an encounter is not possible due to the tank-like controls. Battles in Jade Cocoon are slow. Levant is a capable warrior, but the slow animation speeds of both he and his enemies tend to make the battles last longer than in other RPGs. Levant and the enemy take turns exchanging blows until one side is down. Another option at Levant’s disposal is the ability to capture his enemies in cocoons. While attempting to do this means another long animation, it’s worth it to try. Captured enemies can be used in place of Levant to fight. They’re capable of learning special attacks and magic, too. Magic attacks are elemental based and follow a rock-paper-scissors system regarding strengths and weaknesses. Over time, Levant can acquire a wide variety of creatures. You can exchange them for money or fuse them together to make more a powerful ally. Again, however, this is a slow process. A skip button or a fast-forward button would have really gone a long way. The village of Syrus doesn’t have much to do other than chat with the citizens and shop for new items and gear for Levant. Indeed, most of the time in Jade Cocoon will spent exploring the forests.

Despite its slow nature, Jade Cocoon: Story of the Tamamayu is a short RPG. The game can be finished in as little as 10 hours if you know what you’re doing. Once you finish the game, you can participate in a new area called The Eternal Corridor. This monstrosity features new creatures to capture and new treasures to find. If you enjoy the main campaign, then you will undoubtedly enjoy the journey through The Eternal Corridor. However, it’ll take a certain type of patience to get through the first few hours of Jade Cocoon as he or she adjusts to the game’s age. At the time of its release, I’m confident Jade Cocoon: Story of the Tamamayu was something special. Today, there are only a few moments when the game’s archaic structure is out shined. If you missed this PlayStation RPG, then proceed with some caution before trying it.

Overall, 6/10: Jade Cocoon: Story of the Tamamayu still looks and sounds great. But, nice aesthetics can only carry it so far.