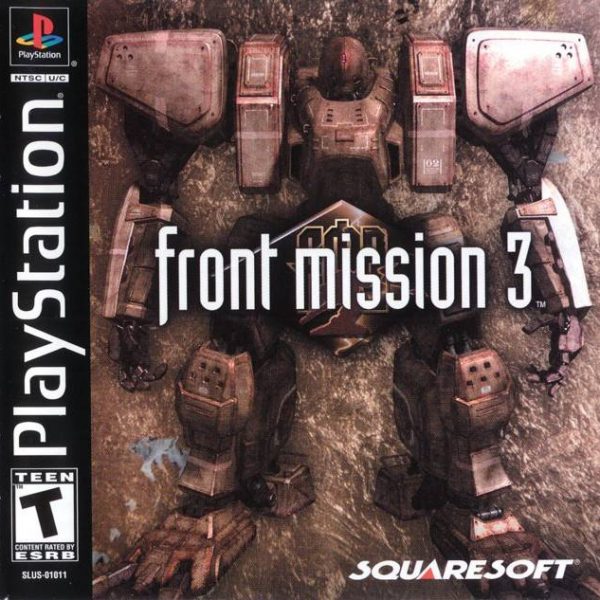 Squaresoft’s epic Final Fantasy Tactics continues to be used as a baseline of comparison for strategy RPGs. The game did so many things right and continues to impress. It’s hard not to compare it to other games in the sub-genre. When playing other strategy RPGs, it’s important to remove the Final Fantasy Tactics goggles and look at the game with fresh eyes. That’s what I did with Front Mission 3; the first game in the Front Mission series to get released stateside. However, knowing Front Mission 3 was developed by Squaresoft may have caused me to have slightly higher expectations. As a strategy RPG, Front Mission 3 is great. But, there are problems that keep it from delivering that same level of Squaresoft quality I expect.

Taking place in the year 2112, Front Mission 3’s backstory focuses on the tense relations between the Oceania Cooperative Union (OCU) and the People’s Republic of Da Han Zhong (DHZ). The story begins with an explosion at Japanese Defense Force (JDF) base that leaves nothing but a crater the size of a city. Unaware of this explosion, Kazuki Takemura of Yokosuka Technical Institute is performing quality control testing on a Wanzer at Kirishima Heavy Industries. Wanzers are large mechas that are used for combat, agriculture, and/or transportation. Once Kazuki’s testing is complete, he rendezvous with his best friend Ryogo Kusama. Ryogo asks whether or not Kazuki is able to help him with an errand. This decision will ultimately reveal the cause of the explosion and the politics going on behind the scenes between the world’s new super powers. The interesting thing about Front Mission 3’s story is that this decision will determine which route you will take. Selecting to go with Ryogo will put you on the “Emma Route.” Selecting to stay behind puts you on the “Alisa Route.” Both stories have different characters and events, but the overall goal remains the same. As of this writing, I participated in the Emma Route. Her story starts with a bang, but the overall experience can be best described as sinusoidal. There are high highs and low lows. Many of said lows could have been removed due to not adding anything substantial to the narrative. But, when the story gets back on track, it’s hard to look away. There is a great story with great characters in Front Mission 3 that could have been greater with some fat trimming.

Front Mission 3 is a very linear, one-way ticket type of game. Kazuki and his team move from story events to missions to intermission. Rinse, wash, repeat. Intermissions are where some of Front Mission 3’s best features lie. First, you can set up your Wanzers for battle. Consisting of bodies, left and right arms, legs and backpacks, Wanzers can be custom built and finely tuned to your liking. Over time, you can upgrade their parts so they have more durability, higher accuracy, better defense, and more. Each Wanzer can equip various weapons such as shotguns, flamethrowers, missile launchers or sniper rifles. A weight limit will determine how much weaponry your Wanzer can handle. One of my favorite features in Front Mission 3 is the Network. This virtual web lets you access various sites that show everything from pageants to super-classified data that can only be accessed with a password. You can learn about the history of OCU, discover personnel information or keep up with message boards talking about conspiracy theories. You can send email to JDF police to turn in wanted criminals or touch base with the characters’ friends and family. While the Network has a shop and a virtual simulator, getting to explore the web serves as a fantastic diversion.

Eventually, it’ll be time to put your Wanzers to use in battle. Front Mission 3 has the components of a traditional strategy game. At the start of combat you can place up to four of your pilots on the battlefield. Each unit has Action Points which are required for them to move and act. When pilots “level up” they earn more AP. Pilots also become more proficient with weapons the more they get used. Even if an attack misses, they will earn some experience for that weapon type. Attacking enemy Wanzers will deal damage to one or multiple parts of it. Destroying the arms renders them unable to attack. Destroying the legs causes them to be unable to move far. Destroying the body removes the Wanzer from the battle. Sometimes, attacks will eject the pilot. By killing the pilot, you can acquire the enemy Wanzer. Finally, each Wanzer part has a hidden skill that may be activated if the right conditions are met. Once this skill is learned, the pilot can equip it to his or her personal computer. These skills range from using more ammunition to offering supporting fire.

You’ll be spending much of your time in combat. It’s unfortunate that nearly every aspect of it is dependent on RNG. Skill activation, attacking certain body parts, ejecting a pilot, getting ejected yourself, and more are all at the mercy of RNG. A battle can be frustrating one moment and simple the next. Having only four pilots at a time, especially when the enemy team has eight or nine, can cause battles to outstay their welcome. Still, there is no denying the enjoyable rush of seeing your Wanzers use multiple skills and completely demolish an enemy. Again, we have a case of full potential not getting realized. Some tweaks to the RNG could have made things less frustrating.

One area where Front Mission 3 delivers is in its presentation. The various Wanzers, tanks, helicopters, and war vehicles look great. Character models are slightly awkward; reminiscent of something like Final Fantasy VIII. However, stunning character art by Akihiro Yamada and beautiful movie sequences outshine those awkward character models. By the time of its release, Squaresoft knew what they were doing in the visual department. Front Mission 3’s fantastic soundtrack by Koji Hayama, Hayato Matsuo and SHIGEKI is an absolute audio treat. There is techno, house, heavy bass, and staccato percussion that fits Front Mission 3’s setting. Certain parts of the game feature voice acting, but story events and dialogue lack it. I found this to be a good choice because it allowed me to imagine how character voices would sound. Front Mission 3 is almost a decade old, but it still looks and sounds amazing.

My time through Emma’s campaign was nearly 40 hours. It just felt longer when the story slowed. With a different route to take, Front Mission 3 could last a total of 80 hours. Another incentive to go through the game a second time comes with its New Game Plus feature. This lets you carry over any skills your pilots learned. Sprinkle in the variety of Wanzers and weaponry, and it’s apparent that there is more replay value here than other strategy RPGs. I’m confident that I’ll go through the game again to experience the other route. After that, I’m not sure if Front Mission 3 will have the staying power to warrant successive sessions. Unlike another strategy RPG from Squaresoft, Front Mission 3 doesn’t have that same level of longevity. But, it’s still an enjoyable game that offers a new look at a sub-genre that is best known for having a fantasy setting.

Overall, 7/10: Front Mission’s North American debut is made of more good parts than bad parts. The good parts are enough to recommend it to any strategy RPG fan, but it’s important to understand that the bad parts can emerge when least expected.