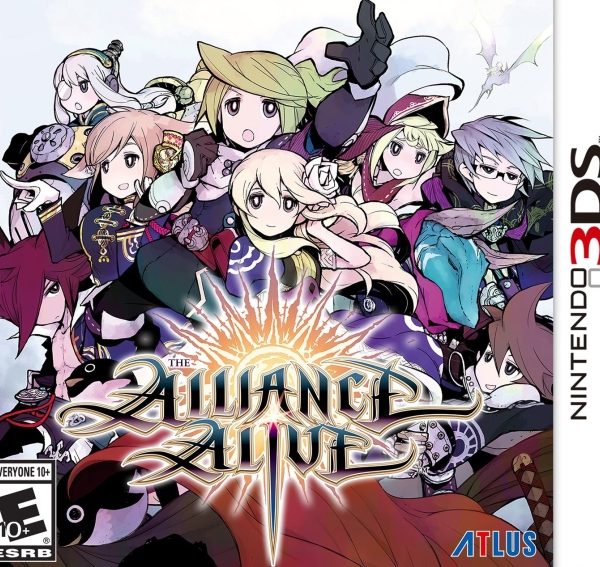 As of this writing, 2018 has not been kind to me as a gamer. Every new release that I picked up has ranged from mediocre to terrible. It wasn’t until the very end of March that The Alliance Alive, a game that I reserved on a whim, entered my Nintendo 3DS and finally gave me some hope that 2018 will be another good year for gaming. From the creators of The Legend of Legacy, The Alliance Alive is a fantastic RPG that is filled with creativity, and at the same time, feels comfortable and familiar. Those that were left yearning for something extra after The Legend of Legacy will be especially satisfied.

1,000 years ago, a war between humans and Daemons came to an end with the Daemons as the victors. The Daemons created a magical barrier with chaotic energy to segregate the world into different sections. This barrier caused the world to become unstable due to massive climate changes. Furthermore, the result of the war resulted in a caste system with Daemons ruling at the top, beastfolks one level below them, and humans at the very bottom. A resistance group called the Night Ravens wish to overthrow the Daemons. However, two individuals wish to restore the world’s balance. The first is Galil, a determined, promising young member of the resistance. The second is Galil’s best friend, Azura. Azura lost her mother years ago to a Daemon, but she remains optimistic that she and Galil can change their world. Galil, Azura and a crew of other races will form a powerful alliance to finally stabilize their world. The Alliance Alive is divided into 40 chapters and follows a linear narrative. If you played The Legend of Legacy and/or have some familiarity with the SaGa series, then you might be surprised by the way this new entry’s story unfolds. It’s a bit of an adjustment, but the great story and amazing characters in it wouldn’t feel as cohesive if the game offered more freedom. The interesting thing about The Alliance Alive is that, while there is a clear path about what you’re supposed to do next, you can take your time and explore your surroundings.

The Alliance Alive slowly but steadily eases you into the game and all it offers. You begin the game in the rainy town of Svald. Towns are filled with chatty NPCs and shops. Once you enter the world map, you will start to notice grand structures scattered through the world. These are Guild Towers. At first, they serve as a pit stop for your party to rest and restock on items. Eventually, you will be able to construct your own branches of Guild Towers and place them throughout the entire world. The Library, Tactics, Blacksmith, Signimancy, and Recon Guilds will offer their services to you in and out of battle. Over time, you can recruit certain NPCs and place them in various guilds to increase their level. Higher leveled guilds mean higher rewards. The guilds are a fun and addicting feature that really make you utilize your limited resources carefully. The Alliance Alive’s guilds combine the best of Breath of Fire II’s town building and Suikoden’s character recruitment.

One of the first dungeons you explore in The Alliance Alive is an old, abandoned museum. Once again, this dungeon will give you a good idea of what to expect for the rest of the campaign. Dungeons are straightforward, but those that take the time to fully explore them will be rewarded. A special type of dungeon that opens later are the Water Devil Dens. Powerful enemies lurk in these underwater labyrinths, but again, exploration will pay off due to the fantastic rewards you can find. Scattered throughout all of the dungeons, towns, and world map are Chaos Gems and Order Gems. Chaos Gems can be traded to a merchant for unique and powerful gear. Order Gems will give you a retry in case your party loses a battle. At the cost of one Order Gem, you can try the battle. At the cost of three, you can exit it completely.

Battles have been improved substantially since The Legend of Legacy. While they still move at a brisk pace, they offer more options and rely less on RNG. Up to five characters can participate in battle. Each character can enter various stances which will impact their performance, and these stances can be switched around in a variety of formations that you can create. New stances are unlocked by adding recruits to the Tactics Guild. The most exciting aspect of battle is the Awakening; the term used when a new skill unlocked mid combat. More powerful skills cost more Skill Points; managing your SP adds an extra layer of strategy. With multiple weapons and magics, it’s a treat to build your party as you see fit. As characters take and receive damage, they get closer to reaching Ignition. Once this is achieved, they can use a powerful weapon skill that causes the weapon to shatter. The game always has the right level of challenge, but since battles are so much fun, it’s easy to battle everything you come across and end up a bit over powered. When a battle ends, you get rewarded with items, money, Talent Points and a chance of increasing hit points and skill points. Talent Points are used to increase characters’ abilities with weapons and provide extra bonuses both in and out of battle.

The Alliance Alive has a look that is similar to that found in The Legend of Legacy. There are unique towns, dungeons and fields that each house secrets that reward those that explore every nook and cranny. The characters are rendered in a”chibi” style, but offer more expression and personality than they did in The Legend of Legacy. It’s not a major graphical upgrade, but it’s still an upgrade that’s worth a look. The Alliance Alive’s soundtrack is wonderful. It’s filled with catchy tracks that feature Hamazu’s style. My biggest complaint about the game’s presentation is that key story events play out in a cinematic, movie style. Character aren’t voiced and the same graphics used in-game are the ones used in these movies. While the characters are still fantastic, they could have really shined with some voice acting. It’s a minor complaint; gamers used to voice acting are likely to get bothered by it.

After about 35 hours, I wasn’t ready to say goodbye to Galil and his friends when The Alliance Alive ended. While the game offers both a New Game Plus and an EX New Game, neither will be able to recapture the magnitude of fun I had with my first go-around. Still, knowing that these options are available and knowing that the game is just the right length makes me excited to start the game again with a new set of characters. All RPG fans will enjoy The Alliance Alive, but those that were left feeling upset after The Legend of Legacy will enjoy it the most. They’re the ones that will notice how much Cattle Call listened to the complaints about The Legend of Legacy and adjusted things accordingly in The Alliance Alive.

Overall, 9.5/10: The Alliance Alive combines classic and contemporary RPG features that come alive in a fantastic gaming experience. Finally, 2018 is starting to look like it could be another solid year for gamers.