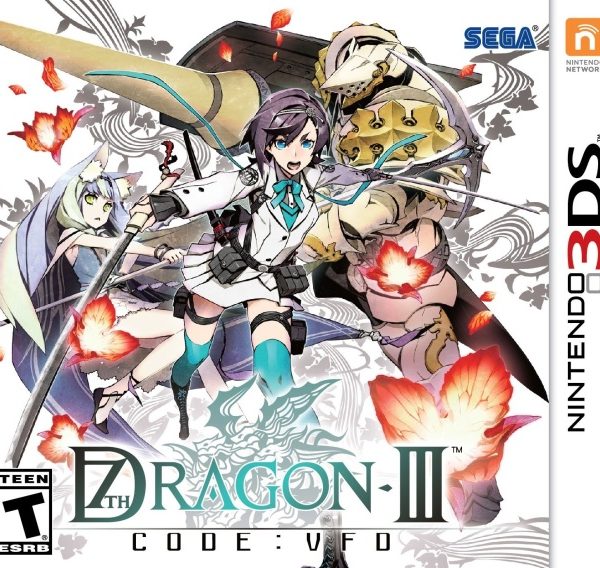 Sometimes, you get treated to special bonuses when you purchase a game on release day. These can include something simple like a voucher for free DLC, or it could be something more visual like an art book or a collector’s box. My favorite thing that gets included with new releases is a CD filled with the game’s music. Many of the games I own came with a bonus CD filled with some of the game’s best tunes. I wish that were the case with 7th Dragon III: Code VFD. The music in Code VFD Dragon has got to be some of the best I have heard in a long time. Its story and game play will keep you playing until the very end, but its music will remain stuck in your head long after the game is put away.

Code VFD is the first entry in the 7th Dragon series that received North American release. However, you don’t need to have prior knowledge of the series to fully enjoy all that Code VFD offers. The story starts with you picking a super-fashionable character, his or her voice, and his or her starting class. After creating your character and some supporting characters, you will be plopped into a futuristic version of Tokyo and participate in the virtual reality game called 7th Encount. With the help of a young girl named Mio, you and your team prove to be experts at 7th Encount. This catches the attention of the mysterious and foulmouthed Nagamimi. This odd stuffed bunny reveals that 7th Encount is disguised as a recruitment tool to bring in people to the mega corporation, Nodens. The folks in charge at Nodens, Allie and Julietta, give you the task of becoming soldiers to help complete a device called the Dragon Chronicle. Now as Unit 13, you will get to travel to the past and future and gather as much data as possible create the Dragon Chronicle and stop the rebirth of the 7th True Dragon, VFD. Despite your team being full of silent protagonists, the story is rich with a detailed world and a roster of developed NPCs that really make you feel as though you are an actual member of Nodens. Unit 13 will often be given choices to make during certain dialogue events. While the choices don’t alter anything, they add something extra to the already fantastic writing. Near the end of the game, some unexpected twists and events will occur that drastically alter the tone.

When starting a new game in Code VFD, you will be given the option to create a team made of various job classes. Unlike other RPGs, the jobs in Code VFD are unique in that they usually have more than one role to fulfill. The Godhand acts as a martial arts master capable of inflicting massive damage to opponents, but also serves as a healer. The Samurai can attack with either a single blade or dual blades. The Hacker can hack an enemy to control it, as well as hide in the shadows to provide stealthy support. These are just a few of the classes you can play with. As you get further into the game, you’ll begin to unlock more classes. Each class has their own set of unique skills. Since every class has a strength and weakness, building the perfect party of three provides limitless options. Once again, as you proceed further into the story, you will be able to hold up to nine people in the party. However, only the first row of three participates in the combat while the six in the rear provide various methods of backup.

Mixing and matching party members will take a huge chunk of time outside of combat, but there are other things you can do, too. Aside from shopping for new items and gear, you can build new facilities in Nodens, interact with your party members to build relationships, destress at a cat cafeteria and/or participate in rewarding side-quests. Similar to unlocking new classes, more options will unlock as you get further into the game. Navigating is made easy and streamlined with the push of a button. If you get lost, you can select the Navi option in the menu screen to be reminded of where your next objective lies.

Usually, your next objective will have you going to a dungeon and uncovering clues about the dragons or pitting you against one of the True Dragons. Dungeon exploration is basic. As you move from various parts of the dungeons, you will find treasure chests, people to rescue, and check points that allow you to return to Nodens. A handy map on the 3DS’ bottom screen will get drawn as you explore new areas. A meter on the top of the screen will change from blue to red, which helps indicate when a battle is about to begin. Dragons appear on the dungeon as non-random encounters. At first, battles will appear basic. You select a command at the start of a turn for your party of three, and then let the turn play out. As characters level up and get the ability to learn new skills, battles become much more involved and fun. Instead of having each character attack, you will be supplied with limitless options that turn Unit 13 in a force to be reckoned with. Normal enemies will rarely be troubling, but facing off against dragon mini-bosses and powerful True Dragon bosses will really put your party to the test. Not only can they attack twice per turn, but they can inflict status ailments or charge their power to decimate your party in one strike. Indeed, 7th Dragon can be one of the more challenging RPGs if you don’t take the time to learn all that your party can do and develop their skills properly. However, with the ability to attack with teammates, perform deadly EX Skills, and earn support from the rear parties, no battle is impossible. The battles are my second favorite aspect of the game.

I’m sure you guessed that my favorite aspect is the music. I’m not sure what it is about this soundtrack that I like so much. Maybe it’s the mixture of electronica, rock, pop, house and techno genres. Maybe it’s the way each song has a tendency to reflect the theme of each area so well. Or maybe it’s just that good. Yuzo Koshiro has created some great stuff before, but there’s something about the music in Code VFD that makes the game worth owning and the original soundtrack worth finding. While the graphics are great, especially some of the dragon designs, and the Japanese voice acting thrown in during key events adds a nice touch, it’s the music that really makes the presentation stand out.

In about 30 hours, I was able to do nearly everything Code VFD offered. However, there is a high chance that I would go back for an additional playthrough in order to try out new parties, make new choices and, of course, enjoy the music again. The only major flaw in Code VFD is that some of the dungeons are cluttered. This makes navigation hard in some areas. Also, the random encounter rate is a bit high when you first begin the game and don’t have access to better equipment and items. These complaints aside, I highly recommend 7th Dragon III: Code VFD to all fans of RPGs, as well as those who enjoy a fantastic soundtrack.

Overall, 9/10: Slay dragons and save the world while enjoying great music the entire time as you progress through a wonderful RPG.