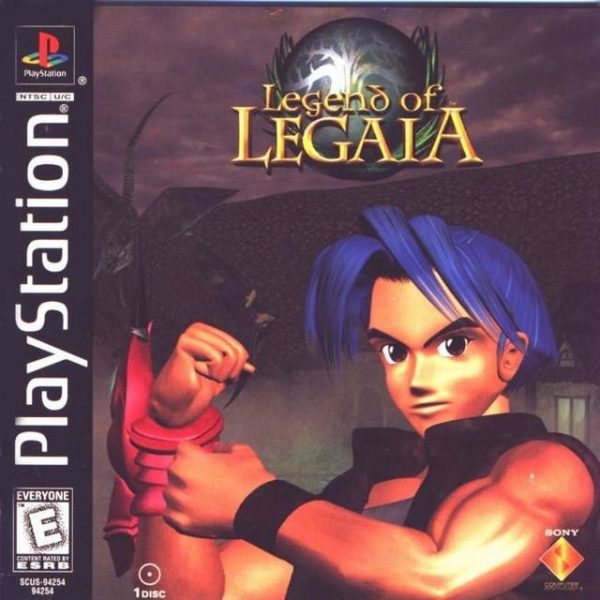 Author’s Note: This review was originally published on August 20th, 2008. Like other reviews around the time, this one has “witty” taglines that separate each section. I think this is a special review because it shows that second chances are worth giving for just about anything.

The year was 1999, and I was craving a PlayStation RPG. I picked up Legend of Legaia and disliked everything about it after about four hours of game time. After playing the amazing Legaia 2: Duel Saga, I decided it was time to give the original a second chance. So I did, and not only did I complete the entire game, I enjoyed the game in its entirety. While I still find Legaia 2: Duel Saga to be the superior of the two, I am so glad that I was able to play through Legend of Legaia. This review is all about second chances and why it is important to give them.

Living Life in Legaia.
In the beginning, the supreme god of time, Relm, created heaven, earth, and the ocean. Then, he created humans. Unfortunately, they were weak and needed aid to develop. Thus, Relm created the Seru. Seru appear as stones, but when worn by a human, they grant the wearer amazing powers. Things were good in Legaia until a deadly Mist swept through the land. Seru turned violent and attacked humans. If wearing a Seru and exposed to the Mist, a human would transform into a zombie like creature incapable of human thought.

Many years have passed since the Mist entered Legaia. In the tiny village of Rim Elm, massive walls protect the townsfolk from the Mist. It is hear that a young man named Vahn lives with his father and sister. A strong, independent man, Vahn has lived in the walled village since he was born. One night, the walls come crashing down by an evil disciple of the Mist named Zeto. Mist enters the town and Seru begin taking over. It is then that Vahn meets a Ra-Seru. Unlike regular Seru, Ra-Seru are immune to the Mist and can be worn by humans. Meta, the Ra-Seru Vahn meets, joins forces with Vahn and revives the town’s Genesis Tree. The tree blooms and drives away the Mist. Vahn realizes that his joining with Meta is destiny and that he must go on a journey to revive every Genesis Tree throughout Legaia, thereby getting rid of the Mist once and for all.

Legend of Legaia has a great story with a very cool setting. There is so much history to learn as you travel through the world, and with every new bit of history revealed you uncover the ultimate origin of the Mist and its disciples. Vahn joins with two other characters, Noa and Gala, and the three of them embark on an incredible journey. Unfortunately, Vahn is a silent protagonist whom you learn very little about. While Noa and Gala develop a bit more in the game, the character development aspect of Legend of Legaia is lacking. It is as though the creators wished to spend more time developing the world of Legaia instead of the people in it. Despite this fact, the perfectly translated story was enjoyable from the beginning of the game to the very end.

Kick! Punch! It’s All in the Mind!
As you travel through Legaia, you will have to fight wild beasts and savage Seru. This is where the battles and the Tactical Arts System come into play. This system lets you customize your attack sequence using the left, up, right, and down directions. By combining the right directions together, you can create an Art which deals more damage to your foes than a regular hit. Arts cost Art Points. By attacking regularly and getting hit, you can accumulate up to 100 AP. However, to perform the more powerful attacks, you need to use the Spirit command. Doing this not only allows you defend and gain AP, it increases the size of your action bar. The bigger this bar, the more commands you can put in. However, this larger bar goes back to the regular size after you do your powerful attack. Besides these regular Arts, there are Super Arts and Hyper Arts. Super Arts are learned by combining the right combination of Normal Arts. Hyper Arts are learned from books found throughout the world of Legaia.

The magic system in Legend of Legaia was one of the more frustrating aspects of the battle system. When you encounter a Seru, you can absorb it and use it in battle as a magic attack. If you character is wearing a Ra-Seru, he or she has the potential to acquire magic after dealing the final blow to a Seru. Some people will say that there is a technique to absorbing Seru. I, on the other hand, say that you have to rely on luck to get it. While it is not imperative to obtain every Seru, I found myself never proceeding until a new Seru was captured for all of my team. When you do acquire their power, you can use them to deal massive damage to your foes or heal your party. The more they get used, the more potent they get. Magic plays a helpful role in the game, and it is unfortunate that the Seru catching system is based more on chance than anything else.

So, how do I feel about the battle system? Back then, I hated it. Battles took too long because of you constantly having to Spirit and build up AP to use powerful attacks. Now, I have found the battle system to be enjoyable. Battles still take long, but they are also fun and easy to get used to. Do not misunderstand; this is a very difficult game. Boss battles are brutal if you do not level grind. While the grinding may turn some off, it is necessary and rewarding to do so. Learning new Arts and acquiring Seru powers makes you feel all good inside. Also, as you proceed through the game, your Ra-Seru will level up and become more powerful. The battle system in Legend of Legaia was unique, interactive, and ultimately enjoyable.

The Poor Warriors.
Your characters will lay the smack down on their foes. However, the foes will also lay the smack down on your characters. This is where the towns come in. Here, you can rest up at an inn for your future travels. You can also shop for new items and equipment. Money was one of the biggest problems of the game. Monsters barely leave any money after they die, and new equipment is VERY expensive. Thus, you have to either grind to earn enough cash, or proceed on your adventure without the best equipment. Both decisions are equally lame. Monsters hit hard, and boss monsters hit harder. While I never saw the game over screen, there were times I was worried that I would. Owning the right equipment would have made some fights less stressful. The towns are full of things to buy. Unfortunately, with money being such a problem, it is hard to afford new things.

Misty and Marvelous.
For an early Playstation game, Legend of Legaia is beautiful. By the graphic standards of today, Legend of Legaia still looks good. While the 3D polygons outside of battle look distorted and blocky, they are still expressive and colorful. In battle, the graphics truly shine as you see realistically sized characters that react with a full range of motion. When an enemy gets knocked around, they really get the daylights beat out of them. Whether it is a simple kick or a mighty Art, you can feel the pain getting delivered to your foes. Magic looks great as well, despite the fact that some of the spells suffer from taking too long to finish. However, one negative aspect of the battle graphics comes with slow down. Characters will execute their more complex moves slower than normal attacks. What stinks about this flaw is that characters will say their attack normally, but it is not timed with the attack motion. Many of the locations are full of Mist, but this does not hinder vision or the great looking, pre-rendered backgrounds. The world map and the towns all look great with or without the Mist. Legend of Legaia has excellent graphics, bottom line.

Timeless Classics.
One thing I remembered actually enjoying from my first experience with Legend of Legaia was the music. The same enjoyment stood the test of time because Legend of Legaia has an excellent soundtrack. The over world theme, the boss battle themes, the town themes, and all in between were well composed. I recommend hunting down the OST so you can enjoy these great tunes. With the sounds, every punch, kick, and slash sounds dead on. There is a bit of Japanese voice acting in the game, but this only happens during battle.

Where Legends are Born…
After finishing some side quests, learning every Art, acquiring nearly every magic spell, and level building until my characters were tough enough to finish the final boss, I clocked in 45 hours of game time. Every hour was well spent, even when I was level building. While there is very little reason to go back for more, there will come a time when I will replay the entire game all over again. One thing is for sure: I am glad that I gave Legend of Legaia a second chance. It does have a few flaws, and it can be a challenge to even the most hard-core RPGgamer. Luckily, there are so many good things going for it that the flaws end up becoming little to worry about. Those looking for a new RPG to play should set their sights on Legend of Legaia. Just be sure to not make the same mistake I did and give up early on. Stay with it, because you will be glad that you did.