I knew I should have worn my Burberry raincoat!

Hyperdimension Neptunia gives you a bad first impression of what will eventually become an entertaining series. 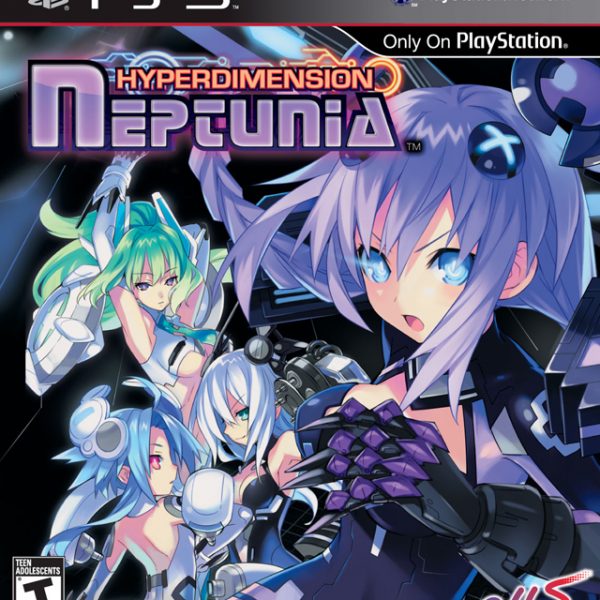 Author’s Note: This review was originally published on June 28th, 2011. The first time I reviewed it, I gave it a 3/10. My new score is more fair, but it’s still a very tough game to recommend to anyone.

This review has now been edited to reflect my views on my second trial of Hyperdimension Neptunia. While a lot of this stuff is still the same, the game is not the original 3/10 I gave it. Still, it is a hard game to recommend because everything, and I do mean everything, about it is very different than what you’re used to with video games.

When you mix Idea Factory, Compile Heart and Nippon Ichi in equal portions along with a dash of Sega and a sprinkling of anime quirkiness, the recipe sounds like it could be either perfect or one of disaster. For the casual, and even some veteran players, it will be recipe for disaster. That said, those who are in the niche of the niche will find something great here. That’s what happened in Hyperdimension Neptunia for the PS3.

For everyone, HDN has two good things going for it: the presentation and the story. Being the shallow person that I am, let’s cover the graphics. They’re gorgeous. Fans of Trinity Universe will see that the same style has been used. The 3D anime models move beautifully as they explore environments inspired by various video games. In fact, they’ll fight monsters who have that same inspiration. HDN will give you plenty of reasons to squeal with glee when you recognize a familiar 8-bit sprite for a special attack. An interesting thing to note is that you can upload pictures of yourself or your friends with the PS3 camera and use them in special attacks. They don’t cause any extra damage, but it’s still fun to see someone’s mug on the screen surrounded by crazy, anime madness. Alongside the 3D models and environments, you’ll notice that giant, moving portraits appear during conversation. As expected, they’re stunning. HDN features a cast of femme fatales inspired not only by anime, but by the major current generation systems and developers. The nods they give to their respective companies is creative and beautiful. On the audio front, you’ll hear solid voice acting in either English or Japanese. Sound effects are as they should be. The music needs a bit of work, but given the fact that there is a bunch of 8-bit era humor, some of the synthesized tracks fir perfectly.

The other feature that gives HDN some points is the story. The game takes place in the world of Gameindustri, which is divided into four regions: Planetptune, Lastation, Lowee, and Leanbox. Each region is unique but they all have a building known as the Basilicom, a place where the residents of the region worship the goddess. If you couldn’t tell by the names, the regions pay homage to the current systems. Furthermore, they’re colored to represent the consoles as well. It’s a unique setting and with it comes a variety of hilarious video game references. The story itself stars Purple Heart. During a fight with the other goddesses, Purple Heart plummets to Planeptune and reverts to her human form: Neptune. Having no recollection of who she is, she meets up with a nursing student named Compa. These two ladies eventually meet a cast full of characters that only the creative minds of anime could come up with. When the characters come together, hilarity usually ensues.

Unfortunately, the laughter stops when the story stops progressing due to tedious dungeons and shoddy battles. If you have a negative view of Idea Factory, then you should stop reading here. However, those that have been able to adapt and enjoy the quirkiness will likely feel right at home. If you played Trinity Universe, you’ll pick up on the exploration with ease. You control your character as they walk throughout the dungeon. Depending on who is in the lead, pressing the square button will execute an action. With Neptunia in the lead, she will bust out a giant hammer that can smash certain walls. Other characters have abilities that will be just as useful during the trekking. During the journey, you’ll be given a goal to reach that usually houses a boss at the end. Getting to the boss means battles. There are lots of battles and those who are impatient will likely get frustrated.

In the main menu, you can assign buttons to moves and these moves can be used together in a combo. Moves are learned as characters level up. Moves cost a certain amount of points if you wish to use them in battle, so proper allocation of the right moves is necessary. With a vast amount of combinations, there is the potential to map your favorite moves to buttons and essentially sail through the game. When Neptune reaches a certain level, she becomes an unstoppable killing machine. On the one hand, I’m fine with actually being handed an easy Idea Factory game. On the other hand, the rest of the characters tend to lose their usefulness and get swept under the rug. All characters have unique weapons and the ability to shoot bullets. Bullets in this game can be enhanced with elements. Since each enemy has an elemental weakness, the most common strategy I’ve seen is people exposing the right element against the enemy and going nuts from there. Most of the time, you’ll be mashing the L2 button to skip all animations and carry on with the quest. Battles are still tedious, but once certain skills are learned they can end in a matter of moments. The worst thing about the battles is that you can’t heal in the traditional way. Instead, you have to allocate points to determine when certain items get used. It’s ridiculous. I understand a desire to be unique, but Idea Factory has been scolded time and time again to get the battle system right.

Thus, recommending this game to you is difficult. I enjoyed after a second chance, but there is a chance you may not click with the oddities of this title. If you decide to suck it up and see the wonderful script, you’re looking at 20 to 30 hours of game time. Those who are trophy hunters will have an easy time getting most of the trophies. In conclusion, this is a great game for someone like me. At first, I’ll admit I was not impressed. Heck, I was angry. However, my tune has changed for the better. This is not a game for everyone, but there are those out there that will resonate well with this title and enjoy all it has to offer.