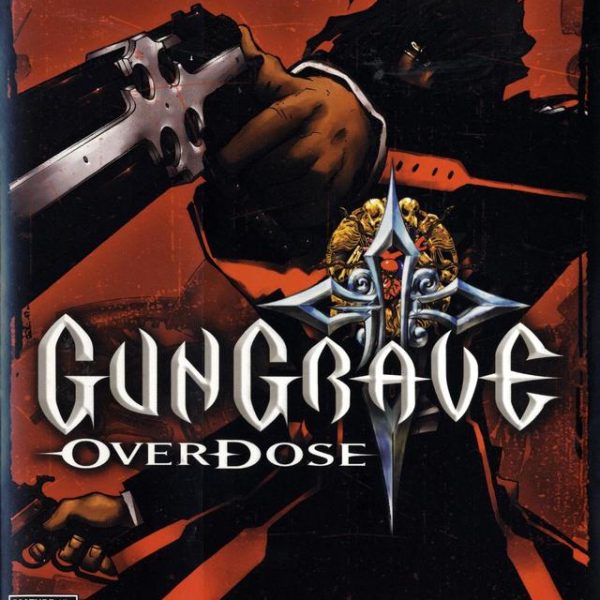 While rough around the edges and filled with a few questionable design choices, Gungrave was a fun action game. It had a creative narrative, over the top action, and an awesome protagonist. When I learned that there was a sequel to it called Gungrave: Overdose, I was hoping that some of the issues I had with the first game would be addressed. Overdose has a stylish look and an enjoyable story. Sadly, the game is frustrating due to a difficulty that can best be described as messy. There’s a lot wrong with Overdose that makes it hard to recommend, and ultimately, makes it worse than its predecessor. Gungrave fans may still get some enjoyment out of it, but even that’s a stretch.

Gungrave: Overdose takes place after the first game. The Millennion crime syndicate is gone and the drug known as Seed vanished with it. Brandon Heat, better known as Beyond the Grave, enters a slumber as peace returns. Three years later, signs of Seed are resurfacing up in society. Grave is awakened by his friend Mika to put a stop to a new threat. Along the way, he’ll encounter new allies that will assist him and new enemies that want nothing more than to keep Grave six feet under.

Overdose starts with a literal and proverbial bang. The excellent narrative plays out in beautiful celshaded movies and stills. Whether you’re watching the next story bit or playing a stage, the game always looks amazing. The tale is entirely voiced and sounds great. It’s a shame that the music is an afterthought. There are some snazzy tunes that play during boss battles or key events, but otherwise the game has no music playing.

The bad news is that the story and look are the game’s best features. In other words, playing Overdose is an unpleasant experience. It gets worse and worse the further you get. Don’t let the game’s strong start allow you to think otherwise because at first, things seem fine. The game makes you start with Grave, but after completing the first stage you’re able to start a new game with two new characters to the series. The first is Rocketbilly Redcadillac, a guitar playing specter that uses his instrument to electrify his enemies as he shreds. The other is Juji Kabane, a swordsman who uses dual gunblades to slice enemies up close and pelt them with bullets from afar. In truth, all characters play about the same. Juji has better melee attacks, Billy has better long-range attacks, and Grave is balanced with both.

The square button is used to fire bullets and charged shots. The circle button is used to perform a melee attack, which can also be used to deflect rockets. As you rack up hits and kill, you’ll gain Demolition Shots. These are great for clearing rooms of enemies, and they help restore your character’s shield. The shield can regenerate over time but having an ability that both damages your foes and quickly restore shield power is critical. Your shield protects your health. So, when the shield is gone, you’ll start taking damage. There aren’t any items lying around the stages to restore health – just like the first game.

And, just like in the first game, the camera moves as slow as your character. Agility isn’t any of the character’s strong suits, either. Dodging is clunky, and activating a guard is a finnicky affair. The game is intended to be played in such a way that you pepper your enemies with bullets from afar, knock the close ones away with melee attacks, build up your Demolition Ammo and use said ammo to restore your shield. It sounds like it would be a solid formula for a smooth action game. Around the fourth level, things take a turn downward. Enemies upon enemies upon enemies will swarm your character with bullets, blades and rockets. Within in seconds your shield will drain, followed by your health. You’ll get knocked to the ground and slowly get back up, only to get knocked right back down.

The rhythm that the developers at Red Entertainment intended is nowhere to be found; you’re better off spraying and praying. Things get really ugly during the later boss battles. While the game has a bunch of checkpoints, the problem with restarting from them means your score resets and your end of stage bonuses become miniscule. Higher bonuses mean getting closer to unlocking new Demolition Shots, which are the one thing that gives your character a fighting chance. This happens even when playing on Easy. I can only imagine how much more frustrating all of this would be on higher difficulties. It’s not the game is too hard or requires the player to “git gud.” It’s just poorly designed.

If you do manage to find a way to complete the game’s challenges, then you can expect to finish the game in about 10 hours. There’s a lot of potential for replaying Overdose due to different characters, unlockable extras, and more. But, doing so would mean putting up with the difficulty. I can’t ever see myself giving Gungrave: Overdose a replay. If I ever want my fix of Beyond the Grave, I’ll watch the series or replay the first game.

Overall, 4/10: Gungrave: Overdose is an unpleasant experience. It looks great and tells a cool tale, but getting through it is such a hassle that even fans of Gungrave will need to proceed with caution.