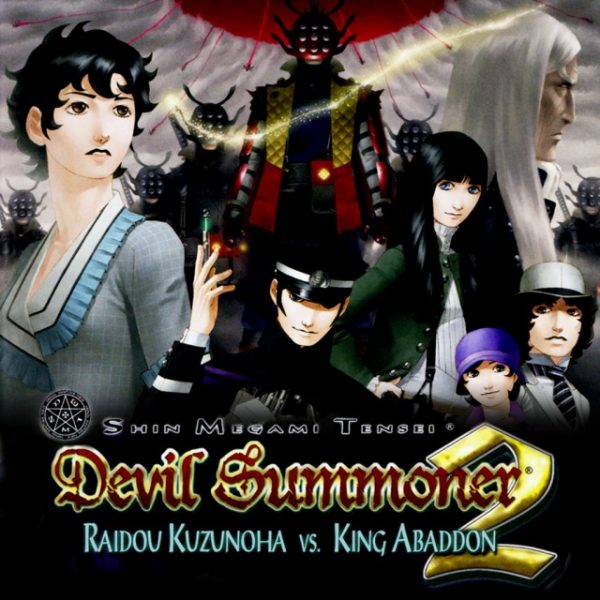 Author’s Note: It’s not necessary to play the first game before playing this one. You can skip Soulless Army and still fully enjoy King Abaddon.

Never in a million years would I have thought that Raidou Kuzunoha (and his sideburns) would receive a sequel. I figured that the first one was such a letdown that nobody in their right mind would want to spend the time and money to create (or play) a follow up. But, it happened. Raidou Kuzunoha is back in another long titled game called Shin Megami Tensei: Devil Summoner 2: Raidou Kuzunoha vs. King Abaddon. How does this game compare to the first? Were previous issues addressed? Were there improvements? Continue reading to find out.

The presentation in Devil Summoner 2 is essentially the same as the previous adventure. Atlus once again captured Japan beautifully in another gorgeous game that is complimented by a jazzy soundtrack. Raidou will have the chance to revisit areas from the previous game, but he’ll also be taken to new locations such an underground, interconnected cavern and a tower that rises into orbit. New and familiar demons often featured in the SMT series are everywhere. Similarly, there are new and old music tracks that get played during the adventure. During key moments in the story, some stunning movies will play that really show a polished upgrade from the first title.

We’re back in the Taisho year 20. The citizens continue to get caught up in the intrigue of the new age; adjusting to new ways of life in a city where old traditions typically took precedent. Lately, folks seem to be talking heavily about the concept of luck. Some people have lots of it, while others have none. Meanwhile, a woman named Akane Narita has traveled to the Narumi Detective Agency to file a missing persons report. Narumi’s assistant, the devil summoner Raidou Kuzunoha the 14th, has been asked to head the case. Raidou doesn’t realize that the luck, and the fate, of the entire capital is at risk.

The story in King Abaddon has a weak start. Akane’s plight doesn’t fully come into perspective until a couple of hours into the story, and even then, things aren’t as intriguing as they were in the first game. Edo in the 1920s is still a fantastic setting and Raidou gets reunited with old friends and encounters new faces, some of which create interesting moments. But, the story both moves and feels like a drag most of the journey. Part of it has to do with the translation. Many of the characters during most of the game’s wordy dialogue events come from the “countryside”, and their dialect was written to reflect that. It’s not only difficult to read, but it feels contrived. Once again, Raidou is a silent protagonist. However, the choices he makes will effect his alignment – a feature often found in other SMT titles.

Playing through Raidou’s journey to help Akane will feel familiar to anyone that played through the first game. The good news is that there have been some great improvements. The bad news is that there are some new annoyances that make it hard to appreciate said improvements. While exploring in towns, Raidou no longer has to worry about getting into random battles. In fact, the encounter rate seems to have been slightly reduced in hostile areas. But, I’ll get to combat in the next section. Raidou can mosey around towns, using his demons to uncover secrets, participate in a variety of side quests called Case Files, and shop for new goods. Victor and his demon fusion abilities are back. New to this game is the ability to create weapons for Raidou with various materials. Weapon fusion is an expensive but fun way to turn Raidou into a powerful warrior.

The most noticeable area of alteration is the combat. Let’s start with the good. First, Raidou can summon two demons at a time instead of one. Also, summoning a demon no longer requires Magnetite. Instead, Magnetite is used by your demons when they perform special attacks and/or team attacks with Raidou, and it’s used when Raidou performs a special attack with the push of the triangle button. Raidou’s combat prowess has also improved. Along with regular and special attacks, he can guard, swiftly dodge, and fire his gun. His gun no longer requires ammunition, but the downside is that there is only one type of bullet. Still, not having to worry about purchasing more ammo is a relief. Raidou can pop off six shots before needing to reload, which takes a second to do. Exploiting enemy weaknesses will stun opponents. In doing so, Raidou and his demons can wreck enemies for extra damage and refill Magnetite. So, combat becomes a dance in which Raidou’s posse exploit an opponent with powerful attacks, gang up on the opponent to regain MAG, and repeat until the enemy falls. Outside of some issues with slowdown when things get too chaotic, it makes for an exciting and smooth combat formula…

…at first. During my 40 hour adventure, it felt like the game wanted to irritate me at every chance. Just when I thought I was in a groove and beginning to enjoy myself, the game would pull a fast one. The biggest offender was with recruiting new demons. Instead of weakening enemies and trying to trap them in tubes, my least favorite SMT feature returned. Indeed, I’m talking about Demon Negotiation – a feature that lets you recruit new demons via conversation. The problem is that it’s entirely reliant on RNG. Another issue were the times when demons would gain the first strike on the party for no goddamn reason. Raidou and his cadre would CLEARLY be ready for combat, but the battle would freeze the enemy party of weaker demons would land first strikes. It was ridiculous. Perhaps even worse than that was when the demons would interrupt you mid battle and strike up a conversation. Whether or not you wanted to recruit the demon was besides the point; demons would just stop the battle to strike up a dialogue which usually ended up with Raidou taking damage.

Going back to the theme of luck, there are critters called Luck Locusts that you can capture that increase Raidou’s luck stat. They can be used in combat to give a random perk. Conversely, there will be times a bad luck roulette will spin before a battle begins that results in some sort of curse that will last the entire battle. Using a Luck Locust can remove it. It’s a neat feature, but as a result of all the other little annoyance that kept popping up in combat, it was hard to appreciate all the things combat got right. Actually, it was hard to appreciate all of the good things in this game. Just like the first game, Shin Megami Tensei: Devil Summoner 2: Raidou Kuzunoha vs. King Abaddon is a tough game to recommend. There are improvements, but I’m not sure they’re enough. As Atlus continues to develop more games in the Shin Megami Tensei series, I hope that they’ll revisit Raidou and give him the type of game that’s of the same caliber as Nocturne or Digital Devil Saga.