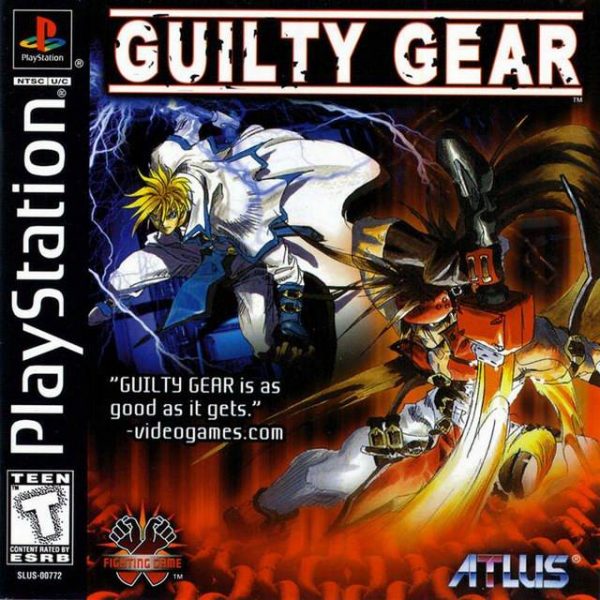 As a publisher, Atlus rarely dabbles in 2D fighting games. Thus, it was quite a surprise for me to see that they were the ones responsible for bringing over the first game in one of the most revolutionary 2D fighting series I’ve ever played. You have to start somewhere and Guilty Gear is indeed a great place to start. Much to my surprise, it has aged very well. It’s got the look, feel and sound of it’s more popular predecessors. If you’ve been following the Guilty Gear franchise since day one, this review may not excite you too much. However, if you’re like me and have hopped from game to game in no particular order, you’ll be in for a surprise. Guilty Gear, despite having tons of sequels, still manages to hold it’s own in the 2D fighting genre.

The world of Guilty Gear takes place on earth in the far future. Magic and technology have combined to create beings known as Gears. Gears are now being hunted and a tournament is taking place to…ok I’ll stop. The point is, there is a small story in Guilty Gear. Want to see the origins of the rivalry between Sol and Ky? Want to see where Chip and Millia come from? Want me to stop asking questions like this? Well, then check out Guilty Gear. While your character count is limited, keep in mind that later favorites don’t enter the GG story just quite yet.

Anyways, the story of Guilty Gear exists. Now onto the good part. Guilty Gear has a training mode, a versus mode, and the arcade mode. Fighting in Guilty Gear is fast and crazy, totally befitting of it’s anime setting. Characters can jump, dash, air dash, double jump and perform the usual acrobatics that you’ve learned to love in later releases. Best of all, with all of the action, there is no slowdown. The Playstation’s power is not something to be underestimated. If I were an executive at Capcom, then I’d be shaking in my boots at the sight of games like Guilty Gear. Especially considering the combos you can create. With the proper timing and move execution, all characters in Guilty Gear are capable of performing powerful combos with their special moves. Sure, you can do your “hadoken” motion, but the real fun lies in pummeling a foe into submission.

Guilty Gear plays well, but you might be wondering if the presentation can still hold up to current 2D fighters. The answer would be a 99% yes. The music still rocks. Heavy metal tracks for the win. Pure hard rock fans will notice fun references to the music genre thrown in the game. The punching and slashing sounds great, too. Voice acting is entirely Japanese. Graphically, Guilty Gear holds up well. Unfortunately, there are some pixel issues. Certain special moves like Sol’s Gun Flame or the dolphins that May summons have a bit of a jagged edge. A minor complaint that doesn’t effect the game play at all.

When reviewing 2D fighting games, it’s difficult to elaborate on each feature. Guilty Gear, despite being over a decade old, still has these said features that make this genre so fun. There are a few issues, of course. Besides not having much to offer beyond arcade and versus mode, the difficulty will challenge seasoned fighters. You have infinite continues, and you’ll be thankful for this. Even worse, unlocking the secret characters is only good if you plan on using them in versus mode. That’s right, even when you acquire them, you’ll be limited to their use. Still, the characters you’re given should give you plenty to work with. Guilty Gear’s flaws are few. This game shows the creativity of Arc System Works and thanks to Atlus, you can see the initial fruits of their labor. Guilty Gear might be old, but like Sonja Morgan in a room full of younger men, it’s still got it. Fans of 2D fighters should find a copy of Guilty Gear and get ready to rock.