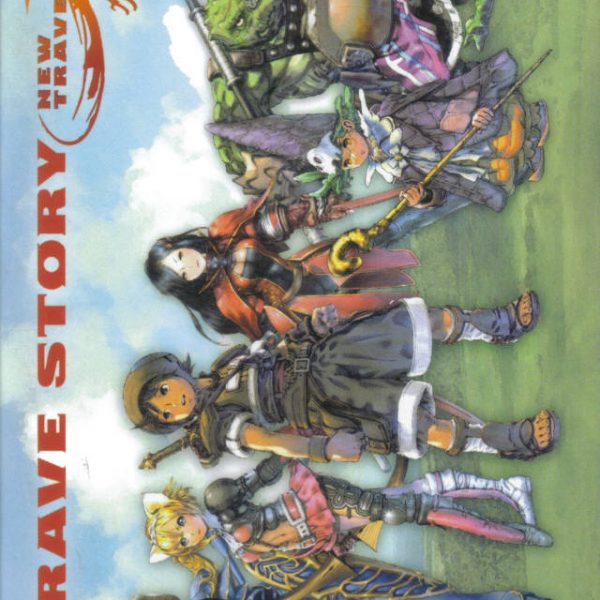 Author’s Note: This review was originally published on July 8th, 2008. Like other reviews around this time, it features “witty” taglines that designate each section. A part of this review has been quoted in Wikipedia.

The Brave Story has been around for quite some time. Starting off with a novel by Miyuki Miyabe, it has transcended various forms of media through the years. The manga was the next form of media, and was met with relatively high success. After that, the anime rolled around and was also enjoyed. Obviously, another one of these forms of media happens to be in the video game industry. While there are various differences from the original work, Brave Story: New Traveler for the PSP has taken an original idea and created a new formula for allowing people to enter the world of Vision. Anyone looking to escape reality in an engrossing video game world should take a look at Brave Story: New Traveler.

A New Wish. A New World.
Your journey begins with a boy named Tatsuya and a girl named Miki. The two friends are sitting on a bench, but Tatsuya is too distracted to pay any attention to Miki because of a video game he is playing. Miki runs away upset. When Tatsuya finally finds her, she is in a mysterious coma. Tatsuya, very upset, ponders what to do. It is then he hears a voice stating that he can save the life of his friend if he goes on a journey through the world of Vision. A magical door appears before him, and he bravely enters in order to get his wish granted.

The story sounds simple, and it is until you reach the end of the game when various twists get thrown in. Luckily, these twists are exciting and make finishing the journey quite rewarding. This is not to say that the events that unfold before the end are bad, they have just been seen many times before. However, the events that unfold from beginning to end are displayed with the help of amazing characters that develop quite well over the course of the game. You will see each one go through their personal struggles and coming out on top. Most importantly, you will see the character build a strong relationship with Tatsuya. In the end, the story was satisfying. The theme of friendship was brilliantly told, even if it takes a while to pick up the pace.

Back to Battle Basics.
Brave Story: New Traveler has you fight enemies in a simple, turn-based battle system. You can have up to three people in at a time, each with their own unique set of skills. Skills are used with Bravura Points, which are slowly recovered each time your character performs a regular attack. At the start of a battle, you chose your actions and then watch everything unfold. Those with higher agility act first, and often times having high agility is crucial for pulling off healing or support spells. Both sides will attack until one side is finished. The battles have a tendency to be on the easier side. However, some of the bosses in the side-dungeon or near the end of the game are truly horrific. Still, in my playing, I never once received a game over.

Despite these basic battles, Brave Story has some new things thrown in. If your character finishes off an enemy, they may gain an extra attack and immediately attack another enemy. Furthermore, the more you battle with your favorite party members, the sooner you can learn the very potent Unity Skills. These team attacks drain your magic, but are excellent to use in any situation. Finally, your characters can obtain a Brave Awakening by performing certain side quests. These add new attributes to your characters in battle. While battles have a tendency to be too random for their own good (as in Tales of Phantasia’s Morlia Gallery random) they are easily finished and take little effort to understand.

Brooches and Birds.
When you are not in a battle, you can do your standard RPG activities. Looking for some well written dialogue about the events going on? Then you can talk to the many locals in town. Want to go shopping? There are plenty of stores for you to upgrade your equipment. Need some extra income? Take a request from the guild. Simple, yes? There are other things that you can do as well. Monsters often time leave parts after you kill them. These can be used to create accessories. There are plenty of accessories to make in this game and this feature happened to be one of the more exciting ones Brave Story had to offer.

The main mini-game is called the Goal Finch network. Using a net, you can capture adorable little birds that you can use for Bird Brawling. Bird Brawlers are everywhere, and if your birds defeat their birds, you win a prize. Despite the fact that this was the main mini-game, I took no part in it because it was not fun in the slightest. Yes, the birds were cute, but you had little customization options for your birds and the battles were controlled strictly by the artificial intelligence. Ironically, the AI followed suit because it was that of a bird-brain.

Clearly Seeing Vision.
Vision is a gorgeous 3D world with character designs to match. The characters are well designed, detailed, expressive, and fluid. Monster designs range from adorable to intimidating, despite the fact that certain monster designs are the same as others, just differently colored. One of the most entertaining things that happen in battles is when any attack is landed: you will see Batman-esque words such as, “BAAAAM!” or “SCCIIITH” that add that little bit of gumption to the attack.I thought it was fun. You will also see that your environments are vast as you explore mountains, deserts, caves, and highly detailed cities. No complaints in the graphic department.

The Sound of the Brave.
Yes, I realize that the tag-line for the music sound section is cheesy, but you know what? You try being creative and trying to think of new tag-lines for every section and every written review! Not so easy, is it? Anyways, the music in Brave Story was done relatively well. The battle theme was the one that got stuck in my head. The rest were well composed, but not memorable. The sound was done well, too. In battle, you can choose to have either English or Japanese voices. In the cut scenes, you will listen to the English voice acting. Luckily, the cut scenes were well scripted and the voice actors do a good job at giving the colorful cast of characters that extra bit of life.

Close the Door. Close the Book.
By the time Tatsuya got his wish granted, I was about 25 hours into the game. I did a few side-quests and went out of my way a few times to get materials for accessories, but that barely put a dent into the game play. The game is short and sweet. It is good for RPG beginners, but the veterans will also be able to find something enjoyable from it. The story was good, the graphics were good, the battles were good, and the sound was good. The game was good, and the theme of friendship is one that will definitely make you rethink the importance of friends. Traveling across every medium of entertainment, Brave Story: New Traveler on the PSP is an adventure worth checking out.