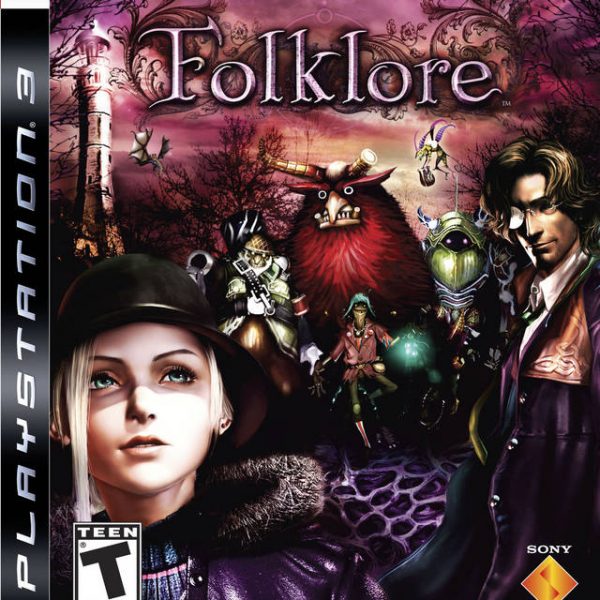 At this point in the PlayStation 3’s life, there are plenty of fantastic RPGs to enjoy. However, when it was first released, this genre was severely lacking. About one year after its launch, an obscure action RPG was released for the PS3 called Folklore. This is another game that I wish I played sooner rather than later. Folklore is a fun game that has aged well and provides a dark fairytale setting that will make you feel as though you’re playing something from Tim Burton. But, some odd story-telling methods, slow pacing and repetitive combat tend to stall the momentum. With a large variety of RPGs available for the PS3, it’s easy to overlook Folklore in favor of something else.

Folklore has two main characters. The first is Ellen, a young lady that has been drawn to the village of Doolin. After receiving a letter from her mother who has been long deceased, she feels the need to head to this mysterious village in Ireland’s coast and investigate the truth behind the letter. The second is Keats, a handsomely gruff journalist that works for a magazine called Unknown Realms. While doing some research, Keats receives a call from a woman saying that she is in Doolin and that the Faerys living there will kill her. Having dealt with his fair share of prank calls, Keats decides he has nothing better to do and heads to Doolin just to see the village. Ellen and Keats meet and their encounter will let them learn the truth of Doolin and the realm known as the Netherworld. Ellen and Keats have intertwining plots, but they also have their own set of tasks to deal with. The story is unique in that it splits its time between Doolin and the Netherworld, with various NPCs involved in each. The townsfolk of Doolin are a shady bunch that don’t take kindly to new faces. The Netherworld is home to Faerys of all shapes, sizes and origins. It sounds like a great combination for a strong story. At times, it is. Other times, the narrative stalls and takes a while to regain its momentum. This is especially true during the so called comic-style events. The story can advance via typical dialogue sequences, stunning cut scenes or stop and go scenes (aka comic-style scenes) that move too awkwardly. It was an interesting idea, but its clumsiness doesn’t work for me.

If anything, I wish that the developers implemented more CGI movies. These gorgeous events are a sight to behold. Folklore’s visuals are magnificent, even during the comic-style events. Doolin looks like a rundown, coastal village that is filled with history and intrigue. The Netherworld is colorful, mysterious, inviting and captivating. Characters move well and fight creatively designed enemies that range from adorable to domineering. Watching Ellen’s braided ponytail flip back and forth is reminiscent of Shinobi’s Hotsuma and his stylish scarf; a nicely added touch. The music in Folklore is also wonderful. With the game’s gothic fairytale setting, each song is distinctive. They range from haunting to plucky; depending on the situation that befalls either Ellen or Keats. Other than shouts during combat, most of the game lacks any voice acting. However, during the CGI movies, you will hear some solid voice acting.

As mentioned, you will be taking control of both Ellen and Keats in both Doolin and the Netherworld. Each character has their own set of chapters that will often cause them to meet with each other. For the most part, their tasks are similar. In Doolin, they’ll act as detectives. In order to get closer to the truth, they have figure out the right people to chat with and use the right items. Once the tasks are done in Doolin, it’s off to the Netherworld. This is where combat takes place. Ellen and Keats are able to capture the abilities of their enemies, which are referred to as Ids. Appropriately, the enemies in Folklore are called Folks. One Folk can be assigned to the four face buttons. With the push of a shoulder button, you can swap Folks as you see fit. Absorbing Folks usually requires you to lock on an enemy when with the R1 button and flick the SIXAXIS controller. This is a clever way to use this normally gimmicky aspect of the PS3’s controller. With a variety of Folks that can be captured and powered up, Ellen and Keats have plenty of options for fighting the Netherworld’s multiple enemies. Folks are also used to solve puzzles. Again, there are some interesting ideas here, but the combat ends up being too repetitive as you button mash with your favorite Folks. Ellen and Keats have unique abilities, but it still doesn’t help the monotony. Ellen can cloak herself temporarily. Keats can transform into a powerful being for a limited time. Despite some intense boss battles and plenty of Folks to find, Folklore’s combat starts feeling repetitive by the time you finish the initial chapters.

Folklore will last about 20 hours if you take your time, explore thoroughly and participate in side quests. Obviously, it’s relatively short for an RPG. I can’t help but to wonder that if I played this game earlier in the PS3’s life, my enjoyment for it would be greater. There are definitely some great ideas in this game. It just feels lacking in other areas and has a tendency to slow down just when things get interesting. If you have run out of RPGs to play, you might enjoy Folklore.

Overall, 6/10: The gothic fairy tale setting and action game play might be enough for gamers to enjoy all Folklore offers. But, it’s those same aspects that may turn away others.