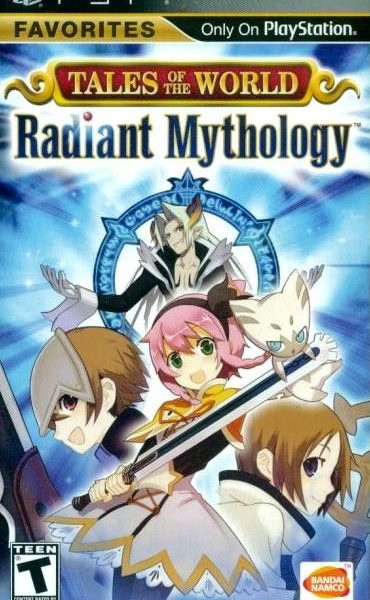 Author’s Note: This review was originally published on August 23rd, 2007. Like other reviews around the time, it uses”witty” taglines to separate each section.

You know the cliche; question, “If you could meet someone, living or dead, who would it be?” Well, my answer would be the person Namco who dictates which Tales game the USA receives. I want to know why this person would rather release Tales of the World: Radiant Mythology to the USA instead of something like Tales of Destiny 2 or Tales of Rebirth. Am I thankful for getting a Tales title? Of course, but that does not mean I am not annoyed and confused by the logic of releasing a spin-off sort of Tales game instead of one that is an actual entry in the series. TotW is a fun game, but it lacks that Tales charm that most of the games have.

Saving Trees
In the world of Terresia, the people live under the blessings of the World Tree. The World Tree grants both mana and protection to the inhabitants, but it was unable to protect them when the Devourer struck. This demon from another world consumed nearly all of the land, and the World Tree started to become weaker. The mighty tree then gives birth to you, The Terresian Descender, and it is your job to help the people of the world and find out what truly is behind the cause of the Devourer’s attacks.

The Tales series usually have stories that are a tad clich&eacute;, but they are also fun. The plot in TotW is uninspiring. This is partially because your character is a mute. Your “partner” and TotW token critter mascot, Mormo, does all of the talking for you. I use the term partner loosely because all Mormo does is try to look cute while your character does all the dirty work. In fact, I’d give anything to twist his little neck off and-ok, never mind. The point is that there is very little character development. The majority of the characters are from previous Tales games. This is both a pro and a con. On the positive side, you get to see some old friends from some of your favorite titles. On the other hand, nothing has changed about them. What really gets me is that while there are plenty of them to get to know, you cannot have all of them assist you in battle. That is like waving ham in front of a dog you do not plan on feeding! Or like waving a shirtless male model in front of-ok, never mind.

Ad Libitum Members Fight for Love
This edition of the Tales saga plays differently than most when it comes to advancing the plot. From the get-go, you join a guild service called Ad Libitum. By performing bland fetch quests, slaying certain monsters, creating various items, and delivering messages you earn fame points, as well as money and tools. When you get enough fame points, you are able to perform quests which advance the story. Now, I love dungeon crawling games just as much as the next person. Yet, for some reason, I was so annoyed by performing the non-story related quests for the guild. Back when I played Atelier Iris 3, I enjoyed every quest the guild threw at me. In TotW, it’s a different story. Near the end of the game, I was skipping over potentially helpful quests in order to get to the final dungeon.

Arts and Crafts
One of the more enjoyable features of the game was the craft system. Not only are you able to cook, but you can make your own items, tools, jewels, and base materials. As you continue to craft, your skill level goes up. The higher the skill, the more fun stuff you can make. Another thing you can do with the crafting system is outfit your weapons and armor with metals. Doing this will give them a nice increase in stats. The one downside to the crafting system is that you can breeze through the game never making anything. Some quests may require you to make something with the craft function, but besides that, you can never open up that menu and get by easily. The rest of the options in the easy to navigate menus, such as items and Artes, will be used as frequently as they have been in previous Tales titles.

Travel Made Too Easy
One thing I’ve always enjoyed about the Tales series is that they always include world maps. This is not the case in TotW. Instead of moving from location to location, you can just point and click where you want to go next. In fact, this is how it is in the towns. It may be quicker than world map travel, but that was part of the fun of a Tales game. I’m surprised they didn’t include that option in the dungeons. Luckily, there are plenty of interesting people to talk to in the towns. This is especially true with the Tales characters. There are tons of little skits that play out between the various characters, many of which are quite funny.

Battling at the Abyss, Sorta…
When you take upon a quest that involves you going to a dungeon, chances are you are going to fight. The battle system in TotW is very similar to that in Tales of the Abyss. The only major difference is the lack of Fields of Fonons. Your character can move with the analogue stick and the directional pad. However, the former is used for moving away from the enemies and the latter is used mainly for going in for the attack. Besides attacking, your character has a plethora of skills at his/her disposal depending on his/her class. From the start, you have access to only four classes. However, you can unlock more as you proceed. Some of the classes, like the fighter and thief, make the game easy because you can spam the attack button to a job done. But, any Tales pro will chain attacks together with basic, master, and arcane Artes to perform mighty combos. Regardless of the class, you are able to change it at the guild. However, there is a set back to this. Say you are a level 15 priest, but wish to become a hunter. If this was to be your first time turning into a hunter, you will start at level one. Luckily, if you want to change back to a priest, the priest level will still be at 15. Probably the greatest thing about the class system is all the weapons and armor your characters can get. It is not only fun to get new stuff, its fun to give them a whole new look.

During battle, you can switch your playable character on the fly. You can use items, and also issue commands. The AI can be stupid at times, which is actually a first for the series. Another feature is over limit mode. As you give and take damage, a meter fills up under your character’s portrait. If you hit the two shoulder buttons, you enter over limit mode which not only prevents them flinching from an enemy hit, but also greatly increases attack power. If certain requirements are fulfilled, you can execute a mighty mystic Arte, which deals considerable damage.

However, my favorite thing about the battles is having various Tales characters fight alongside you. Seriously, it was so kick ass to have a party of my character, Reid from Tales of Eternia, Stahn from Tales of Destiny, and Luke from Tales of the Abyss. That’s just one of my favorite combinations. The battles in TotW might be simple, and make the game easy, but they sure are fun!

This is the PSP? No way…
The graphics in this game are solid. So solid, you’d think you were playing a PS2 game. No joke. The colors, the polygons, and the environments look beautiful on the PSP screen. Skills and magic also look just as great as they would on a PS2. Probably the highlight of the graphics comes with all of the equipment you can give your character. Really, the possibilities are endless. I was upset to see some of my favorite 2D Tales characters become 3D, but the transition is something I just will have to deal with.

The Sound of Monotony
Listening to some of the battle tracks from previous Tales titles aside, the game has some bland music. I was expecting better, too. Since there are only three towns, and only a handful of dungeons, there is not much selection. With the selection that you do have, most of the songs are short, thus they repeat over and over. Luckily, the voice acting was done exceptionally well. You’ll recognize some voice actors from previous Tales game, and the new characters were voiced fine. Other sound effects, such as blazing fireballs and stabbing spears, sound fine, too.

True Game Plus
The nice thing about TotW comes after you beat the game. You get to keep all of your items and all of your stats. This way, you can easily start the game anew as an entirely different class. However, I am not sure I will be playing a new game anytime soon. The story was nothing impressive, and the constant guild questing ended up becoming more of a hassle than a joy. Some of the story quests were interesting, and fighting alongside some of my favorite Tales characters was a real pleasure, but I hardly see that as a reason to go back for another play through. Maybe some day I will, just to try out a new class. I know others will. Tales of the World: Radiant Mythology left a bittersweet taste in my gamer mouth. I’m happy to see Tales games getting more USA releases, but the higher ups at Namco need to really consider which games should stay and which games should go. A true Tales game has new characters, an interesting plot, and originality. This game has none of those. The Tales series has been going on for quite some time now, and we Americans are fed up with importing and/or left wondering why we cannot play some of the more impressive Tales titles. With Tales of Rebirth soon to be out in Japan on the PSP, all I can do is hope that Namco gives the game a stateside release.