Every console deserves a “best game ever.” Tales of Symphonia is the one for the Game Cube!

Eternal Darkness is, literally, insane in the membrane. 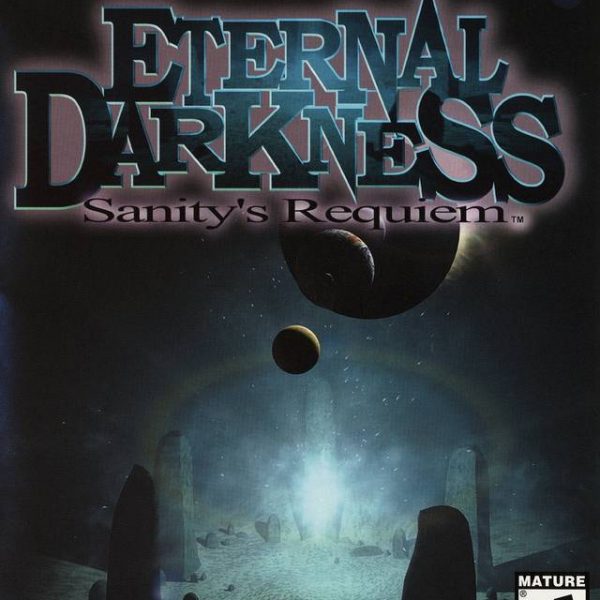 Has there ever been a game that digs its proverbial talons into you from the start and refuses to let go until you have seen it to completion? Despite some growing pains, you persevere from event to event because you need to see what happens next. You hate it when you need to stop playing due to real life events because your curiosity needs to be satiated. When the finale ends, there is a sense of bittersweet accomplishment. That is the case with Eternal Darkness: Sanity’s Requiem. The game starts with a bang and you have no choice but to keep going. There are issues in doing so, but the end result is well worth it. This is a survival/horror game unlike any other thanks to an enormous level of care put into making nearly every circumstance unforgettable.

From the start, it becomes apparent that the player is in for a different type of survival/horror game. We are introduced to Alex Roivas, a sassy and savvy college student that has returned to Rhode Island in order to investigate the murder of her grandfather. The murder scene is gruesome: there is blood everywhere and the culprit decapitated the man in order to throw off the police investigation. Alex takes it upon herself to explore her grandfather’s mansion in order to get to the bottom of the murder. The mansion holds more secrets than one would realize, though. Alex will learn the truth behind her family’s history and the nature of a race called the Ancients in a supernatural story that spans millennia.

The story is great and the way it unfolds adds to its appeal. As Alex, you will explore a giant mansion littered with secrets. One of the first things you will find is the Tome of Eternal Darkness. Alex will find chapters from the tome and the point of view will switch to the character leading that chapter. You will get to play as an Arabian swordsman, a macho firefighter, a doctor, and so much more. While you will only cover four areas, each hero’s perspective changes them in unique ways. Finding out their fate and how it comes full circle to Alex’s fate is a solid method for storytelling. The best part of all is that the story itself deals with more than just zombies taking over a city or wandering into a town covered in ash (although those two things do exist in some capacity). Eternal Darkness’ story involves paranormal and downright creepy villains and plot twists that will get you addicted from the start.

Like I mentioned before, you start the game as Alex and need to uncover chapters in the Tome of Eternal Darkness to find out the truth. The first chapter lets you take control of a man named Pious Augustus. As Pious, you can select one of three paths to take at the end of his chapter. The plot will remain the same no matter which path is taken, but there will be subtle changes. Once Pious’ chapter is finished, you will return to the mansion with Alex and need to find the next chapter. This process continues for twelve chapters. By the time you get to the third or fourth chapter, you will have access to all of the game’s features. Like most survival/horror games, you will have to run through dangerous areas picking up items, solving puzzles and destroying enemies. This is typical for the genre, but Eternal Darkness has game play aspects that set it apart.

Obviously, players have a health meter that needs to remain full. As it decreases, the character will begin to limp. The Tome of Eternal Darkness allows you to cast magic. Using a classic yet distinctive rock-paper-scissors idea, magic is used to heal, solve puzzles, attack enemies and provide support. However, to properly use magic you will need to not only have enough magic power (represented by the player’s blue meter) but you will need to find the right runes, tablets and scrolls. The magic system starts off being helpful, but near the end of the game it is essential. Finally, players have a green meter that represents sanity. Encountering an enemy will drain their sanity. The lower the sanity, the more the player will start to hallucinate. Examples of this include the screen going black and white, the character’s shrinking, sounds of women and children screaming in lieu of the music, the camera angle skewing and the character losing limbs just by walking. If the sanity meter is empty, then their health will start draining. Not only that, but game will troll you into thinking that you are losing it by breaking the fourth wall. Examples of this include false ads for a sequel to Eternal Darkness, the Game Cube “malfunctioning”, or the television getting muted. If your sanity is drained, then your health starts to deteriorate. The sanity meter is a fantastic idea. Not only does it add new levels of strategy to keep you on your toes, but seeing the effects of adds to the horrifying experience. Finally, the foes that you will face are ghastly. All of them are there to end your life as painfully as possible. The zombies in this game easily give the ones in Resident Evil a (lumbering) run for their money. In all honesty, words on the screen aren’t enough to describe them.

This leads me to the worst aspect of the game: the combat. Eternal Darkness reminds me of one of those games that would have been better off without combat or one of those games that could have been a movie. Odd camera angles and slow moving characters are already a recipe for disaster, but when you throw in clunky mechanics, a terrible targeting system and unrelenting enemies that seem to take longer than necessary to kill, you have a nadir of an otherwise solid game. Initially, combat is passable. Most enemies can be finished with a quick decapitation. And hey, you can restore some sanity on a defeated enemy by using a finishing blow. As you start encountering more lethal enemies, the combat shows its awful, nasty colors. All of this is going on while your sanity is getting sapped. Before you know it, your character is a hobbling and hallucinating buffoon. Sure, you can use magic, but moving during the incantation will result in the spell being cancelled and a loss of magic energy. Sure, you can skip combat most of the time but with all of the backtracking you have to do in certain chapters (especially Chapter 10; seriously that chapter can go to Hell) you will still end up facing danger. Boss battles are a real test of patience. Your best option is to bite the bullet and fight off your foes with a variety of melee and ranged weapons. It’s a real shame the combat is so awful because solving puzzles, getting deeper into the bowels of ancient dungeons and slowly unraveling the truth is awesome. There is one bit of silver lining, though: you can save anywhere and I recommend that everyone take advantage of this.

Even if combat is terrible, the environments in which it occurs and the atmosphere surrounding them show that same level of care that was given to the story and characters. While not fully pushing the Game Cube’s capabilities, the visuals in Eternal Darkens encompass everything the genre represents: dark, bloody, decrepit and haunting. There is plenty to explore in Eternal Darkness as you move between Cambodia, the USA, France and Persia. The enemies you face are both creative and vile, and sometimes you get to see them in the game’s multiple FMV sequences. The music further adds to the atmosphere. Whether you hear the pounding of a bass drum, a chorus singing a haunting Latin hymn or some rhythmic tribal chants, there is no doubt that your experience will be magnified. Players will also have to pay attention to the sounds each creature make in order to plan their strategy accordingly when they enter a new room.

Eternal Darkness takes about 15 hours to complete the first time. Since scenes can be skipped, consecutive files will take less time. While I plan on seeing other routes, it will be a while before I do so. As of this writing, the thought of dealing with Chapter 10 and dealing with the combat as a whole turns me away from hopping back into the action again, but I do know that there will be more for me. Fans of the survival/horror genre will be delighted by this title, but most Game Cube owners should give this game a shot due to it being so different. It has some issues, but once you start it will be difficult to stop going through Eternal Darkness: Sanity’s Requiem.