The Dusk Trilogy begins with a bang in Atelier Ayesha. 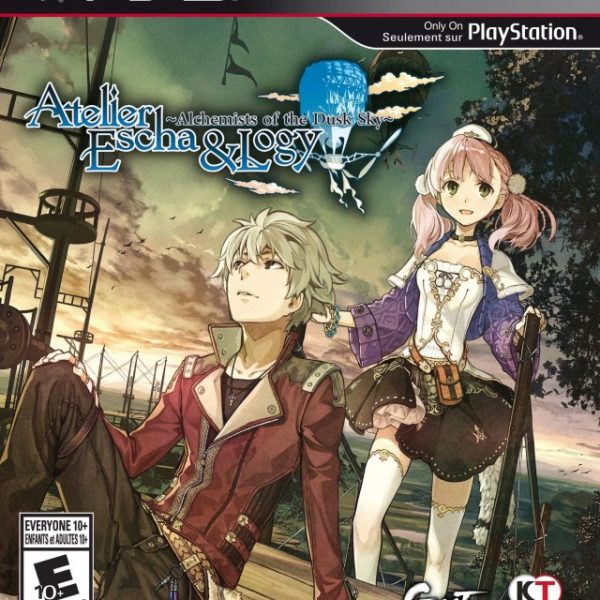 During my time with Atelier Ayesha: The Alchemist of Dusk, I kept thinking about how the Atelier series as a whole has improved substantially. While Americans have had limited exposure to the series, anyone can tell that the games have gotten better with each installment since its humble beginnings in 1997. I kept wondering how Atelier Escha and Logy: The Alchemists of Dusk Sky would improve upon Atelier Ayesha. After all, my 300th review on this website was for that game. The truth is, the Atelier Escha and Logy: The Alchemists of the Dusk Sky made very few changes from the first installment of the Dusk series. Sadly, Escha and Logy feels like a step backwards for the series as a whole, even though I still recommend the game to fans of RPGs.

Unlike Ayesha on a quest to find her missing sister, Escha and Logy actually stars two protagonists that work for the R&D Division in Colceit. The first is Escha Malier. This pink haired, pig-tailed and plucky protagonist lives in Colceit with her father and their guardian, Clone. The other is an engineer from Central City named Logy Fiscario. For the first time in the series, players can decide to play as a male lead. Escha and Logy have been asked to perform odd jobs, but both of them dream of flying in an airship and exploring ruins that hang in the sky. I like how the story feels like it was inspired by Grandia due to the promise of adventure. One problem I have is that Escha feels too familiar. She reminds me too much of Totori. On the other end, there’s the male hero. Logy is a cool dude and I really liked his character. However, he felt out of place as a lead. Players will select either Escha or Logy as their main character, but to see everything and obtain the true ending, they’ll need to play as both characters from start to finish. A normal game is relatively short, but Gust decided to prolong it by making you go through the same game twice. Subtle differences exist, but for those that don’t care about a true ending can play either protagonist and still get the full effect.

Escha and Logy were joined by old and new faces. Linca, the mighty swordswoman, made a splendid returned and was as charming as ever. Nio and Willbell from Ayesha have returned, too. But, they would not get to participate in battle. The new characters that join Escha and Logy were a mixed bag. Threia Hazelgrimm, for example, was a great character. She was easily my favorite new face. Picture a less crazy version of Raine from Tales of Symphonia and with better hair and a better figure. Unfortunately, the rest of the party members left little to no impression. I might be able to tell you a few things about Lucille or Awin, but I won’t be hoping to see more of them in future installments. This is a real shame because the Atelier series is known for great characters. It figures that the ones that were memorable were not able to join your party.

Atelier games are also known for item creation, and this was one area that Atelier Escha and Logy: The Alchemists of Dusk Sky did properly by making just enough improvements from Ayesha: you will find recipes, put the raw materials in a cauldron and then enjoy the finished product. However, Escha and Logy would learn skills as their alchemic level increased. These were used to maximize item, armor and weapon potential for amazing results. The possibilities really were endless and it made the alchemy system new-user friendly and addictive. Escha and Logy had to create items for their assignments. While the game was on a time limit again, it was something that I never had to worry about. In other words, I never feared running out of time before finishing an assignment. However, the sooner you finish a main assignment, the sooner you can enter Free Time. Free Time opens up side-assignments. By finishing these, you earn bonuses such as more money, new recipes, stat increases and merit points. Merit points allow you to learn and research passive skills that improve how much experience you earn, the effectiveness of items and other bonuses. The item synthesis and field exploration felt similar yet different to Ayesha, and for all the right reasons.

Unfortunately, a variety of little things often times took the fun away from the game play. Aside from Atelier Rorona: The Alchemist of Arland, I never ran out of basic items when performing item creation. It happened to me more than once in Escha and Logy. I never had a problem including the traits I wanted in an item. It happened to me more than once in Escha and Logy. I never felt so restricted to explore places until Escha and Logy. And I never dreaded going into battle until Escha and Logy. While battles let you have up to six characters and are similar to Mana Khemia, they lack balance and the difficulty scaled way too quickly. I don’t mind difficult RPGs, but the Atelier series usually takes care to make the battles manageable. Even with super-powerful items, performing assist attacks and utilizing special abilities, Escha and Logy really have to craft the ultimate stuff to stand a chance against most bosses and the end-game regular enemies. The places the two would explore were full of enemies, but they also were full of raw materials that could be gathered. Finishing battles and gathering ingredients would fill up a meter which could be used to perform Field Events. Field Events were a nice touch and they helped in gathering the more obscure items.

The look and music of Escha and Logy were about the same as Ayesha. Obviously, you will not be finding any complaints from me about it. This was a gorgeous game, but the same monsters would show up over and over with different color palettes. Again, there was little variety. That said, there were some really impressive bosses. The soundtrack had a few good songs, a few not so good and plenty in between. The voice acting was top-notch, though. You could go with either Japanese or English.

The pair of alchemists are required to finish nine assignments in a span of four years. However, you will have to do it twice if you want to see it all and obtain all of the endings, items, and trophies. Another thing to note is that the final boss has two forms. The normal form is relatively straightforward, but facing the ultimate form will truly test your patience. I don’t want folks to mistake my negativity for not liking the game because, overall, I did enjoy it. Unfortunately, various things came together that made Atelier Escha and Logy: The Alchemists of Dusk Sky not as enjoyable as previous entries.