A new look at Suikoden IV and Suikoden Tactics. 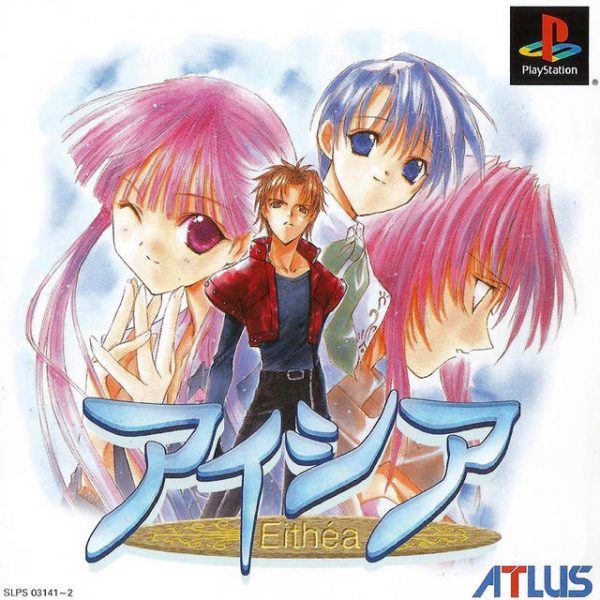 Importing games always comes with some sort of risk. Will the game play or is the console region locked? How long will it take for the game to arrive when it starts the journey across the pond? Is it possible to play the game without any Japanese knowledge? Even if you know some Japanese, will it be enough to understand the basics? All of these thoughts went through my mind when I imported Eithea, a role-playing game created by TamTam and published by Atlus. For years, Eithea had me curious after seeing its beautiful character art by Aoi Nanase and equally beautiful (albeit limited) screenshots. Eithea had the look of something that would appeal to me. The limited edition of Eithea arrived with an alarm clock, a phone card, a pendant, and an artbook all wrapped in a stunning collector’s box. With all of this glitz, was Eithea everything I hoped it would be or was it just a pretty game with no substance?

Eithea puts you in the shoes of second year Myojin High School student Shou Nimi. One day after class Shou, his close friend Yuka, and a couple classmates are chilling in the classroom as their teacher Akiho introduces them to a new student: Hikaru Ito. After the introduction, a massive earthquake causes Shou to blackout. He wakes up in a bizarre world filled greenery and a massive tree. A beautiful woman appears before him and pleads for him to save the Tree of Ere and the world of Eithea. Eventually, Shou comes to and discovers the school is in shambles. Even worse, some of his friends have gone missing. Shou joins Hikaru, Akiho and Yuka to search for them. After an attack by bizarre looking creatures, Shou realizes that they’re no longer in Japan. What is this strange new world? Can they return home?

Eithea is a story driven, one-way only RPG. Similar to the infamous first ten chapters of Final Fantasy XIII, Eithea follows a straight line narrative and has no opportunity for backtracking. Naturally, there’s a lot of dialogue. You’ll be bombarded with Japanese text as soon as you start a new game. If you’re interested in what’s going on in the story, then you’ll need an advanced skill level for reading Japanese. Personally, I was able to follow a good chunk of the story while missing out on the finer details. The good news is that the game’s linearity will prevent you from getting lost. The bad news is that the linearity often means you won’t get many chances to resupply with extra items or new gear in a town. All that said, the story isn’t anything new or exciting. The real draw is the cast. While Yuka remains obnoxious through the entire journey, Shou’s other companions are enjoyable to be around. My favorite characters are Hikaru and Akiho. Hikaru is precious as precious can be and Akiho acts the voice of reason. We need more characters like her in RPGs.

Shou’s posse is an all-female entourage. Along with the three gals mentioned above, a warrior of Eithea’s Moonlight Tribe named Rhu and a young lass named Harmy join Shou. Frequently throughout the game, they’ll stop and ask if Shou will hear them out as they talk about life back in Japan, common interests, and of course, love. By answering their questions favorably, they’ll grow closer to Shou. Your choices will affect your relationships and which ending you get. If you’re exploring a new area, then you’ll be stopped mid-exploration so one of your female companions can get your opinion on a range of topics. Extra dialogue is fun, but they provide few revelations or extra insight. They can be quite a nuisance when all you want to do is get to a save point and/or carry on with the story. If your choices didn’t have an impact on battle, then I would say they could be safely ignored.

Unfortunately, hearing out your lady friends and responding correctly is recommended. (For non-Japanese speakers, most of the time the first answer is the favorable one; you can safely button mash your way through these.) By doing so, you’ll earn more Latent Ability Voltage, or LAV. LAV is a special energy in Eithea that generates protective barriers via strong emotions. Higher LAV means higher protection in combat. LAV can be measured by a gauge in the menu screen. It’s a neat idea because it takes both your character’s feelings towards Shou and your battle formation into account. There are a variety of battle formations you can use. As your journey continues, LAV becomes more important because enemies tend to spike in difficulty unless you do some extra level grinding.

Sadly, LAV can feel like an afterthought if your enemies maneuver around your barrier. Your foes can move just outside of your character’s attack radius and/or behind your LAV barrier. The good news is that you can change formation in combat. The bad news? This costs a turn and allows your enemies to get a free round of attack. Battles are long, turn-based struggles. Every character except Yuka (the only melee fighter) attacks with a resources called TIP. Silver TIP is for basic attacks and gold TIP is for the more powerful ones. I tried to be strategic and use TIP effectively but after a while, I let the autobattle do its thing unless I needed to change forms. Bosses can take multiple turns in which they attack, move and attack again. It gets very tedious, very quickly. When a battle finally ends you’ll be awarded with additional TIP, CAN (the game’s currency) and experience points.

Eithea’s gameplay isn’t inherently bad. It’s just stale. I’d go as far to say that the game’s only redeeming quality is its presentation. With beautiful character art on full display by Aoi Nanase, a stunning 2D landscape filled immaculate details and colors, and a bevy of CGs that seamlessly weave their way into the story, Eithea is a sight to behold. Seeing those screenshots all those years ago stuck in my mind and seeing them on the television felt surreal. The music is slightly tinny, but there are some catchy tunes. Most of the game is fully voiced. Every character sounds great.

Eithea outstayed its welcome after its 25 hours. The promise of seeing a beautiful new location wasn’t enough to make up for the gameplay in and out of battle. As I was playing Eithea, I was reminded of another RPG published by Atlus: Thousand Arms. Similar to Meis’ campaign, Shou had to impress beautiful women in order to become more powerful all while tolerating boring gameplay. Eithea’s tone is more serious than Thousand Arms’ but the likeness of the two was there. And just like Thousand Arms, it’s hard to think of anyone fully enjoying Eithea. The game has its moments and looks beautiful, but it’s hard to recommend. Having no English language option available doesn’t win it any points, either. The truth is that this is one PlayStation RPG you can completely ignore.

Overall, 5/10: It’s understandable why some RPGs don’t get an English localization. Eithea’s dull battles and linearity aren’t enough to compensate for the beautiful presentation.