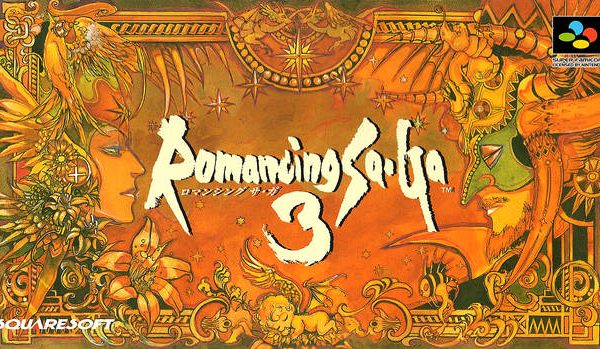 Whenever someone asks me what my favorite game is, I usually give the same response: “I have too many to list. Can I give you a top ten, instead?” However, if given the option to choose only one, I typically default to SaGa Frontier. Like SF, the entire SaGa series has a love-it or leave-it following. This is because the series takes risks. The series shuns linear progression for open-ended game play. The series has difficult battles that require you to do more than mash the “confirm” button. I recently had the amazing opportunity to finish the sixth game in the series: Romancing SaGa 3. As I write this review for you, my lovely readers, I can’t remember the last time I had so much fun with a video game.

While there is a great amount of lore and drama to set the stage for the adventure, the story takes more of a backseat to the rest of the game’s features. This is common for the SaGa series, so I knew what to expect even before popping in the cartridge. Even if that’s the case, there could have been more with the story, the heroes, the villains and the overall setting of RS3. The moment you feel as though you’re about to learn something important about something, the narrative ends and you’re back to exploring. Most story sequences only have three to four lines of dialogue. I’m confident Square could have allowed for more personality.

Issues with the story aside, RS3 is fantastic. At the start of the game, you select one of eight characters to control. Each character has a unique introduction and slightly different conversations during the game’s many quests. There is Julian, a young man with bright green hair, a bright orange jacket and bright personality. Harid is a wandering swordsman. There is princess Monica and a the prince Mikhail. My favorite is Katarina, a fierce woman who knows how to work the color lavender while wielding a giant sword. After the introductions end, the game plops you in a town and lets you explore to your heart’s content. By talking to townsfolk, you can unlock new quests that will result in treasures, new characters to recruit and/or new story events that have to do with The Destroyer. While the goal for each character is the same, getting there is entirely up to the player and it makes for satisfyingly unrestricted game play. Of course, some people never cared for this style in their RPGs. There are times you may end up wandering aimlessly unsure of your next objective. Personally, I like this style of adventuring because you can do things as you like. If a quest seems to demanding, you can simply come back to it and try again after your characters earn some growth.

As you explore towns and dungeons, you will notice that there is a lot for you to do. Along with your main character, you can recruit up to five characters. However, you can only have five in a party at a time. They can equip weapons, armor, items and accessories. Staying true to form, you can mold your characters in ways you see fit. While each one comes with pre-determined stats/builds, you can experiment with new options if you wish. Dungeons are where the most fun lies in RS3. As your characters fight intimidating looking monsters, they have the opportunity to learn new weapon skills in the middle of battle (known as “sparking”) as they use a variety of attacks. Magic can be used, but you learn more by purchasing it from teachers in towns. One of the most important features in RS3 is formation. You will unlock a variety of formations that grant various effects to the party. If you leave your main character out of the fray, your party will be in Commander Mode. Commander Mode lets your characters perform a combination attacks that yield huge damage. There is plenty of variety in the battles and after they end, characters have a chance to gain HP, WP, MP, weapon ability, and magic ability depending on how the battle played. The only thing that remains constant is LP. If a character loses all of these, then they are removed forever.

As expected, Romancing SaGa 3 is a challenging game. Since you can save anywhere, there is a chance that you might end up getting stuck in an inescapable situation. I never had that problem, but I realize that it can happen. Like I said, the SaGa series plays differently from most RPGs and requires careful planning before setting off on a quest. However, that same challenge is what makes the game so exciting. To further add to the excitement, RS3 has wonderful visuals. The 2D sprites look like they came from a Final Fantasy VI, but the rest of the visuals are as unique as the series. There are colorful spells, intense skills and a variety of monsters. There are snowy towns, underwater dungeons and towers made of crystal. The classic look is there and Square pushed the Super Famicom as hard as they could. However, the music is truly the shining star in this game. Kenji Ito, the maestro behind the series since SaGa 2, composed a variety of tracks ranging from mellow to intense.

Even though there are eight main characters to select, you can essentially see it all of the goods in Romancing SaGa 3 with one character in 30 hours. That said, the replay value for Romancing SaGa 3 is excellent due to the multiple characters to recruit and the ability to perform the various quests as you see fit. If you can’t tell, I’m a huge fan of this game and I recommend it to everyone who likes their RPGs that play a little bit differently. Sure, the narrative is lacking in content but everything else about the game makes it close to perfect.  Thanks for reading, and be sure to check out Romancing SaGa 3!

Overall, 9/10: An eclipsed entry in a series that continues to get overlooked.