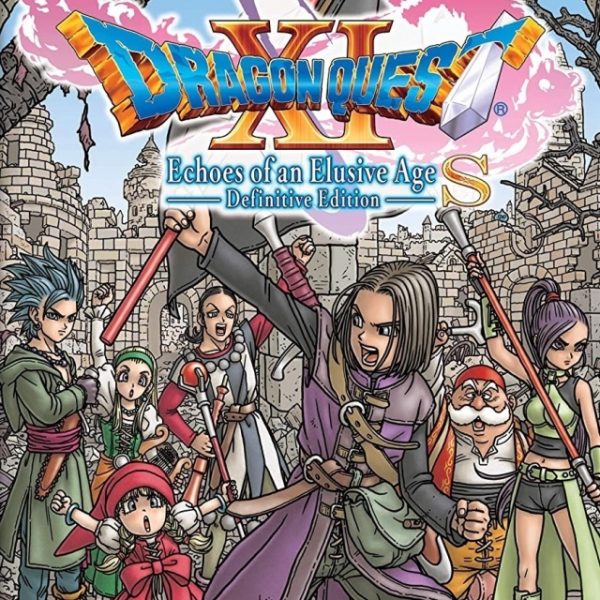 As I continue to play more games in the Dragon Quest series, I continue to see why it’s so popular. Dragon Quest doesn’t outclass other RPG series’ one way or another. I’d go as far to say it’s one of the most generic ones out there. But, for the most part, each game has a special something about it that keeps the player hooked and coming back for more. With Dragon Quest XI: Echoes of an Elusive Age, the series continues to do what it does best. Dragon Quest fans will surely eat this up. And in an interesting twist, newcomers and non-fans of Dragon Quest might enjoy this, too. Unfortunately, the series is still not fully modernized. The tedious issues that were tolerable in early installments are still present and in full force. Let’s break it down.

The game takes place in the world of Erdrea. It opens with a woman fleeing from dark pursuers while carrying her newborn son. As these things go, the woman doesn’t make it far. She entrusts the safety of her baby with a young girl who, inevitably, loses him. Luckily, the baby is found by a kindly old gentleman named Chalky. Years later, the boy has grown into a strong and beloved citizen in the small village of Cobblestone. With his friends Gemma and Sandy, he’s about to partake in a coming of youth ceremony. However, there’s more to this lad than meets the eye. A grand adventure awaits him as he fulfills his duty as the legendary Luminary.

The start of your silent hero’s quest begins like others in the series. But it doesn’t take long for things to take a dark turn. Dragon Quest XI has a surprisingly bleak start; after a couple of hours you’ll learn that being a Luminary isn’t as great as its cracked up to be. The ultimate reasons are somewhat predictable, but the way the story is told makes up for it. On his quest, the Luminary will meet a fun cast of characters that join the cause. This is one area where Dragon Quest XI excels when compared to other games in the series. While the character development isn’t super in depth, your party still feels fully fleshed out and realized. My favorite is Sylvando: a fabulously flamboyant performer that loves bringing theatrics wherever he goes. It’s worth pointing out that Party Chat returns to add more chatter.

Adventuring will feel familiar from the start. The Luminary and his friends will travel the world, stopping in different towns and dungeons along the way on their quest to rid the world of evil. Typically, you’ll wind up in a town that has some sort of problem. As the Luminary, you must take care of it before proceeding. Towns are filled to the brim with chatty NPCs (along with the campy dialogue to match) and hidden treasures. Mini Medals have made a return with great rewards to go with them. In a forgiving twist, money isn’t an issue in Dragon Quest XI. I always had enough funds to buy the latest and greatest gear for my team. To add even more fun, there’s a great item crafting mini-game you can access at nearly anytime to modify your current gear or create new pieces. Unfortunately, the series still hasn’t grasped proper item management. Your team will find a lot of restorative items, AND YOU STILL need to equip each one individually instead of having them accessible from one bag. It’s unacceptable that a game announced in 2015 makes players go through so many hoops to “equip” items.

Traipsing around towns is fun but heading outside of town and/or spelunking in a dungeon is where the real fun lies. Obviously, it’s because of the combat. Strangely, combat isn’t any more or less different than other modern RPGs with a turn-based system. There’s just something about it that makes me want to seek and destroy every enemy I come across. The hero can swing his weapon on an enemy to take off some of its initial HP. After that…it’s just a matter of inputting commands, watching the actions unfold, repeating as needed, and waiting until one side falls. That’s it. There’s nothing groundbreaking about it but combat still manages to be fun from the very first slime encounter. I never had any worry of game overs since Dragon Quest XI is on the easier side. Even most of the bosses went down without too great a struggle. There are other features like Pep Mode and team attacks, but it’s nothing gamers haven’t seen before. I think the diverse party and snappy pace is what made them so enjoyable. When combat ends, you’ll be rewarded with money, items, and experience points. Characters will get their strength and abilities upgraded as they gain levels. They’ll also be rewarded with Skill Points that can be used on each character’s Character Builder tree. This lets you upgrade stats even further, acquire additional abilities, and more. I really appreciated the Character Builder because it let me mold each character just enough to make my team diverse.

One thing that everyone will undoubtedly appreciate from the moment the game begins is the graphical polish. This game is stunning. I say this as someone who doesn’t like Akira Toriyama’s artwork. But with Dragon Quest XI, everything about his style and everything about modern console capabilities really come together for beautiful results. Every area, cut scene, and circumstance whether it’s simple or complex is just a treat to behold. And as an added bonus, those playing the definitive version can kick it old-school by activating the series’ classic 2D, sprite-based presentation. So, there’s something for everyone. Since the game is almost entirely voiced, there’s no struggling in reading forced accents. I highly recommend leaving the English setting on. Unfortunately, the music is one of the game’s low points. Like most RPGs, you’ll be hearing the same songs over and over. In Dragon Quest XI’s case, the ones you’ll hear the most (combat and the world map) run on a small loop. I often had the TV muted when I wasn’t watching the plot unfold.

One of the game’s other low points is its length. Or rather, the way it goes about increasing its length. Dragon Quest XI consists of three acts. Without giving too much away, the game reaches a conclusion and “ends” after act two. Technically, Act 3 isn’t post-game content. So, I’m confused why the credits rolled at the end of Act 2. By that point, I had racked up over 70 hours of game time. I had completed a plethora of side-content, too. The thought of doing more sounded tedious; my game ended after the credits as far as I’m concerned. But, there will be some that can’t get enough of this game and they’ll gobble the third act right up. This questionable choice aside, it’s worth nothing that Dragon Quest XI is the best game in the series. It’s not my favorite, but in terms of polish and functionality, it’s excellent. It’s also the only game I’d recommend to someone that normally doesn’t care for the series.

Overall, 8.5/10: The classic and the contemporary combine in Dragon Quest XI: Echoes of an Elusive Age. This is a solid RPG for the modern era.