Home is where the heart is, and where the dismembered arm is, and the decapitated head is.

Don’t be fooled by the revealing artwork. Record of Agarest War is a slog. 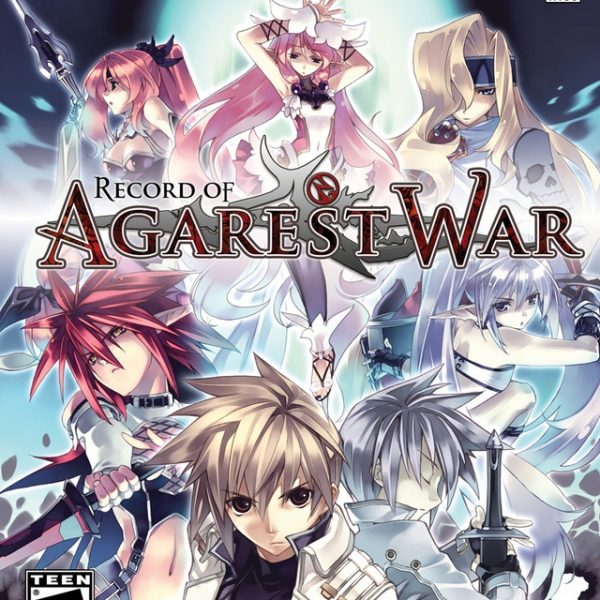 Author’s Note: This review was originally published on June 17th, 2010. Like other reviews of the time, this review features “witty” taglines to separate each section.

When someone first looks at information regarding Record of Agarest War, they probably see a game that caters to otakus, pervs, and prepubescent teens interested in anime. Actually, all three of those people sound the same. I digress. The truth is for a game so heavily marketed as a harem RPG or a dating simulation, Record of Agarest War is as tame as a movie rated PG-13. Sure, there are a few suggestive pictures, but the finished product was nothing compared to the innuendo filled Ar tonelico or the over-the-top Dead or Alive series. Despite this fact, Idea Factory and Compile Heart managed to crank out a slightly above average SRPG. Like most Idea Factory titles, there are a variety of issues with it.

Generation One is the Loneliest Number.
As the name suggests, Record of Agarest War takes place in the world of Agarest. The game begins with ex-noble Leonhardt in the middle of a battle. In order to save the life of an elven girl, he sacrifices his own and betrays his country. On the brink of death, a spirit named Dyshana says that he must give his life, and the lives of his children, to the forces of light. Leo decides to do just that and what results is a grand adventure that spans throughout the various continents of Agarest. Each generation requires you to pick one of three maidens, woo them, and produce the hero of the next generation. Based on the decisions you make your alignment of light, darkness, and neutrality will change. All of this adds up to the opportunity for different looking offspring, various pathways, and multiple endings, but acquiring the “true ending” will require careful planning. This was one of the downsides to the game because multiple endings, especially for an 80 hour game, are never a good thing. Also, most of the story snippets play out with static images of the characters in well drawn backgrounds. While the majority of the characters are enjoyable and beautifully drawn, I’m hard pressed to go through the entire game again in order to see this alleged “true ending.” Seriously, 80 hours once is long enough and for the most part, the story is pretty good. Another 80 hours? Yikes.

Walk the Dotted Line.
Like most SRPGs, there is a world map in Record of Agarest War. The world map is a long path dotted with orange orbs that represent a spot where you’re required to do battle. After the battle spot is finished, it will turn blue. This means you can pass by this location on future travels. As you plow through battle areas, you will reach an event. Once the event has concluded, you must trudge through more battle dots and work your way to another story event destination. This is the basic progression of the game and continues as such for all five generations. Towns are sprinkled in the path for good measure. Here, you can buy items, make items, create new skills, enhance your equipment, and other things. A message to Idea Factory: if you want to have an item synthesis system, take a class from Gust’s Atelier series. Creating items is fun, but obtaining the parts can be a real problem. One of the more fun things in towns that you can do is go to the Adventurer’s Guild and obtain titles. By fulfilling certain conditions, these titles you earn will grant you items and cash. Towns have stuff to do, but your time in them is minuscule. Battles are the core of this game. Get ready to spend most of your time battling the forces of evil. Battles in Record of Agarest War are fun in small doses, and often times very rewarding. However, battle after battle on the above mentioned world map will challenge anyone’s patience due to their length and abundance. It’s not that the battles are purposefully long for the sake of being long. The problem is that there are too many of them in a row and, by its nature, SRPG battles take longer than most battles to finish.

Chain of Fools.
Before entering a battle, you can equip your characters and adjust your party as you see fit. Battles begin with the Move Phase. Each character can move a certain amount of squares on a grid at the cost of one Ability Point (AP) per square. Each character has a link range, as well. By moving characters in such a way that they are within each others’ linking range, they can connect to one another and take their turns before they normally would. When the Move Phase is over, the Attack Phase begins. As displayed by the icons on the top of the screen, characters with higher agility attack first. But! Remember, if your characters are linked to one another, then even the slowest of characters can act immediately. What this means is that you can unleash a devastating chain attack on a foe with all of your characters. The more potent attacks cost more AP. There is nothing more satisfying than watching a foe’s Break Gauge and HP drain after your characters attack all at once. Be careful because enemies can link as well, which can get frustrating.

When certain skills are combined, a Combination Skill will be used. For instance, by using Power Attack, Meteor Impact, and Deadly Blow, the character (or characters involved in the attack session) will unleash Gore Crush. The most important part of the battle system are the EX Skills. As damage is gained and received, Special Points slowly accumulate. When you have enough SP and AP, you can unleash these colossal strikes. The best way to gain SP, unfortunately, is to put a tank-like character in the middle of the enemies, have him or get killed off, and revive him or her until substantial SP has been gained. This tactic is necessary for most boss battles. Bosses are way overpowered and the only way to make a dent in their HP is to use each character’s EX Skills in one chain attack. As difficult as they are, they are equally rewarding to finish.

When a battle ends, you are given a rank. Depending on your rank, you will receive bonus experience points and money. When a character levels up, you can distribute bonus points to their stats. Besides these rewards, you are granted Enhancement Points (EP) for upgrading your equipment and Technical Points (TP) which are used in the Adventurer’s Guild in exchange for new items. Battles would be a pleasure if not for their sheer abundance. However, the route on the world map can require you to go deal with five of these non-story battles before entering the next destination. They can be rewarding, but they can also become a chore.

Good Idea. Bad Idea.
A wonderful musical score shines in Record of Agarest War. If you buy the game new, you get the sound track along with the game. I recommend doing this if you decide to play the game because it has a great selection of music. The Japanese-only voice work that tells the story will appeal to some, self included, but others will probably frown on it. The rest of the presentation is mixed. Character and monster sprites are nicely detailed, and give a classic feel to the game. The art work is stunning, despite the fact that there was little variety used in character poses. Battlefields are a real drag. Not only are they dull, but they’re redundant. Unfortunately, they are also where most of your time will be spent. Luckily, the special effects with the skills and magic are exciting to watch. Some of the most over the top ones look like they belong in Guilty Gear or BlazBlue! Needless to say, Idea Factory has some good and bad ideas with the presentation. A killer soundtrack and classic graphics are good ideas. The bland battlefields and static artwork are bad ideas.

The Generation Gap.
Record of Agarest War will last you 80 hours. There is plenty of side stuff to keep you occupied which can add another 20 hours of game time. A new game plus and the thought of picking different wives may lead one to play the game again, especially if the true ending was not obtained the first time. As for me, once was enough. Another thing to point out is that there is a deluxe version you can buy. Along with the game and the soundtrack, the deluxe version comes with a mouse-pad and a pillow case. If you’re interested in what’s exactly on these, I suggest you look for yourself. Don’t let them fool you; Record of Agarest War can hardly be considered a sexually driven game. In reality, it’s an almost solid SRPG that most fans of the genre will enjoy. If not for the endless battles you have to deal with to get to the next exciting story event or story battle, the game would be a winner. I recommend this game to fans of the SRPG genre that aren’t afraid of seeing some suggestive anime babes from time to time, but more importantly, aren’t turned off by an over abundance of battles that add nothing to the otherwise well scripted story that spans across multiple generations.