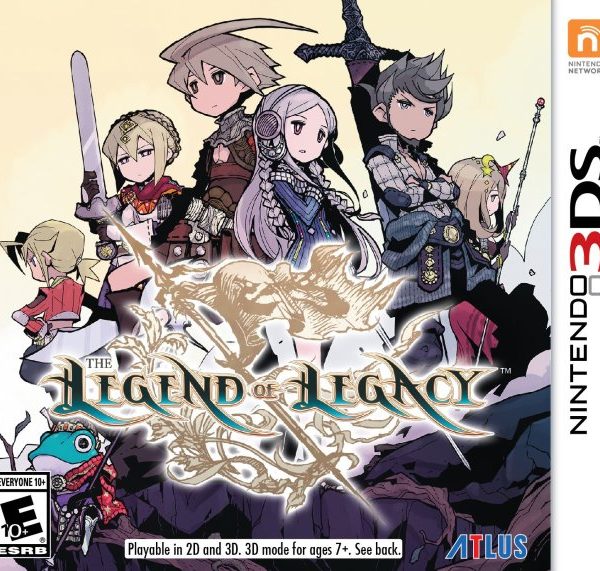 Artwork by Tomomi Kobayashi. Music by Masahi Hamazu. An open ended adventure. Characters that you can build as you see fit from the ground up. These and other key ingredients are the base that would create a modern-day title in the SaGa series. I’ve always been a fan of this series; it’s one that thrives on being different, challenging, and rewarding. I didn’t think much of the buzz surrounding The Legend of Legacy until I learned that it was very similar to the above mentioned series. When I heard that The Legend of Legacy would have the key ingredients I listed, I knew I had to give the game a chance. I’m glad I did. However, The Legend of Legacy’s heavy reliance on RNG and its unbalanced characters mean it’s not a game for everyone. In fact, fans of the SaGa series will have to make some adjustments.

The Legend of Legacy takes place on the island of Avalon. In the town of Initium, the ruler of Avalon has asked for adventurers to explore the island report their findings in hopes of making Avalon a prosperous island full of commerce, entertainment and culture. Most of the island is unexplored; the adventurers will have to steel themselves for perilous terrain and savage animals in order to chart this new territory. More importantly, they will need to discover the truth about the island and how it ended becoming wiped from the map until now. Seven special adventurers have arrived to Avalon, each with their own goal. You will select one of these adventurers, join forces with two of the others and discover the secrets of this island.

The story is solid. I like that it’s not as much as an afterthought like it has been in other games like this, but it’s not a linear narrative with a set path. The history behind Avalon does get revealed eventually and it has a few surprises in store. The downside to the story is that the characters you control never get fleshed out beyond their introductions. They exchange pleasantries and words back and forth with one another throughout the journey, but there is never any closure. And yet, they still manage to be an entertaining lot. Bianca is a young girl with amnesia and is hoping that Avalon will help her discover who she is. Eloise is an alchemist looking for the secrets of eternal life. My favorite character is Filmia, an adorable member of the Frog Clan royal family that wishes to restore his kingdom.

Most of your time in Avalon will be spent exploring new locations, returning to Initium to restock and refuel, and repeating. Initium serves as your hub and is filled with some chatty locals, a shop, a bar and a port. The port deserves special mentioning. For a fee, you can send out a trade vessel. After a certain amount of real time passes, the vessel will come back with free items and equipment. Money is tight in The Legend of Legacy, so selling the unwanted materials is a great way to get a nice nest egg. The shop’s wares change every time you come back from an adventure. The randomness can be a downside because certain supplies may not be available.

Your team of adventurers will be the first ones to explore the multiple uncharted areas in Avalon. As you explore forests, deserts, caves, ruins and more, a map will slowly get drawn to completion. Having a full map is not only helpful, but it’s profitable, too. You can sell these maps for a hefty sum if they’re drawn to completion. Alongside treasures and items to discover, the world of Avalon is littered with Singing Stones. These enigmatic constructs reveal tidbits about the past of Avalon. For finding them, you will get rewarded with a Whispering Shard. I’ll cover those in a second. Finally, nearly every area has a ruin that can be activated with special items called Singing Shards. These shards are blessed by the elements and can change the layout of the areas you explore. Heading to an area for the first time is exciting because you’re the one who is charting these lost worlds and reporting your findings to the people of Initium.

However, you’ll be re-entering many of these areas multiple times due to the game’s multiple layers of difficulty. The first issue is the scaling of the enemies. The first two areas you can explore are straightforward. When you reach the next area, things become very difficult. Your immediate thought might be to level up in order to keep up with the increase in challenge. Unfortunately, that’s not how things work in The Legend of Legacy. Like the SaGa series, individual stats have a chance to level up after battle. The problem with this system here is that it’s a process that is both random and slow. Your entire team might gain an increase in HP after a battle with a weakling. Your entire team might gain nothing after a lengthy battle with a group of five tough monsters. The RNG is strong with this game and players suffer for it.

Battles themselves move at a brisk pace. Characters can enter various stances which will impact their performance. You can unlock new stances by talking to NPCs during your adventuring. But, again, this is at the mercy of RNG. In fact, the only thing that isn’t as random as the rest of the game is learning a new skill mid-combat. This is called an Awakening, and this typically occurs when fighting a foe stronger than the team. With multiple types of weapons available, there is a multitude of skills to learn. Another neat feature is forming contracts with the elements with the Singing Shards. For instance, forming a contract with the water elements lets your team recover HP every turn. Of course, enemies can do the same thing. Battles will require you to think about your stances and your formation; you can’t button mash your way to victory. This is a challenging title, but there are times the challenge will feel unfair due to ratio of rewards to input.

The Legend of Legacy has some catchy tracks that feature Hamazu’s signature style. Unfortunately, most of the environments you explore have ambient sounds. Graphically, the game features a unique, pop-up book style of exploration with a variety of enemy designs. Sadly, the battle effects aren’t as over the top as they could be. Even sadder is that Kobayashi’s artwork is hardly shown. Instead, character portraits look the same as the chibi-styled sprites.

This is a game that can be finished in as little as 10 hours or closer to 30 hours. Depending on your luck, you might finish it closer to the 10 hour mark. Personally, my first time through took about 29 hours. The Legend of Legacy didn’t totally satiate my taste for a new SaGa, but there were times it came close. With a more lax RNG, I feel that this could have been a solid title. I recommend it only to fans of the SaGa series.

Overall, 6/10: The Legend of Legacy has some of the ingredients that make it appear as an entry in the SaGa series, but it’s heavy reliance on randomness takes away from said ingredients’ flavor.