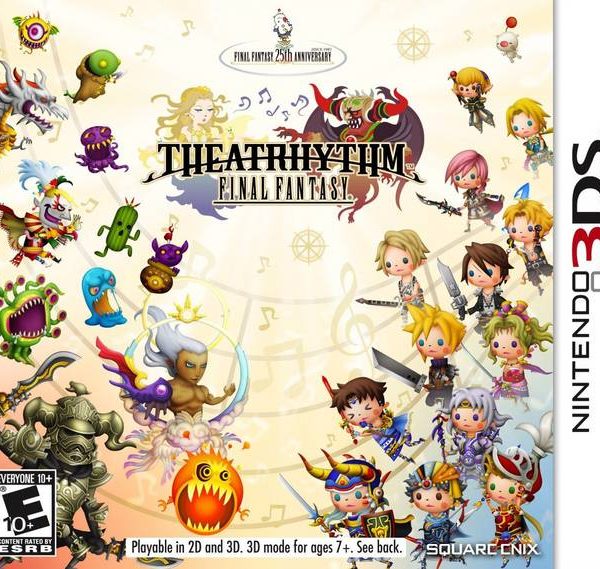 Theaterhythm Final Fantasy is annoying to type, so from this point forward I’ll simply call it TFF. Anyways, introduction section: I wanted to skip the cliches and pedantic greetings, but let’s get this out of the way: No matter what you think or say about the Final Fantasy series, there is no doubt that they’ve made their mark on the gaming world. I’ll get this out of the way, too: the music in the Final Fantasy series is quite memorable. You may not have enjoyed stopping the Emperor as Firion, but you probably enjoyed listening to the songs in the game while doing so. Voyaging through the final dungeon (that had NO SAVE POINTS) in Final Fantasy III was lame, but you probably liked the battle music. Taking control of Squall in FFVIII and dealing with his mood swings was a drag, but hearing the music was always a treat. TFF takes some of the best songs from FF to FFXIII and lets you form a party of the respective lead characters to play a fun and addictive rhythm game.

TFF has a minimal story. I think there was something about a music crystal needing power called Rhythmia. Chaos and Cosmos caused it to break or…something. I don’t know. I don’t care, either. The only thing to remember is that once you get 10,000 Rhythmia, you beat the game’s story mode. Rhythmia is acquired after each stage, which I’ll get to in a minute. Anyways, the story is tacked on for no apparent reason other than to say that there is indeed an end point. All I can say is that this is kind of like Dissidia, in that it’s just an excuse to bring heroes from across the FF realms together for another collaboration.

Alright, so the meat and proverbial potatoes of the game: timing your taps and slides to the beats and tunes of classic Final Fantasy music. When you start the game, you can form a party with the lead characters of FF through FFXIII. You want to know who I used? Of course you do: Zidane, Cecil, Bartz and Lightning. Once you have your party of four, you can equip items and skills that grant helpful bonuses like recovering HP (i.e. what keeps you from having to start the stage over if it runs out), causing more damage to enemies during battle stages and giving you more leniency in case you miss a beat. There are three types of stages in TFF: EMS’, BMS’ and FMS’. Playing each one involves precise timing with three types circles. Red circles just need to be tapped anywhere on the screen. Green circles are connected to each other. You need to hold the stylus down the moment the first one appears and let go when the second one appears. In FMS’, you’ll have to drag the stylus to hit various nodes along the line. Sometimes, the second green will have arrows. This means that you have to swipe in the direction of the arrow as you let go. Finally, yellow circles have arrows in them. You guessed it: you need to swipe in the corresponding direction. It’s basic stuff, but of course things can get very hectic very quickly depending on the level of difficulty you’re playing, and the type of stage you’re in. When you reach a certain section in the stage, the circles will turn silver. If you land these hits, you’ll get into a special section in which all of the circles turn gold. Depending on the stage, this will do various things. EMS’ are my least favorite. As you time your beats along to the music, footage of the game will play in the background. It can get distracting, especially when you reach the “extended version” which comes from landing all of the silver and gold circles. This just means you have more time to get more points before the song ends. FMS’ are the most simple. Your characters will walk in a field inspired by the corresponding FF until they reach the end. The gold circles in this stage transform you into a chocobo and allow you to gain more points quicker. Furthermore, there is a chance of finding treasure chests from moogles if your luck is high enough. Finally, the most exciting of the stages are the BMS’. Here, you’ll do battle with your four person party against a memorable creature or boss from a Final Fantasy title. You’ll be visited by one of the four fiends, Ultros, puddings, goblins, and so on. The circles fly at you fast, so get ready to time those taps and swipes. Those who have more familiarity with the music will be at an advantage, but on the hardest difficulty, even veterans will end up missing a few beats.

At the end of the stage, you get a grade, items, and experience points. As your characters level up, they perform better in case you mess up landing a beat. It’s an addictive and fun formula, but there are still some issues. The swipes aren’t as accurate as they could be, especially when they’re in a green circle. Not everyone is going to agree on the songs that were chosen for the game, either. For instance, for Final Fantasy IV, they went with the Four Fiends battle theme instead of a better one. Other songs are available as DLC, but who wants to do something lame like that? Also, the extras you can unlock aren’t worth mentioning. There are trading cards, secret characters, trophies, movies (that you can watch on youtube), songs (which you can also listen to on youtube) and other little knick knacks. Why in the world didn’t they include, you know, extra songs as the unlockable content? Money hungry scoundrels!

It should go without saying that the music is excellent, but the graphics are a different matter. They aren’t bad by any means, but they are goofy. The characters are micro-sized, but instead of typical anime features, they have button eyes, rosey cheeks and smiley lines for mouths. It’s bizarre to look at, especially when characters like Sephiroth and Lightning are swinging their swords about and smiling while doing it. That aside, it’s great being able to see certain movies from various FF titles in the background and watching the stages progress is bright, colorful and vivid. TFF is a fun game that is effortless to pick up and play, but very difficult to master. I consider myself a fair-weather fan of FF, yet I was still able to enjoy this game to the fullest. Despite the odd graphics and some technical issues, TFF is a lot of fun and recommended to any fan of Final Fantasy.