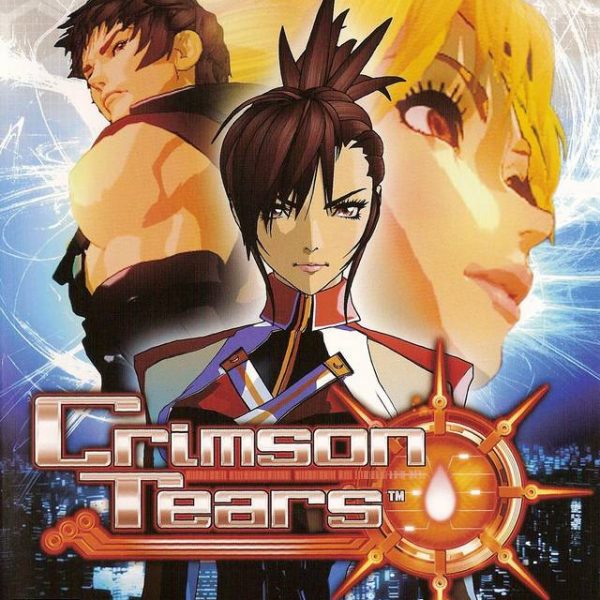 Crimson Tears is more proof of the PlayStation 2’s ability as a treasure trove of hidden goods. I’m not sure how much coverage or marketing this game received prior to its 2004 release. I’m not sure what the “professional” review sites thought of it. I’m not sure what aspect of it from a top-down perspective caused me to give it a shot. All I know is that this is another solid game in a PS2’s massive library. Fans of good, old-fashioned arcade style beat ’em ups will enjoy this the most, but Crimson Tears has something for almost everyone.

Crimson Tears takes place in the year 2049 in Tokyo. A weapon manufacturer called A.R.M.A. accidentally caused the city to turn into a distorted space through the use of their technology. Tokyo has become a collection of shape-shifting dungeons filled with bio-engineered monstrosities. A doctor at A.R.M.A. has sent three uniquely developed androids called Mutanoids to stabilize Tokyo and destroy all of the monsters causing the chaos. The first is Amber, an introspective and determined Mutanoid that questions her existence. The second is Kadie, a flaxen haired girl with insatiable curiosity and combat abilities that earn her the nickname “Mechanical Eradicator.” Finally, there is Tokio, a big-brother type of character with great arms and an unrelenting sense of justice. Amber, Kadie and Tokio make a great team, but you don’t learn much about them beyond the first few story segments and their bios in the instruction manual. We actually learn more about the supporting cast and villains. There was some real potential for the three heroes to get some development, but it was never used.

While the narrative in Crimson Tears is scarce, the game play makes up for it. Crimson Tears combines arcade beat ’em up action with the character growth and customization of an RPG. Amber, Kadie and Tokio reside in a small garage that acts as their home base. Taking control of one of the characters, you can store items, practice combos, upgrade you characters’ combos and special attacks, view monster data, re-watch movies and save the game. Outside of the garage are vendors that have medicine, guns, ammo and weapons available for purchase. The weapon vendor is also able to repair your gear or upgrade it by combining raw materials. Over time, the vendors will continue to get better wares. Donating money to the mayor will further allow them to expand their stores and get new goods. Money is a precious commodity in Crimson Tears because staying up to date with weapons, ammo, repairs and items adds up.

Dungeons are where you’ll spend most of your time in Crimson Tears. They’re also the most fun part about the game. Once again, you take control of one of the Mutanoids and go from floor to floor, fighting goons and picking up loot. As you move through the rooms, a map is drawn showing your location. Every dungeon (with the exception of the first and last) requires you to find a Key Card in order to activate a teleportation device that lets you move to the next floor. At the top of most dungeons is a boss, eagerly waiting to send you back to the home base. In the event your character falls during their exploration, you can take control of another character and attempt a rescue mission. Failing to do so means losing all of your acquired items. Even worse, the character that you didn’t rescue will be out of commission for the next trek. Similarly, losing against a boss allows you to attempt a rematch with another character. Rescue Missions and Rematches provide second chances, but they’re risky since you can’t use items during them.

Whether it’s a Rescue Mission, a Rematch, casual exploration, or a journey to uncover everything, dungeons are full of mutated and twisted enemies. Combat is where Crimson Tears shines brighter than Tokio’s handsome smile. Each Mutanoid is capable of performing combos with light and strong attacks. While button mashing is slightly effective, it’s important to get down the timing and press-order in order to keep their combo attacks going. Amber is the most balanced of the three. She can equip a variety of bladed weapons, which lets her have a slew of combos at her disposal. Amber is also capable of dual-wielding, but she can’t mix and match. Kadie is the most agile of the bunch. She can equip some of the same weapons as Amber, but she can also equip claw-type weapons and an aptly named Buster Sword. Unfortunately, Kadie can’t block. This means she can’t counterattack. Finally, we have Tokio. Tokio was the character I mained during my campaign, which was a mistake. While he can equip two firearms at once, he only has access to gloves and a few blades. Amber and Kadie have a cornucopia of combos at their disposal. Tokio, on other hand, does not. While he hits the hardest of the three, selecting Tokio as your main character is something I don’t recommend.

Each character has access to a super attack that destroys scrubs via the triangle button. Mashing the face buttons together lets your character send out an energy field that propels surrounding enemies. Such attacks are useful, but performing them and taking damage will eventually cause your character to enter Overheat status. Overheated Mutanoids move at a brisk pace and inflict more damage, but their hit points go down rapidly and their defense drops. Unless an item is used to fix it, Overheat status will end with your HP in critical status. Enemies often drop items that can be stored or immediately used to recover both their energy, their status, and/or their heat gauge. After gaining enough experience, your character will level up and recover all of their HP; a nice touch.

If dungeons start to get too harrowing, you can use a Returner to get back to the garage. Unfortunately, this means you have to restart the dungeon. Later in the game, enemies will drop Recorders which let you save in the middle of exploration. For the longer dungeons, having a good stock of Recorders is imperative. At the end of the dungeon waits a boss that will wreck your Mutanoid if you aren’t careful. While you can pause the game at any time to use an item, boss battles are not to be taken lightly.

This brings me to the game’s presentation. The enemy design is another one of the game’s high points. Crimson Tears uses a fantastic, cel-shaded style that works well for the game. During the story intermissions, the style really pops. Outside of these, their quality shows as you lay the smackdown on enemies that get treated like living dolls. Combat never grows stale not only due to the options you have, but also due to the aesthetics. The music and voice acting in Crimson Tears didn’t receive the same level of care. There isn’t much to say about it.

Crimson Tears will take about ten hours to finish, but with multiple difficulty levels and some hidden secrets, that time can be doubled. Complaints about the narrative and Tokio’s lack of options aside, I feel that Crimson Tears would have been excellent as a two-player title. Currently, we’re in an era in which PlayStation 2 titles are getting put on the PlayStation Network for download. In a perfect world, Crimson Tears would get this treatment and have an added multi-player capability. But, for now, we have a solid single player campaign that is fun while it lasts.

Overall, 7/10: Crimson Tears is yet another fun title tucked away in the PlayStation 2’s massive library.