I’d rather play Brigandine: The Legend of Forsena instead of something modern. 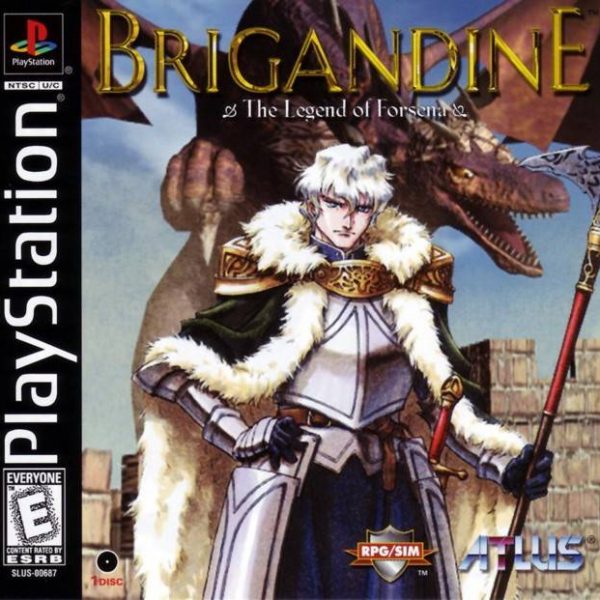 How is it possible that I’m able to play (and thoroughly enjoy) video games from years ago but cannot stomach the majority of video games on current systems? How? To be honest, I think I have my answer. Take a step back and assess the situation of the goings on in the gaming industry. Game developers don’t care about the hardcore gamers anymore. The “popular” franchises only appeal to the masses and continue to get more exposure due to oversized posters at Game Stop. Not to mention, most of them aren’t fun.

Okay, time to focus on the review. There’s a point to this. You see, I find myself constantly looking at the PSX/N64 era and playing games I didn’t get the chance to try. Recently, I finished Brigandine: Legend of Forsena for the Playstation. This SRPG was released in 1998, a time when the Playstation was starting to become the holy grail for RPG players. Brigandine’s graphics are average, the game can take as little as ten hours to finish initially and the story plays out only through conversation boxes and anime still portraits. However, Brigandine offers more depth, strategy and fun than titles on current consoles. Game developers of today: wake the heck up and learn from the elders. Brigandine is not perfect, but it’s certainly better than most of the crap out there right now.

Brigandine takes place on the continent of Forsena. Guided by the power Mana, warriors known as Rune Knights are able to invoke monsters and magic to battle the forces of evil. Or each other. The story begins with the Emperor Zemeckis overthrowing the ruler of the Kingdom of Almekia in a coup d’etat. Now, Zemeckis is hell-bent on conquering all of Forsena for his new empire of Esgares. Players get the chance to pick one of five rulers and attempt to thwart Zemeckis’ ambitions and conquer the entire continent themselves. This is the only time in which war has ever been fun.

Depending on who you pick at the start of the game, you’ll follow a different story with different characters while you slowly but surely take over Forsena. Prince Lance of New Almekia wants to restore his royal name to it’s former glory. Queen Lyonesse of Leonia, a religious country that only wishes to have peace, wants to ensure none of her subjects get harmed during Zemeckis’ campaign. The Caerleon Kingdom is ruled by my personal favorite, King Cai. He’s a powerful magician and the wisest of anyone on the continent. In the north, there’s King Vaynard of the Norgard Kingdom. Despite having low resources, Vaynard is a brilliant warrior and tactician. Finally, Emperor Dryst of Iscalio is a scoundrel of a ruler who’s tyrannical methods of monarchy disgust his people. A powerful warrior, he wants to conquer Forsena just to pass the time. Each general has advantages and disadvantages and follows an entirely different narrative. No matter who you pick, the goal is the same. It’s the way you go about achieving this goal that makes each playthrough different from the next.

Once you pick a general and watch the introduction finish, you are taken the map of Forsena. As you move the cursor around the map, you’ll see all of the castles in the various countries. This is where the fun begins, but also where most of the confusion begins. Brigandine has two phases: organization and attack. Organization phase acts as the precursor to the attack phase. Organization means more than just sorting your troops, although that’s important. This is the time to summon monsters using Mana, organize your battle parties, send characters on quests, equip and use items and move your troops to another castle under your leadership. Building the perfect country requires balance. Often times, rookies will put all of their powerhouse characters in one castle. Doing that is a mistake because it leaves no one left to defend the other castles. You also have to take into account your location. Which of your castles in danger of being attacked by neighboring countries? This is the phase to plan accordingly…

…because the attack phase is when the battling takes place. There are two types of battles, offensive and defensive. While they play out the same way, the results will be different. Offensive battles give you a chance to take over an enemy castle. If you fail, then your troops retreat to their home base. Losing a defensive battle means that the enemy will take over your castle and your troops must go back to the home base. As your astute mind has probably figured out, winning a defensive battle means that your castle is safe and the enemy has to retreat and regroup. Alongside the customization of troops, soldiers and monsters, the battles in Brigandine are one of the highlights of the game. The view of the battlefield is similar to most SRPGs, but instead of four by four square tiles, characters are placed on hexagons. This gives the opportunity for more attacks from the sides and back.

Depending on who has the highest level, the members of that squad will go first. The Rune Knights have a special ability that grants their monsters more power. A range is displayed that covers a certain area. It’s important to keep that range in mind when moving your monsters, otherwise their powers will be reduced significantly. Also, if a Rune Knight falls in battle, all of their monsters retreat or have a chance to get captured by the enemy. This is why you have to plan your formations, tactics and usage of MP accordingly. There are no items or ways to restore MP in Brigandine. If the battle lasts longer than 13 turns, the attacking side wins.

As characters and monsters level up, they acquire new magic and abilities. Monsters can evolve into new and more powerful forms upon reaching a certain level. Your Rune Knights can change classes when a certain amount of levels are gained or certain conditions are met. There’s no other way to describe all of the fun stuff in battles other than capital F-U-N. One issue with the battles is that when you execute a command, the 2D sprite view changes to a 3D one-on-one battle showing the command in execution. The character models look fine, but these slow down the battles immensely. SRPGs are slow by nature, so adding this was mistake. Luckily, they can be turned off so you can enjoy the exciting battles to their fullest.

Brigandine looks and sounds great. Unfortunately, you don’t get to hear enough or see enough of it. The character sprites look detailed, but they lack expression. When you see the 3D models, they look realistically proportioned and show off more life. The battle maps are nothing to look at, but their massiveness works for full-scale wars. The character portraits have a great anime style but it’s a shame that they only have a few portraits that represent the moods. The biggest downside is that there’s too much telling, but not enough doing. You’ll read about the massive duel between two warriors, but you should be actually seeing it. Brigandine’s music is excellent, some of the best compositions on the Playstation. Again, there’s just not enough of it. What you will hear, though, is enough to warrant the OST being purchased.

Brigandine: The Legend of Forsena will probably take ten hours the first time, depending on who you pick and the difficulty level. The ability to replay the game again and again as different generals gives completely different stories and the majority of them are worth watching. Playing Brigandine will give you a sense of accomplishment. You are slowly but surely defending a country from an evil empire while taking over the country for yourself. I’m excited to try a new general in my next campaign. There is a bit of a learning curve; you might be overwhelmed with all of the options available to you from the get-go. My advice is to stick with it, figure out how to organize your castles, don’t waste Mana on overpowered monsters and experiment with different tactics. The fact that you get to do all of this, and then some should indicate the quality Brigandine offers. As I look at the games of today, I can’t find any that offer the level of customization like Brigandine. Sure, they may look better or tell a story in a better fashion. But, are they fun to play? Usually, no. Brigandine: Legend of Forsena is an excellent title that gives fans of war, strategy and tactics unprecedented options. If only more games of the current generation followed suit.