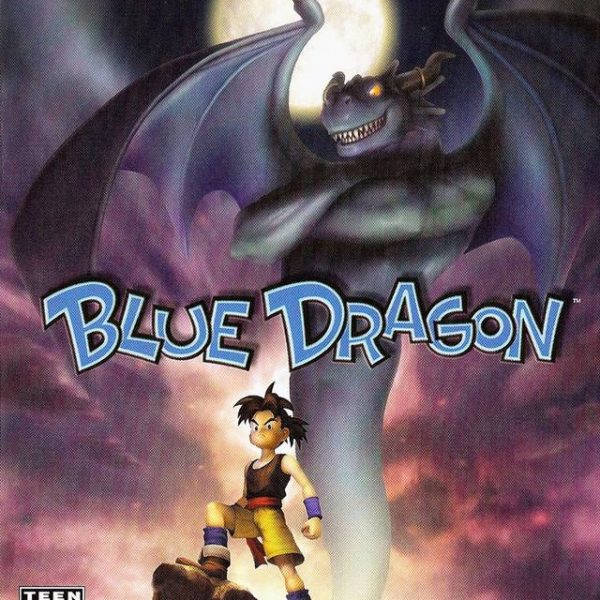 Similar to games like The Last Remnant and Lost Odyssey, Blue Dragon is another Xbox 360 game that I missed during its heyday. Unlike the above mentioned games, Blue Dragon didn’t sneak under my radar. In fact, it was hard to miss. The Toriyama presentation and bright colors made it pop among other RPGs at the time. It’s a game that I’m glad that I waited to play. Blue Dragon has a classic structure with some modern touches for its generation, but its “kiddy” presentation trickles into the story and causes the game to outstay its welcome.

My distaste for Akira Toriyama’s art style was the biggest factor that made me wait so long to play it. Yes, I’ve played Chrono Trigger multiple times. The difference there was that Toriyama’s style wasn’t as prominent as in Blue Dragon. The game is presented in 3D with Toriyama’s signature style. Characters look goofy as heck. Monsters are in the same boat. On the plus side, spell effects are stylish and the environments your party explores are lush and colorful. No matter how you feel about the visuals, chances are you’ll enjoy the music. Nobuo Uematsu crafted a splendid selection of songs for Blue Dragon. Perhaps the most surprising and bizarre aspect of the soundtrack is the boss theme, “Eternity.” The track is sung by the lead singer of Deep Purple. Personally, I thought the track was stupid. But, it’s a strong choice and I respect strong choices.

Blue Dragon takes place in a fantasy world that mixes magic and machinery. For the last century, purple clouds would randomly appear in the sky. If the clouds appeared, disaster wasn’t too far behind. The village of Talta is no exception. Three Talta youth decide enough is enough. Shu and his best friends Kluke and Jiro attempt to counter the purple cloud’s disaster. Their plans fail, but all is not lost. The three friends end up swallowing glowing spheres that grant them the power to use magic. Their magic comes in the form of turning their shadows into powerful beasts. They don’t know the origins behind this magic, but if it means stopping the purple clouds and the evil Nene behind them, then they’re all in. It’s a classic good versus evil story that uses comic mischief and silliness to get the point across. Serious moments are few and far between.

I didn’t mind the story. The objectives were always clear. New information about the overall narrative revealed itself at a nice pace. The problem were the characters. Shu is everything I can’t stand in a leading character fully realized. His optimism pours over to obnoxiousness. Thankfully, he comes into his own much later in the game as the party’s leader. Until that point, Jiro and Kluke help balance his behavior. Another character, Zolla, is an intriguing ex-mercenary that brings some maturity to the party. But, everyone’s screen time (including NPCs, villains, etc.) gets overshadowed by someone that joins a few hours into the game: Marumaro. I don’t use this word often, but I “hate” this character. His antics. His voice. His mannerisms. His personality. His design. It got so bad when he opened his mouth that I’d either skip a cut scene entirely, or mute the television. I played the game with English dialogue, but I’ve been told the Japanese option isn’t any better.

Luckily, Marumaro keeps his mouth shut during battle. Battles are triggered by running into enemies on the field. A neat feature of Blue Dragon is that you can link battles for extra rewards, stun enemies with certain abilities, and even instantly kill enemy parties with a barrier. Battles use a classic turn-based blueprint that has some nifty bells and whistles to keep things fresh. The turn order is displayed at the top of the screen. Executing actions causes a wait time. Simple attacks and using items doesn’t do much, but magic or special skills can put you further in the queue during the next bout. Furthermore, some attacks have a charge meter. More charge means more power and targets, but also longer wait times. Each character can be assigned a class such as white mage, monk, and assassin. Similar to Final Fantasy V, characters can equip abilities from other jobs once they’re learned. All of this comes together for players to make a five person party molded to their liking.

There’s potential for variety in Blue Dragon’s combat. At first, battles make you carefully utilize your resources. As your team grows in experience and skill, battles become trivial. With the right set up, regular battles are over in seconds. The game drowns you in rewards, too. So, when it comes time to shop for new equipment and items, you’re never going to be out of money. Blue Dragon is an easy game. Even secret bosses provide little challenge. This isn’t a bad thing, but those looking for a challenge will want to look elsewhere.

Blue Dragon has a lengthy campaign that can last up to 60 hours. Exploring every nook and cranny (seriously, you can uncover stuff from exploring literally EVERYTHING) and discovering all of the secret areas can add even more time. I was ready for the game to be over by the time I reached the final dungeon. The campaign is super linear so there’s little reason to replay it unless you wish to relive the story. Blue Dragon is another RPG that does what other games in the genre do. It’s childlike visuals and a solid job system help differentiate it. Those that like classic RPGs will find something to keep them going until the end.

Overall, 7/10: Blue Dragon’s silly outer layers (and cringe worthy cast) are deceptively hide some of its better features. RPG fans will enjoy it, but those that abstain won’t miss much.