Azure Dreams could have been named The Legend of Puffy Lips.

Arc the Lad III is the thrilling conclusion to the adventures started by Arc and Elc. 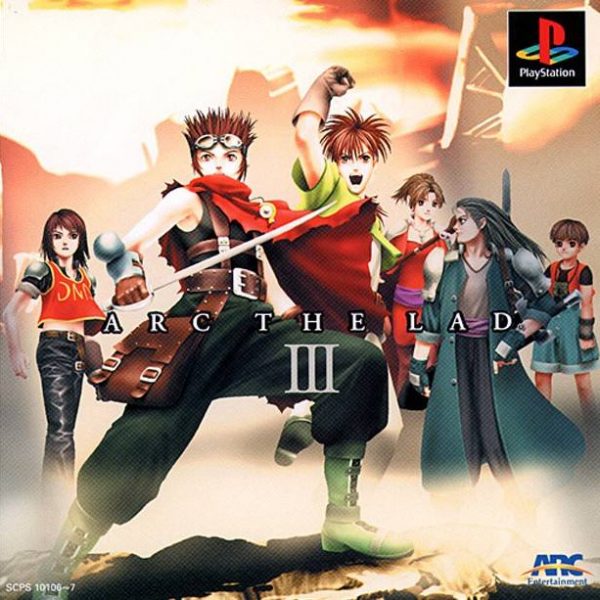 The saying, “All good things must come to an end” could never ring more true than in the case of the Arc the Lad Collection. Arc the Lad III is the conclusion to the story that was told throughout the first two games in the series. Now, I know that some of you reading this (actually, does anybody read these things I write? I mean, I’m not getting paid here. The least you can do is click them so I get a hit or something. Or you can recommend them. No, I’m not being greedy) are probably a bit skeptical about playing Arc the Lad III after the massive volume of Arc the Lad II. That’s understandable, so I’ll tell you now that Arc the Lad III is much more forgiving and much less time consuming. While I enjoyed Arc the Lad II the most out of any of the games in the series, the third installment is still a good game in it’s own right.

After the disheartening ending in Arc the Lad II, it’s nice to see things pick up with a bit more joy in Arc the Lad III. Following the events of the Great Disaster (aka the giant, black shape crashing on the ground and causing a catastrophe) the folks around the world have banded together to slowly rebuild. In the tiny village of Sasha, we meet our orphan hero, Alec. Alec’s life in Sasha is comfortable, which is a nice change considering he was nearly killed in the Great Disaster. Along with his obnoxious BFF Lutz, Alec tends to chores and practices swordplay within the town limits. All of that changes the day he decides to become a Hunter and see the world. Alec and Lutz will be joined by familiar faces and some new friends as they voyage around the world and slowly uncover a plot that threatens the existence of humanity. Alec’s tales is a bit more easy-going than Arc’s, and much more laid back than Elc’s, so it’s a nice change of pace based on what fans of the series have already seen. Also, fans of the series will be happy to see the return of characters like Tosh, Shu, Chongara, Lieza and a few others that play an integral role in the development of the story. There is only one downside to the characters: Lutz. I cannot stand this dude. Gun-slinging, tough-as-nails Cherly and chipper, starry-eyed Theo are hard to enjoy when Lutz is alway running his mouth and trying to steal the show. Alec has serious issues when it comes to picking a best friend. That moron aside, the cast and crew in Arc the Lad III is great.

Lutz is with you from the start of the game, which is a bit slow. It’s not until the second half of the first disc you get to see some solid action and plot thickening. However, the formula for the quest is the same throughout the entirety. As a Hunter, Alec needs to go to the Guild to take on various jobs. Once enough jobs are complete, a job relating to the story will pop up and need finishing. When jobs get complete, Alec and his crew move to another country and continue with their quest. While it’s not required you finish all jobs, it’s recommended because some offer good rewards and make it so later jobs pop up. It’s a classic, tried-and-true system that worked will in Arc the Lad II. Thus, it works fine here. Thanks to Working Designs, character and story development are spot on. Everyone, and I do mean -EVERYONE- in Arc the Lad III has plenty to say. Whether it’s a simple fetch quest or something that spans across the world, dialogue and conversation will be going on. It can get annoying, especially when all you want to do is fight some monsters. Since half of the jobs have no role in the main story, you can get by with just mashing the X button.

Mashing the X button is something you’ll end up doing in battle, too. Well, scratch that. For most of the fights, you can get away with a couple of attacks of maybe a spell that covers a huge area, but other fights will require a bit more thought. This is especially true in the beginning. As is typical with Arc the Lad, you control a team of up to four characters and move them in a fast-paced styled SRPG. Alec can equip a variety of weapons, and each character learns a set of special attacks. Some weapons can attack multiple foes at once, you can use items to attack and recover, and everything else you can think of that’s been done before. There hasn’t been much added since Arc the Lad II, but the new features are worth mentioning. As you advance the story, you’ll be able to make your own weapons, armor and items. Theo can capture monster essences in cards and then unleash them in battle for some pretty impressive attacks that give the summon spells in Final Fantasy a run for their money. While it’s nothing new in terms of originality, battles are still as fun as ever.

Taking a leap of faith in technology, Arc the Lad III is the first adventure in the series to have 3D environments and movies with CG characters. With sprites looking like they stepped out of Wild Arms 2 and unique environments that have a solid mixture of color and texture, Arc the Lad III is the best looking game in the collection. One of the things that helps the game’s look is that the creators retained some of the style choices that made the previous Arcs look nice. For instance, all characters have wind blowing in their area as they wait to do battle, and the monster still perish in unique ways. There is plenty of new stuff to look at, though. Alec and his buddies get a variety of snazzy spells and get to travel through some towns that are unique to the game. New monster designs make their debut, and bosses are just as massive and intimidating as before. Following the trend of the first two games, Arc the Lad III has a solid musical score and battles that feature Japanese voice acting.

Alec’s quest to save the world again will take about 40 hours. There are some Hunter jobs that could take long enough to add on to that time, and completionists might want to obtain all of the items and weapons through synthesis. Doing these things will add another five hours. Fans who have come this far should see the end of the saga and check out what events follow the Great Disaster. Of all three Arc the Lad titles in the collection, Arc the Lad II is still my favorite. However, the only one that I’d be likely to replay a second time is Arc the Lad III. It’s just the right length, has a great cast, and has a solid adventure. Not to mention, the final boss doesn’t have an insane amount of power and doesn’t take an hour to kill. Thus, Arc the Lad III wins the award for being the most likely to get replayed. However, in the end, all of the games come together to make a grand adventure that ends with the events of Arc the Lad III. Check it out so you can finally keep the world safe once and for all.