Code of Princess. An awesome game with a silly name. 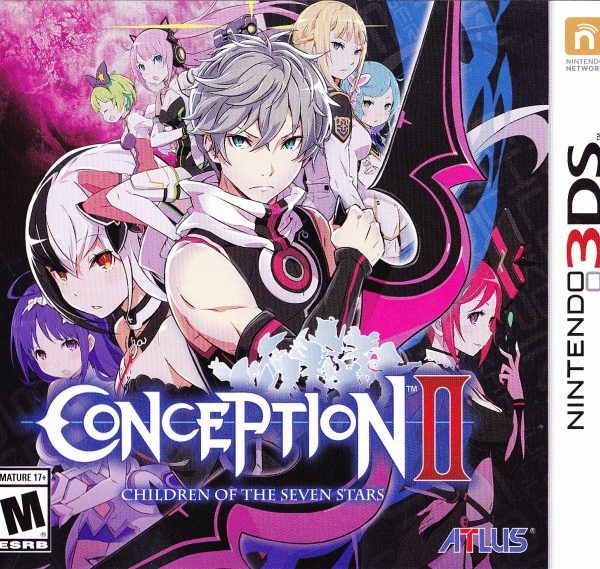 Conception II: Children of the Seven Stars is another RPG in the 3DS and Vita library that follows a classic dungeon-crawling format. While this style of RPG is relatively ubiquitous, the feature that separates Conception II from its peers is that it has elements of a dating simulator. This combination is fun at first, but the further you get into the game’s minimalistic story, the more you start to realize that the level of monotony has no end in sight. The repetition in Conception II gets punctuated at times, but these moments are fleeting and send you back to the same boredom just as things start becoming interesting again. Conception II could have been something unique, but it’s a snooze fest that only those starved for an RPG should check out. Given how vast both systems’ libraries are, you are likely to have better options.

When you first begin Conception II, you are treated to an animated opening movie. These animated clips are thrown in throughout the game. I love it when RPGs do this, but I find the art style in Conception II basic. In fact, most of the presentation in Conception II is basic for a game on a modern, portable console. The music didn’t fare much better, despite having a great cast to provide the voice acting. This is a minor (and personal) nitpick, since graphics and music aren’t deal breakers for enjoying a game. But, it is something worth noting.

Conception II’s story begins with a high school student named Wake Archus. After a tragedy shook his world, Wake learns that he has a powerful ability to destroy enemies created by mysterious phenomena known as Dusk Circles. He enrolls in a school in Fort City to nurture and enhance his fighting powers, only to find that he also has the ability to produce entities known as Star Children. Now known throughout the entire school as God’s Gift, Wake needs to get to the bottom of the Dusk Circle problem with the help of some elite, female classmates. That’s the majority of the story, which is unfortunate because the introduction sequences do a good job of building the world Wake and his friends explore. It leads you to believe that there will be more mysteries to uncover as you go from chapter to chapter. One thing that is worth noting is that the game has great writing. Wake has a fair amount of things to say, mostly through the choices you select. Other characters have their own unique quirks, many of which you’ve seen in RPGs and anime before. Your mileage will vary with the “tsundere” and “yandere” types, but characters like Fuuko and Chloe are breaths of fresh air due to their relatable personalities. Since this game takes a lot of cues from a dating simulator, Wake’s remarks will alter how a girl feels about him. Wake isn’t a lecherous pervert, so the choices you make and the gifts you can give are tame. It’s not always obvious which choice is the right one, but there is no need to worry about a girl disliking you.

After the prologue, it’s clear that Wake’s school life will be busy with building relationships and battling in dungeons. While in Fort City, Wake can shop, take on side-quests, and interact with the game’s multiple heroines. Doing this last activity is crucial because it helps you form bonds. Higher bonds yield better rewards, as well as help determine which of the game’s many endings you will get. The most important activity you’ll be doing while in town is known as “classmating.” Since Wake is God’s Gift, he has the ability to create Star Children by sending his energy to a female classmate. Despite all of its innuendos, classmating involves Wake holding hands with a female student, and then having her unleash her essence into a Russian doll. It’s as bizarre as it sounds. The odd thing about classmating is that Wake’s partner will undulate and have a look of pleasure on her face as the ritual continues. But, the only thing they’re doing is holding hands. Luckily, all of the cut scenes involved with classmating can be skipped. The result of your classmating will make Star Child that can have a class of your choosing. There are knights, archers, sorcerers, healers, thieves and other classes that can join Wake and his female companions. Star Children can be grouped into squads of three. Ultimately, you will have nine characters on the battlefield that operate as three squads.

Unfortunately, battles are not exciting despite the variety of Star Children and classmates. Dungeons are bland, despite having randomly generated floors. During combat, you can move your characters around enemies to deal more damage or fight them head-on to reap better rewards. By landing hits at an enemy’s front, you can build a chain meter and potentially slow down your enemy. However, battles are usually over quickly, which means most of the features that get unlocked the further you get don’t get much use outside of the occasional boss battle. The amount of monsters is severely lacking, too. Battles offer some excitement at first when you unlock new Star Children classes and group them in unique ways. With so many combinations to choose from, it makes finding your perfect party easy. Star Children can only gain so many levels before they get maxed. Once they reach their maximum level, you can send them to Fort City to help improve the shops, buildings, or the side-quests you can take.

Wake’s journey can take up to 40 hours to finish. Honestly, Conception II: Children of the Seven Stars isn’t bad. It’s just dull; despite some moments of cleverness, the use of innuendo, and the ability to create squads of Star Children of various classes. The majority of your time in Conception II will be in dungeons, which are terribly bland and feature the same monster design over and over again. With multiple endings and some extra content, those that do enjoy Conception II will have reason to go back for more. Everyone else will either stop their procreating while they’re in the middle of the game or abstain for good once it comes to its conclusion.

Overall, 5/10: Conception II: Children of the Seven Stars has a variety of features that try to separate it from other dungeon crawling RPGs. Regrettably, they don’t do much to mitigate the boredom.