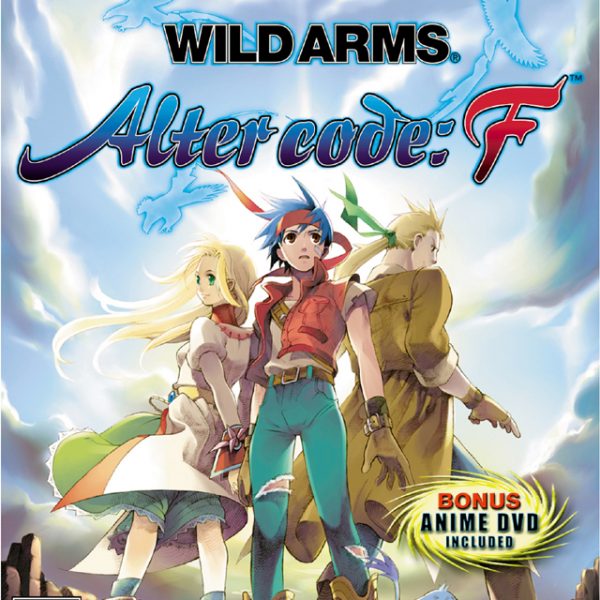 Author’s Note: This review was originally published on January 3rd, 2011. It uses “witty” taglines to separate each section. I think I was starting to get sick of taglines by the time I wrote this review.

A remake of the title that started it all, Wild Arms Alter Code: F is the wild-west inpsired original with a new look, a new script and new style. My experience with the first Wild Arms was minimal, but from what I remember, the game featured adorable 2D sprites, 3D battle effects, and a story line that spanned at least 60 hours. Wild Arms Alter Code: F allowed me to see where the saga begins while still remaining current in terms of game play and style. It’s the perfect game for those who wish to revisit their old friends, for those who wish to see the origins of the franchise, or for those who are long-time fans of the series. Unfortunately, anyone outside of those groups will probably be turned off due to the issues of the game.

Alter Code: Presentation.
The most notable feature for Alter Code: F is the presentation. The 2D sprites and buildings were wiped away for fully rendered 3D models with realistic proportions and body language. Dungeons and towns have more detail, but less color. Luckily, battles are similar in execution to Wild Arms 3 as characters and monsters are constantly running around the battlefield. But, as a fan of 2D sprites, I felt that the change wasn’t anything special. The graphics still look a bit dated, too. The new look was supposed to the game’s major selling point. How come they decided to not give more detail to the graphics and push the PS2’s capabilites? Still, the game does have a more modern look than the days of early Playstation games. Another change, which was also an upset, was the art direction. The character art from the original Wild Arms was wonderful, so I’m confused as to why they swapped artists. Along with the graphics, the music got an upgrade. The music is still as excellent as ever. Best of all, the opening whistling song remained unchanged and will make any fan of the original ecstatic to hear it all over again.

Alter Code: Quest.
In the dying world of Filgaia, people far and wide are trying to get by. The planet’s downfall began during a past war with the human races on one side and demons from another dimension on the other side. Powerful elemental spirits known as Guardians lent their strength to the battle, but their powers were lost in the war, as well. Now, three adventureres are going to join by circumstance and fight for the survival of Filgaia. The first is Rudy Roughknight, a kind, quiet young man who can wield the mysterious power of ARMs. ARMs are guns that are typically associated with the demons. Rudy has no idea of his past, but continues to travel Filgaia with a smile on his face. The second character is Cecilia Lynne Aldehyde, the princess of the kingdom of Aldehyde. Armed with powerful magic, the ability to talk to Guardians, and a mysterious family heirloom called the Teardrop, she will do anything for her kingdom and her world. The last is Jack Van Burace, a mysterious swordsman who wanders the world for treasures with his trusty side-kick critter, Hanpan.

The game begins with Rudy’s introductory sequence, followed by Jack’s, and then with Cecilia’s. They finally meet and unite to fight the demons. From what I remember, the story remains unchanged. However, the script got a make over. While certain story events were better explained, the script was also full of spelling, grammar, and syntax issues. While these were easily overlooked, the biggest problem with the new script was the language. Conversations didn’t sound natural in the slightest. The awkward, often-times out-of-place words coming from the characters were nothing like what happened in the Playstation original. While the story was left unchanged, the way it progressed was not. Unfortunately, it wasn’t the best change and was in need of editing.

Alter Code: Battle.
Rudy, Cecilia, and Jack will travel all over Filgaia on foot, by ship, on the back of a giant golem, and by plane. Most of the time, traveling from one point to another will involve battles. The handy Migrant Level is back, which is an absolute blessing. As the team wanders the world, an exclamation point will appear over your character’s head. If you’ve got units in your Migrant meter, you can hit the circle button and drain a unit from the meter and avoid the fight. Now, if your Migrant Level is high enough, the meter won’t drain and you can continue to avoid fights. The level increases with the help of special items called Migrant Seals. Not hitting the circle button fast enough means you will engage in a battle. The new battle system is the biggest improvement for the new version. At the start of a battle, you can select your character’s actions, and then watch the battle play out. The typical selections are available: attack, defend, etc. As damage is given and received, characters build up Force Points. FP allows characters to use specialty skills. Each character has their own. Rudy can acquire new types of bullets and unleash devestating attacks with them. Using an item called an Alter Part, he can upgrade the number of uses for these. As an ARMs user, Rudy’s gun can also be tweaked to your liking to improve his effectiveness in battle. Cecilia has access to a wide variety of spells through the use of Crest Graphs. Crest Graphs combine two elements and produce a spell, which you can name. There are 32 spells in all, but you can get by with only a handful of them. With her ability to communicate with Guardians, she can use them in battle when she has enough Force Points. Finally, Jack learns sword skills as the quest continues. The more they get used, the better they get. He also has the Fast Draw skill, which allows him to act first on that turn.

Battles are similar to the system used in Wild Arms 3. There are no weapons, armor, or accessories. You can increase your characters attributes equipping Personal Skills. These can easily turn the tide of battle. However, much like Wild Arms 3, luck plays a critical role in battles. More times than I liked, I’d get caught from behind or have to deal with a solo battle. I absolutely hated the luck attribute of Wild Arms 3 and they kept it the exact same as for Wild Arms Alter Code: F. That being said, however, the battles were usually quick, and often times, exciting. Boss battles were especially challenging. However, with the proper tinkering of Rudy’s ARM and Cecilia’s magic, they were easy to handle. Overall, battles were fun. The Migrant Level was usually high enough for you to battle when desired. Of course, that pesky luck stat could change that. In the event a battle is lost, you can use a Gimel Coin to try again.

Alter Code: Additions.
There isn’t much else to describe Wild Arms Alter Code: F. Town exploration was kept similar to most RPGs in that you can talk to NPCs, uncover side-quests, and shop for items. Dungeon exploration remained true to the franchise; each character has their own unique tools that they can use to solve the multiple puzzles thrown at the team. The last thing worth mentioning as far as new content is the new roster. While Rudy, Cecilia and Jack are the three you control the majority of the game, you can add three more characters to the team. First, you can recruit Dr. Emma. The next character you can recruit is Jane Maxwell. The third character? Well, I’ll let you see who that is for yourself. Either way, this was a good move in case you disliked one of the original three. For example, I could not stand using Jack. Thus, kicking him out for Jane was a great bonus.

Alter Code: Conclusion.
Wild Arms Alter Code: F will last you between 40 and 60 hours, depending on how much extra stuff you wish to pursue. In the end, I’m glad I played it because it gave me a chance to see the beginning and end of Filgaia’s first fable on a more modern system. However, it’s hard for me to recommend the game because of some it’s flaws, as well as some of it’s changes. The luck based battle system, the rather plain graphics, and the silly writing could be enough to turn casual RPG players away. It could also be enough to turn die-hard fans of the original away, too. For those who wish to relive a classic or for those who are huge RPG fans and are unsure of where to begin the Wild Arms franchise, this game is for you. Everyone else will probably wish to play something else considering the vast amount of solid RPG titles available on the Playstation 2. Wild Arms Alter Code: F was a fun game, but only a select few will find the fun.