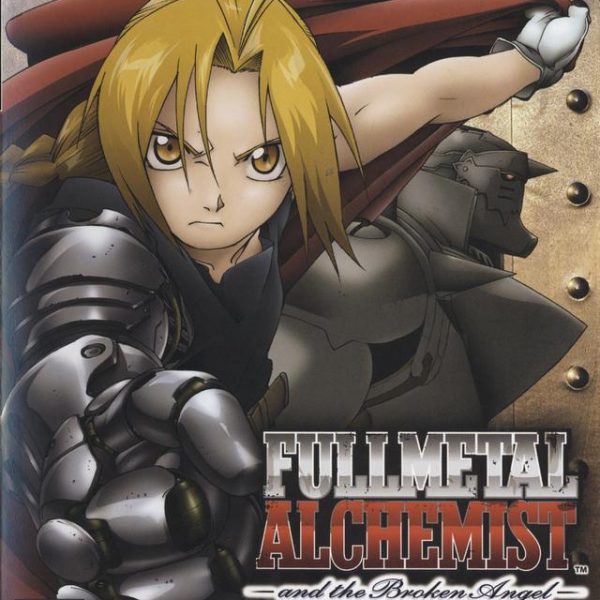 Author’s Note: This review was originally published on February 10th, 2005. This was the very first review I wrote that won me Review of the Month.

I received Full Metal Alchemist as a gift. I like gifts. ^_^ I have read stuff about it saying that it was just an average game; just something to pass the time. Well, I mainly have to agree. It’s a fun game, but it’s nothing worth holding onto or hunting down. It’s definitely rental material. So! Time to review. Full Metal Alchemist is based off an anime of the same name, something I never watched.

Story: 7/10
Edward and Alphonse Elric are two brothers who have been practicing alchemy for many years. Edward, a child prodigy in the alchemy field, decided to try to use alchemy to revive their mother. The results were quite tragic. Edward lost his right arm and Alphonse lost his whole body. Using his left leg as a catalyst, Edward sent Alphonse’s soul into a suit of armor. It looks like they still have a lot to learn. In order to restore all that is right with their bodies and their mother, Al and Ed decided to head to Central in order to hunt down information regarding the powerful Philosopher’s Stone. With this artifact, they’d be able to maybe bring their mother back to life as well as restore their bodies. The two brothers hop a train to Central, but it gets hijacked by a group of alchemists. Little do Ed and Al know that these alchemists have a sinister purpose for hijacking this train. It looks like the Elric brothers are going to have a lot of trouble getting to Central in one piece.

The story is what you’d expect in an anime. It starts off with a lot of questions arising that all end up getting answered near the end. In the middle of the game’s story, you’ll slowly piece things together. That being said, it’s nothing thought-provoking or intriguing, but I still enjoyed it. It was predictable at times, which I didn’t like, but it still was an overall interesting story. Unfortunately, the game is short. Therefore, the story is short. For me, as well as others, that may not be such a good thing because you might want more bang for your buck. Then again, I got the game as a gift so I can’t complain.

The characters, as far as I can tell, were taken straight from the anime. They all have quirky anime lines and actions, many of which come to life during the cut scenes. The character’s conversations with each other are rather humorous at times (Ed has some great lines) and their mood’s are displayed by the large portraits drawn of them (like in the LUNAR games, only bigger). I’ve always liked it when they did something like that, so that was a plus for me.

Game Play: 8/10
You control Ed throughout this action/RPG. Displayed at the bottom of the screen is your HP and the alchemy meter. When you hold down the O button, you charge it up. If not standing near an object that can be transmutated, you can create a stone wall that acts as a shield and stepping stone, or make rock spikes used to attack enemies. If near an object that can be changed, you can turn them into weapons using the alchemy bar. There are usually two objects that can be formed. The first is a weaker weapon, the second is more powerful. Each weapon is symbolized with an icon and color. Red weapons are for Ed, blue are for Al, and grey ones are for both. There are literally TONS and TONS of weapons to make because there are objects EVERYWHERE in the stages. Knives, swords, spears, boomerangs, chakrams, and tons of other weapons are for Ed to use. Al can use giant mallets, pick-axes, lances, and broad swords. However, Al’s weapons don’t last forever. If you have the right item, you can transmutate an element (fire, wind, or water) to a weapon. Gray weapons include Gatling guns, giant cross-bows, torches, flame throwers, and cannons. Other gray weapons last only for a few seconds. There are decoys that look like Ed, bombs, wind tunnels, and giant fire hydrants. Ed and Al can manage on their own without weapons. Ed uses a blade attached to his arm while Al just uses his two fists. Ed can dodge attacks with the R2 button, and if he gets knocked down he can perform a break-fall by hitting the X button at the right moment.

Ed can call Al over to him using the R1 button. Once Al gets close enough, Ed can have him tackle an opponent for some high damage or he can have him guard Ed from attacks. Another thing you can do is have Ed charge up the alchemy gauge when near Al, and then hit the R1 button to perform a special attack. You fill up the special attack meter by landing hits on the enemies. Since you don’t control Al other than his tackle, he just does his own thing. Since Al is so big, he is prone to getting attacked. The AI isn’t too bad, but it could use some adjustment. Annoyingly enough you can’t adjust the AI controls, so you’re stuck with the settings.

Then again, the enemy AI isn’t that bright either. In fact, with the exception of the fun boss battles, you have some really easy enemies to deal with. Even the enemies with high defense can be killed pretty easily with a cannon or a Gatling gun. If you’re looking for a challenge, then this game may not be right for you because it’s a rather easy title. I never had any trouble with the game. The only moment I recall getting frustrated was when I had to fight a boss that wouldn’t stop flying around in the air.

Ed’s normal attack is a three hit combo. If you hit the square button at the right moment before the third hit, you can perform an Accu-Strike. These are just more powerful forms of the last attack, denoted by a quick flash on the weapon. The melee weapons that Ed equips all have Accu-Strikes. You can create combos by pressing the O button at the right time, which will cause rock spikes to be part of the combo. There is a combo counter on the right hand side of the screen, and the more hits you land the more experience you get. All enemies leave experience points (and usually items) but you can get more experience with a higher combo. Obviously, when you get enough experience you’ll level up. With each level up you are granted some bonus points. These are used to add to Al’s and Ed’s statistics.

One of the coolest things about the action in this game is the Frenzy meter. When this meter is full, Ed and Al hit harder and receive more experience points from enemies. However, the Frenzy will end when either of the two brother’s HP reaches zero, Ed falls down, or you use a save point. This is great way to build up your levels. Also, the special attack changes and does more damage. But, using this special attack will get rid of the mode.

There are tons of items in the game to find. Treasures are scattered throughout all the stages. Ed and Al can also equip two accessories, which adds a bit of customization to the game. These can do things like raise stats, or grant more experience points with higher combos.

Overall, the action is fun, fast, and usually intense. It does get tedious at times, but that’s expected of most action games. On the other hand, a lot of the action games I’ve played are relatively more difficult than Full Metal Alchemist.

Graphics: 9/10
The backgrounds were really nice in this game. There were details everywhere, such as roads made of bricks and water falls flowing freely. I really liked the backgrounds, and what’s really cool was the fact that you could walk and explore nearly every nook and cranny in the stages. The character designs, while rather simple, get the job done. They look like they would in a 3D world, so the transition from 2D anime to 3D video game was well executed. The weapons all look awesome, especially when transmutated with an element. There aren’t any dazzling special effects, but there will be times when you will say, “Damn…that was cool.” If I recall correctly, there were about 20 anime cut scenes. These were done very well. Sure the dubbing wasn’t the greatest, and some sub-titles would have been helpful, but they were still a nice break from the action. All in all, the graphics were nice. There was by no means any eye candy, but they were still a pleasure to admire during most instances.

Music and Sound: 6/10
The music isn’t the greatest thing this game has going for it. I can’t recall any tracks getting stuck in my head or making me search for the remote to turn up the volume. Hell, even the J-Pop ending theme song wasn’t that great. I enjoyed the music, but by no means would I hunt down the OST.

The same can be said about the sound. It’s just there. Some of the battle cries Al makes sound really odd, but that’s probably because of a tiny glitch in the system. The same thing can be said with Ed’s “Take this!”

Replay Value: 4/10
After finishing the game once (about 15 hours) you can start a New Game + that carries over all of your items and accessories. This also gets you the chance to find the in-game movies and graphics from the anime. Other than that, there is little reason to go through the game twice. I will be selling this for credit.

Buy or Rent: Rent
This game is short, linear, and easy. Renting this game is the best way to go. Save your 50 dollars.

Full Metal Alchemist was fun. It’s by no means something that I will hold onto forever, but it’s still a game worth checking out. It’s short, so you it won’t take you too long to complete fully. For those who are familiar with the anime, it is definitely worth checking out. The same can be said for those interested in the anime. Alchemy has never been this much fun! You may not be turning anything into gold, but when you see a potted plant transmutate into a machine gun…you really won’t care.