Orphen should stick with novels and anime. 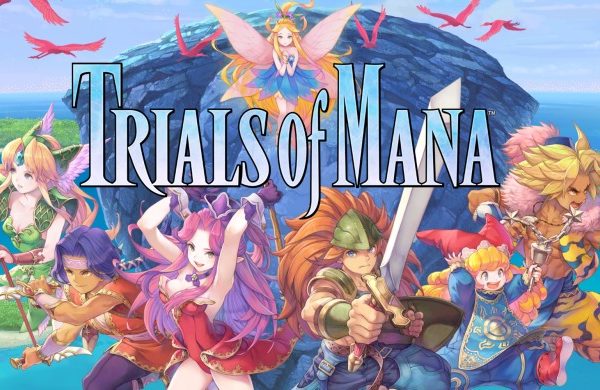 One of the games included in the Collection of Mana was one of the most longed for games during the Super Nintendo’s era: Secret of Mana 2. Officially renamed to Trials of Mana, the game really showed what the Super Nintendo could do in terms of graphics, music, story and gameplay. But, the game wasn’t without issues. I embraced the game and all of its thorns, but at the same time, I realized it needed fixing. All of those fixes were implemented in a fully realized remake of Trials of Mana. A proper remake through and through, Trials of Mana is the 3D Mana game fans have been wanting for years. Whether you’ve played the original or are a fresh face, Trials of Mana is an amazing game that everyone can enjoy.

If you have any familiarity with the original, then the biggest change you’ll notice in the Trials of Mana remake is the presentation. The 3D graphics, revamped score, and voice acting modernize the game for today’s generation. As much as I prefer 2D sprites, there’s no denying that the game looks and sounds beautiful. For those that wish to enjoy the game with a retro vibe, you can select the original soundtrack from the Super Nintendo version. The voice acting can be slightly awkward (Charlotte talks like Elmer Fudd) but it’s a minor issue. There are English and Japanese voice options.

In fact, the script has remained unchanged for the most part. This can be a good or bad thing depending on your point of view. Trials of Mana takes place in a world where multiple kingdoms are trying to control the power of mana for their selfish desires. A fairy goes on a journey to find heroes worthy of defending mana from this evil. You start the game by selecting one of six possible heroes, and then selecting two companions. Your choice of starting characters will alter parts of the story. No matter who you pick, your quest will take you on a whimsical journey that showcases the high-fantasy the series is known for. With six possible protagonists, it’s fun to replay the game over and over to experience the story again.

The gameplay is where Trials of Mana luminously shines. Combining the best parts of the original with new features, playing Trials of Mana is always wonderful. During my time with it, not once did I find myself getting bored whether I was in a town, a dungeon, a field, or traveling between any of those places via sky, land or sea. Everywhere you explore is filled with hidden items and treasures. Towns have plenty of citizens with lots to say. Features from the original game that were considered tedious (shopping, planting seeds for items, navigating menus) have been streamlined to perfection.

Perhaps the biggest change outside of the presentation is the combat. Trials of Mana’s combat is entertaining from the start. Characters can perform jumps, dodges, weak and strong attacks, and they’re able to combine said attacks into various combos. Enemies will drop blue crystals that build up a gauge that allows your character to use a special attack. While you control one character (which you can switch on the fly) the AI handles the other two. The AI settings have been completely revamped so they’ll play to your liking. One of the most important features are the shortcut commands. So, for characters that rely heavily on magic like Charlotte or Angela, magic can be cast without opening the Ring Menu. After a character levels up, they can distribute points to their base stats to earn passive abilities and bonuses.

Most importantly, the class change system is back and gives your characters even more options for development. Which, brings up another important feature: all of the classes have their uses. Now, Hawkeye’s Ranger classes and/or Duran’s Paladin classes can fit into any party. The sheer variety gives you so many options for each game file. Another new feature lets you reset both your ability points and your class in case you wish to try new character builds.

By the time I finished as much as I could in my first run, I clocked 30 hours. I missed some collectables and a few bonus fights, but I plan on dealing with those in a second run. Trials of Mana features a New Game Plus option for those that wish to experience the game again while steamrolling any opposition. To really see it all, Trials of Mana could potentially last up to 100 hours. Obviously, I’m very pleased with this remake. Mana fans have been asking for something like this for years. Square -finally- delivered. I hope this trend continues and we continue to get more games in the series of this quality.

Overall, 10/10: A perfect game? No, but it gets a perfect score for being so fantastic. Trials of Mana is the Mana game that fans of the franchise have been longing for.