Crying more tears of vermilion in the moonlight.

Avan needs detention, suspension and a hammer to his face.

There is nothing legendary about The Legend of Heroes: A Tear of Vermillion. 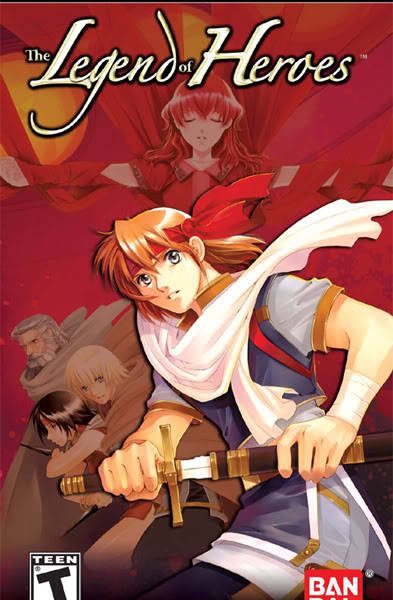 Author’s Note: This review was originally published on March 6th, 2006. This was the first PSP game that I ever played. I remember forcing myself to get through it. Eventually, I reached a breaking point and had to surrender to the game’s dullness.

Needless to say that the PSP’s shiny screen has the potential to show off some gorgeous graphics. Of all the games I’ve played, the potential was realized. However, good graphics don’t make a good game. This is the case especially with The Legend of Heroes: A Tear of Vermillion. RPGs on the PSP may be few, but after playing so many RPGs, I personally think we could’ve done without The Legend of Heroes.

There are so many reasons why I feel this way, too. The first happens to be with the most important part of the game: the game play. The game play is the same thing you’ve encountered in any RPG. You have your party of heroes who go to towns, talk with NPCs, buy items and equipment, and finds out their next objective in a very linear quest. I like linearity if the game play is interesting, but LoH disappoints.

The battles are as boring as they come. Sure, the characters have their own unique set of skills and magic, and it’s kind of cool to watch them chant a little mantra before they cast a spell, but again it’s too basic for me. Your characters can attack, defend, and use items. Furthermore, there is a cool “Limit Break” system. After characters attack enough, they can release a super powerful attack. Now, in a lot of games I have enjoyed this system but another thing hinders the system: range. There is a needless “range” system in which your characters can only move so far before they give up their turn. The same goes with magic and items: it all has a range. This is a reason why battles take a bit longer than they should. Another reason is due to the fact that your characters miss a lot, and they usually are fighting enemies that come in groups of four. Most of the RPG gives you a party of two or three characters that you get as the story progresses. In fact, your final party of four is chosen for you.

Another rather lame thing about the game play is the Pet System. At the start of the game, you’re given a random pet that follows you everywhere. It finds you items, and you can change it’s mood by giving it food, scolding it, or praising it. I’ve found that NONE of these do as they are supposed to: a pissed off pet will all of a sudden become very happy if you scold it. Also, pet food does nothing, at least as far I could tell. The pet will also assist you in battle by damaging all enemies or boosting your stats. Like the range system in the battles, the Pet System is useless. If an RPG has a back-to-basics set up, I typically don’t mind if the story or characters are interesting, but once again the game fails in these areas.

The story stars Avin and his “best friend” Mile. By “best friend” I mean “best friend with benefits.” Just read some of the text in the game, you’ll see why I see this. Don’t think I’m against things like this, especially in RPGs. Joachim Valentine from Shadow Hearts 2 is one of my favorite characters ever. Anyways, the two friends are out to save Avin’s sister who was taken away from Avin at a very young age. Apparently, she holds some secret that could change the fate of the entire world. Again, cliche at it’s finest. The characters are also basic and predictable. How many more kunoichi are we going to have to see?

At least the graphics, which you will see, are gorgeous. Hand drawn anime portraits accompany the dialogue, each with a different look for their moods. The backgrounds and sprites are just as beautiful, showing some awesome lighting effects and nifty spells. It just goes to show you that 2D will live forever. Even the menus are a pleasure to look at. If anything, the game looks good. It doesn’t sound good, though. The music isn’t bad, but it just could’ve been better. Much better. I don’t recall any of the tracks. There is no voice acting in the game, so that’s rather nice.

Two wrongs don’t make a right. Actually, make that three wrongs: basic boring game play, unoriginal story, and cookie cutter characters. If one of those were new and/or original, I would’ve stuck with the game for much longer. I’m pretty easy to please…not in the Avin <3s Mile sort of way, but the distracted by fun video games way. Mindless humor aside, I say rent this game. This is especially true if you are an RPG veteran and don’t want to deal with anything old school. Don’t get me wrong, I love old school, but if the important game aspects are lacking then there is no point in playing it. If you are hot and heavy for an RPG, I would check out importing Breath of Fire III or Tales of Eternia. Don’t want to import? Give Kingdom of Heaven a try. Legend of Heroes just fails to deliver an RPG experience worthy for the PSP.