Tail Concerto is a return to the ideals that make games fun. Sort of. 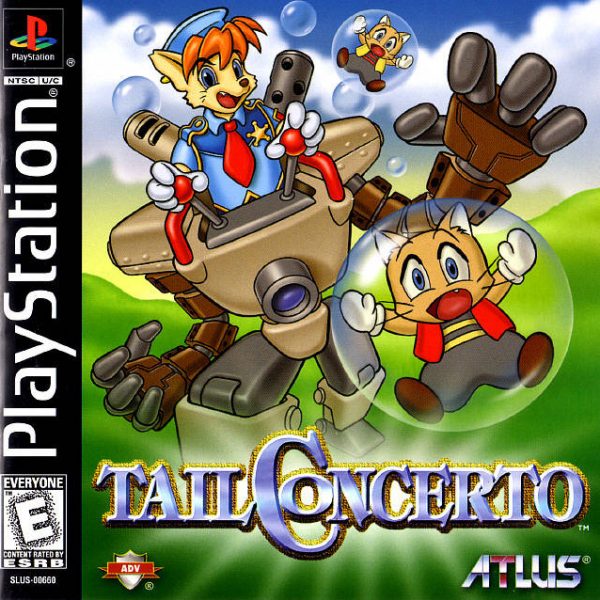 I remember a lot of things about Thousand Arms. One of those things was the massive instruction manual filled with information, character bios, developer notes, artwork, and more. On the back of the manual was an advertisement for a 3D platformer called Tail Concerto. Most action games in the third dimension housed on the PlayStation were hard to play during their heyday, and the majority of them haven’t aged well. So, it was easy for me to write off Tail Concerto despite the Atlus quality seal and a relatable Saturday morning cartoon vibe shown in the ad. Sure, Tail Concerto isn’t the most polished 3D action game. But, there is an undeniable charm to it. It has a gentle vibe that is perfect for younger gamers and for gamers that want to step back into simpler times. So, how has it stood the test of time? And, is it worth the high price tag? Let’s take a look.

Tail Concerto takes place in a fantastical world made up floating islands called Prairie. The denizens of Prairie are anthropomorphic dog and cat people that live their days excavating ancient ruins and discovering hidden artifacts from lost civilizations. You play as a member of the Prairie Police named Waffle Ryebread. At the start of the game, Waffle is waking up on his first day off from the force. Unfortunately, his days off are interrupted when he gets a call from HQ telling him to the island of Resaca. Apparently, the Black Cats Gang is up to no good. Waffle is on the case. If the cover art didn’t give it away, then the synopsis I wrote for the game’s story should: this is a lighthearted game. I wouldn’t have it any other way. Waffle, the Black Cats Gang and other residents of Prairie an adorable group of characters that will have you smiling with their antics from start to finish.

Another reason that’ll get you smiling during your time with Tail Concerto is the presentation. Yes, the voice acting isn’t great. Yes, the music fades into the background and doesn’t warrant a listen outside of game time. But, the world is colorful and detailed. The world of Prairie has a lot of personality. The island of Airleaf is composed of tiny platforms where a loony scientist does his research. On the island of Ferzen you’ll find industrious workers spending their days in the mines. Topping off the game’s look are some polished anime cut scenes.

Waffle’s police duty throughout Prairie is straightforward in theory. You’ll always know what to do to move the story forward. Talking to townsfolk will provide you with additional hints, but returning to Waffle’s house on the island of Porto is another way to remind yourself of where to head next. For most of the game, Waffle will be in his Police Robo: a big, bipedal robot with long arms. The Police Robo can run at a decent speed, jump, dodge, and climb. For offense, the Police Robo can rely on its massive arms to capture enemies, throw objects or even return fire when certain enemies chuck bombs at Waffle. The Police Robo’s most useful tool is the Bubble Blaster. These blasts of sudsy soap can capture enemies or damage metallic structures. You’ll be using the Bubble Blaster against the multitude of bosses that try to stop Waffle’s investigations. There will be some instances where Waffle will have to fly with a jeptack, but these are rare.

“Clunky” is a word that is often used to describe 3D games when they don’t run as smoothly as the developers intended. Tail Concerto isn’t clunky, but it’s not smooth, either. The Police Robo has to take a running start. Stopping it has a slight delay. The descension from its jump can be stalled but going from platform to platform in some later areas is tricky. Waffle will often do a “swing and a miss” whether he’s trying to grab something moving or stationary. What does all this mean? It means that Tail Concerto isn’t a smooth ride. There will be a lot of missed jumps, bashes in the face and knock downs. The good news is that the Police Robo is super sturdy. To add, there’s a ton of recovery options and extra item pick-ups littered throughout Prairie. Tail Concerto is forgiving. Gamers of all skill level won’t ever have to worry about the game over screen. Still, a smoother ride to the end would have made Tail Concerto age better. Heck, I’m not sure if it would have been the 3D platformer of the year back when it was released.

This, along with its four to five hour playtime and the insane price tag (last I checked it was going from 300 dollars to 900 dollars – ridiculous) make it hard to recommend. Sure, it’s a fun game. But it’s not worth the price. If that instantly recognizable Atlus logo was nowhere to be seen, then you’d be finding Tail Concerto in bargain bins nationwide among all the other 3D action games. Unfortunately, that’s not the case. I think folks should play Tail Concerto, but they should do so in a way that doesn’t cost them an arm and a leg. Its issues, while minor, just don’t justify the price.

Overall, 7.5/10: The advent of the Little Tail Bronx is enjoyable. But, it’s as enjoyable (and expensive) as a 3D action game from the PlayStation era (and Atlus) can be.