Adventures of Mana is a solid reimagining of the Mana that started it all.

SaGa: Scarlet Grace Ambitions is unlike any RPG you have ever played. 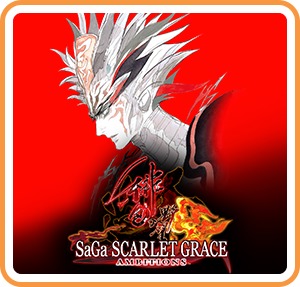 Up to this point, 2021 has been filled with gaming surprises. Perhaps the two most notable are my new interest in Dragon Quest and SaGa becoming my favorite game series. Completing SaGa Frontier 2 and struggling through Unlimited Saga with Kurt, Laura and Judy made me realize how important the series is to the game industry. Even the most polished games fumble, but that’s okay. Series creator Akitoshi Kawazu isn’t afraid to take risks. The twelfth entry in the series, SaGa: Scarlet Grace Ambitions, is no exception. There are a few questionable design choices, but the game turned out to be one of the best, original RPGs I’ve ever played.

Scarlet Grace Ambitions revolves around the lore of the Firebringer, an evil deity that wrought endless devastation upon humanity. Upon the Firebringer’s overdue defeat, scarlet shards fell from the heavens. The victory was short lived because the empire that banded together to topple him began to fight amongst themselves. The fighting has been going on for the last 70 years. A new hero needs to rise among the ranks to put a stop to the endless fighting. Otherwise, the world will be in a worse state than it was during the Firebringer’s ruling.

When starting a new game, you’ll complete a short quiz. The answers will grant bonus stats to one of four possible main characters. Typically, you’ll want to start with Urpina. However, you can pick any of the characters. Urpina’s journey is considered the most new-user friendly since it offers more linearity at the start. Fans of the series might know where I’m going with this: after your character’s introduction, you’re given free reign to wander wherever you please in Scarlet Grace. Each character has a goal they must accomplish, but it’s not always clear how to go about accomplishing said goal. With Urpina’s journey, you’re given more time to get acclimated to the world. But, no matter who you pick, chances are you’ll find yourself scratching your head attempting to figure out what to do.

But, that’s half the fun in Scarlet Grace. The massive world is divided into regions. Each region is filled with stuff to explore. There are caves, mines, glaciers, labyrinths, orchards, giant mushrooms, and tons more. And, the coolest thing is that you don’t physically explore any of them. Instead, you’ll examine them, make a choice that may or may not impact a future event, uncover some new items, and/or enter combat. During my time with Urpina, there were moments that I forgot that I had a world to save because I kept discovering new things to interact with. Towns are similar; there’s no time wasted moving from one place to another. Simply select what you want to do (blacksmithing, guild request, etc.) and carry on. This method of exploration is very different from other RPGs and the game is better for it. There’s a lot to see; the game lets you see all of it without unnecessary spelunking.

Perhaps the biggest reward you’ll earn in Scarlet Grace is victory in combat. Exploration is half the fun, but combat makes up the other half. Nine times out of ten, Scarlet Grace is a difficult game. This is true even when the battle is given an easy ranking. Indeed, the game will straight up tell you how difficult the battle you’re about to enter will be. But even battles ranked as hard can be finished with the right strategy. Before a fight begins, you decide which five party members will participate and their formation. There are multiple formations to discover. Each one offers some sort of advantage. This allows for incredible flexibility for building favorite battle parties. When combat begins, both your team and the enemy team need to utilize a resource called Battle Points. Each action costs a certain number of BP, with some actions impacting turn order. A timeline on the bottom of the screen will generously show you where your characters will land after selecting a certain action. Another perk is that you’ll see what your enemies are planning to do. Participants that don’t act will defend for the round.

When all selections have been made, combat begins. You’ll watch as both sides lay into one another. Initial rounds are typically uneventful. In typical SaGa fashion, there’s always a chance that members of your team will glimmer new techniques. In Scarlet Grace the character will perform their intended attack, and then follow it up with the glimmered attack. After the round is over, your team may receive additional BP depending on the formation. The process continues until one side falls. It might sound simple, but there’s a lot of strategy that needs to be considered. First, status effects can turn the tide of battle: poison, sleep, paralysis, and more can turn an impossible battle into a simple cakewalk. But, do you risk the status attack missing? Also, the more powerful techniques will require more BP. Do you want to risk using all your BP during a round while the other teammates defend? Of course, magic has its own quirks. Do you let your mage spend one round casting a simple spell or do you have your mage spend more rounds charging a more deadly one? The most important thing to keep in mind is that anytime someone on the battlefield is knocked out, they disappear from the timeline. If two or more members of the same team touch (enemy or player) then they’ll perform a very powerful combination attack. Like status effects, these can turn the tide of battle in an instant. With healing spells being limited and the ability to revive teammates even more scarce, the key to victory is patience and strategy. When combat ends, you might be rewarded with an increase in HP and an increase in skill level with the character’s weapon of choice. You’ll also receive raw materials for equipment upgrades.

You’ll need to get used to seeing your characters get knocked out during combat. You’re expected to switch your retinue and formation often. This is especially true during the early parts of the game. When a character is knocked out, they lose Life Points. They can recover LP by sitting out of two battles. If they lose all LP, then it’ll take a longer time for them to fully recover. It sounds unfair, but combat is never mindless. Button mashing the attack button would mean a one-way ticket to a game over. Sometimes, your party will receive random benisons from Celestials: beings from on high that pop in at the best chance possible. Also, upgrading your equipment consistently will ensure higher defense and attack. Finally, there are tons of possible characters to recruit each with their own specialty. In other words, Scarlet Grace is challenging, but rising to the challenge is doable and fun.

Topping off the gameplay is excellent presentation. Scarlet Grace has a unique look. The expressive characters are adorned in interesting ensemble and perform flashy attacks in combat. The world presents itself in a popup book format. You still move your character around the world map, but when something you can interact with is nearby it will spring to life. It’s a fun look. Conversations are presented in a traditional talking head format. A good chunk of the game features solid voice acting. As mentioned, there are tons of potential characters to recruit. The voice acting gives them enough personality to make them stand apart from one another. Finally, and unsurprisingly, the music is fantastic.

Playing through the first time as Urpina, I logged about 30 hours into Scarlet Grace. However, there was a lot – and I do mean a lot – of content that I missed. The most notable are the optional super bosses and the plethora of side quests. Scarlet Grace has a New Game Plus option which will make future playthroughs more streamlined. If my first run was any indication, then Scarlet Grace can last hundreds of hours. Fortunately, those hours would be fully enjoyed. SaGa: Scarlet Grace Ambitions is one of the most original RPGs I’ve played. Its originality is what makes it so much fun. Acclimating to combat and exploration will take some time, but like most games in the series, the enjoyment will be palpable when things click. It won’t be for all RPG fans, but those that do take the time to understand it will be in for a fantastic ride.

Overall, 9/10: A refreshing take on RPGs that always keeps you on your toes make SaGa: Scarlet Grace Ambitions an excellent original.