Next time someone tells you that all RPGs are the same, have them hold your beer and show them this. 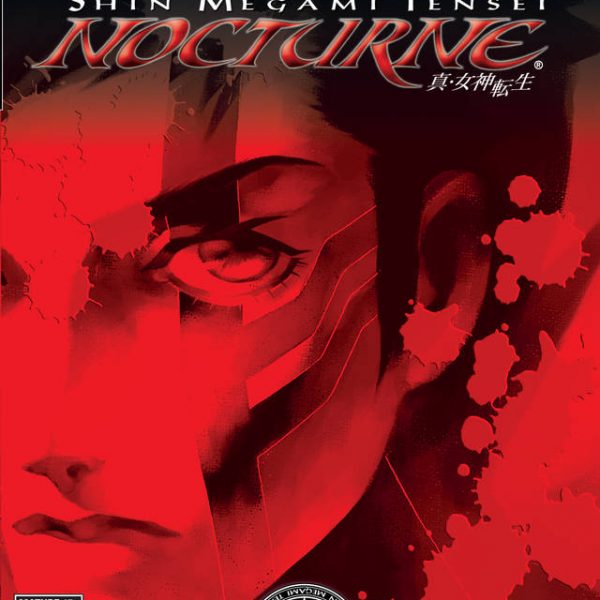 Usually when I finish an RPG, I am about ready for the journey to end. The game can last as little as 20 hours or close to 100 hours, but chances are I’m glad to see the credits roll when they do. In the case of Shin Megami Tensei: Nocturne, I wasn’t ready. Despite clocking in nearly 60 hours of game time and finishing as much as I could, I didn’t want to stop playing. There is incentive to return to my current game and/or start a new one, but my first experience with Nocturne truly ended after those credits finished. I look back at said experience fondly. I recommend Shin Megami Tensei: Nocturne to everyone.

Shin Megami Tensei: Nocturne is the third entry in Atlus’ critically acclaimed Shin Megami Tensei series. However, you can jump right into this game since it has no relation to previous entries. Starting in modern day Tokyo, Nocturne focuses on a protagonist that you name. After awaking from a strange dream, he arrives at Shinjuku Medical Center to meet two of his friends: Chiaki Hayasaka and Isamu Nitta. The three have agreed to meet to check in on their sick teacher, Yuko Takao. However, things are far from normal. Days prior, rival cults got into a fight that resulted in some fatalities. The hospital is completely abandoned, with the exception of the protagonist and his classmates. And as he wanders the hallowed hospital halls, he encounters strange individuals that almost kill him on the spot. Just when things couldn’t get weirder, the protagonist finds his teacher who warns him that the world is about be reborn thanks to an event called The Conception. The Conception occurs and Tokyo is turned into the bizarre Vortex World. Finally, the protagonist turns into the Demi-fiend: half-human and half-demon. You must guide the Demi-fiend through post-apocalyptic Tokyo. The choices you make will determine his, and the rest of the world’s, ultimate fate.

The thing I really like about Nocturne is how the Vortex World feels both empty and full at the same time. The Demi-fiend is truly all alone in this strange, new world. And yet, there are plenty of demons, souls, twitchy beings called Manikins, and other entities that are trying to claim the world as their own that you can speak with. The story in Nocturne is excellent. It’s dark, atmospheric and filled with some disturbing situations. Throughout the game, you can make choices that influence which ending you will receive. Will you try to retain your humanity? Or, will give in to your demonic powers and become the world’s new supreme being? No matter what you do, you will have to face multiple obstacles and come face to face with gruesome demons that want nothing more than to see you destroyed.

Most of your time in Nocturne is spent going through various demon infested areas. On the world map, you can head to different locations, as well as interact with NPCs and discover treasures. Dungeons are where you will be spending the majority of your time. You will go through a series of mazes and labyrinths, most of which have some sort of puzzle for you to solve. They are always exciting; full of dangers and discoveries. Each dungeon usually has a series of Terminals that allow you to save your game and act as warp points. At the Junk Shop, you can spend your hard-earned Macca to buy new items. The Fountain of Life allows you to recover your energy, and Rag’s Jewelry lets you trade in precious gems for exclusive rewards. Most importantly, there is the Cathedral of Shadows where you can fuse your demons to create new and more powerful ones.

In Nocturne, the Demi-fiend doesn’t fight alone. You can recruit demons during battle to fight alongside you. Most of the time, they’ll ask for some money or an item in order to be convinced it’s worth their time to join. Sometimes, they’ll ask you a philosophical question and join based on your answer. The effort that you need to go through to earn their trust is always worth it in the end. Each demon has the potential to learn new skills as they level up, and many of them have the ability to morph into new demons that don’t exist in the wild. The potential to build the perfect party is limitless due to the fact that each new area houses new demons. As a result, you need to build new parties with the right demons. Of course, the Demi-fiend can be molded in a way that suits your play style thanks to the various Magatama he can ingest. Magatama are living parasites that grant the host various abilities and powers. When the Demi-fiend levels up, you can upgrade a statistic of your choice. At various levels, you will earn new abilities from the currently ingested Magatama. Since you only have the space for eight skills, you need to carefully plan the Demi-fiend’s layout.

This is because the battle system in Nocturne, while simple in theory, will cause you lots of hurt if you’re not prepared. Most battles occur randomly. A sensor on your screen will change colors indicating the likelihood of a battle. Your side and the enemy’s side take turns walloping on each other until only one side remains. Nocturne uses the Press Turn system, which is something I grew used to back when I played the Digital Devil Saga games. By hitting an enemy with its weakness and/or landing a critical hit, you get an extra turn. Similarly, the enemies can do the same to you. However, you can negate their turns by nullifying, voiding or absorbing their attacks. You can also cause them to lose turns simply by dodging what they throw at you. As simple as it is, exposing enemy weaknesses and being prepared for their arsenal will make or break you. This especially holds true during the brutal boss battles. Without the right skills, chances are you’ll get a game over sooner than you think. Even with the right set up, all of the enemies in Nocturne hit hard. This is a challenging game through and through. There is always a sense of tension as you wander through new areas because you never know what new demons await. With the right demons in your party and the right Magatama dwelling in the Demi-fiend, any battle can go from impossible to winnable.

Nocturne already offers plenty, so I won’t go into the phases of Kagutsuchi, sacrificing demons, the Fiends, the Labyrinth of Amala, or the rest of the content packed into the disc. However, two more features deserve praise. The first is the graphical presentation. This is a fantastic looking game. The unique demon designs range from demure to despicable. Watching your team decimate gargantuan bosses with a variety of skills and spells is as rewarding as it is entertaining. Tokyo might have been destroyed, but it still looks amazing. The music, composed by Shoji Meguro, deserves equal levels of praise. A combination of metal, 1980s punk, and jazz make this a soundtrack worth listening to long after the game ends.

And unfortunately, all good things must come to an end. For those that wish to experience as much as possible their first time through Nocturne, you can easily clock in 100 hours. Even then, chances are you’ll still be longing for more. Starting a new cycle with cleared save data allows you to alter the Demi-fiend’s outfit and access all of the demon’s you registered at the Cathedral of Shadows. Those that didn’t get the ending they wanted will also find some reason to go through the journey again. There a are a few minor flaws worth mentioning in Nocturne. The first is that the random encounter rate can really get tiring when you’re looking for a chance to save. The second is that there is a boss battle early in the game that is notorious for being extremely difficult, even with the right preparations. These issues aside, Shin Megami Tensei: Nocturne comes highly recommend to all RPG fans. My experience with the Shin Megami Tensei universe has been minimal. Thanks to Nocturne, I plan on exploring it further.