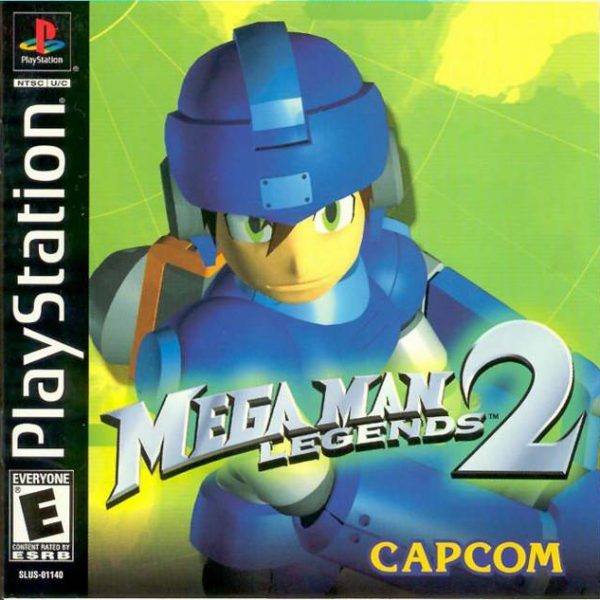 I finished Mega Man Legends disappointed. It was a charming attempt to move the blue bomber, one of my favorite video game characters of all time, into the third dimension. It didn’t work well. The biggest issue was the controls, which irrevocably created issues with the camera. I was glad when it ended. It took me a minute to even warm up to the idea of playing Mega Man Legends 2. Now that I’ve finished it, I’m excited to say that it plays and looks much better than the progenitor. But, just like before, I was glad when Mega Man Legends 2 ended.

Mega Man and his friend Roll Casket are diggers that travel the world in their ship, the Flutter, searching for a treasure called the Mother Lode. During their travels, they hope to recover Mega Man’s lost memories and learn more about the whereabouts of Roll’s parents. One day, they rescue a ship called the Sulphur Bottom from the dangerous Forbidden Island. Inside the ship is successful businessman Von Muller and Roll’s grandfather, Barrel. They tell Mega Man and Roll that the Mother Lode could be theirs if they find four keys scattered throughout the world. Unfortunately, pirates are also in search of the keys. Once again, Mega Man has his work cut out for him.

The story in Legends 2 is a heartwarming, lighthearted tale with lots of humor. Near the end the game when major plot reveals happen, the game manages to straddle the line between serious and silly. There’s a solid cast of characters, most notably the hilarious Tron Bonne, that make each story event enjoyable. There are times when the dialogue transitions from cute to saccharine, but in a strange way it adds to the overall package. Much of the game is fully voiced. The voice acting is on point for the most part. Susan Roman (best known as the voice behind Sailor Jupiter) gives Mega Man a youthful spin that works well for the narrative.

If you’ve played Mega Man Legends, then it’ll be clear from the start that Mega Man Legends 2 improved upon its progenitor. You control Mega Man in full 3D environments. These include towns, ruins, ships, and more. His movements are much smoother than before. Rotating the camera isn’t as cumbersome, either. One of the neat things is that every area has lots of stuff to explore. Reading Mega Man’s thoughts on this or that as well as uncovering hidden treasures is fun. In the Flutter, you can chat with Roll to add new additions to the ship. You can also create and upgrade special weapons for Mega Man. This is fun, but there are downsides. The biggest issue is that Mega Man can only equip one special weapon at a time. If you want something different, then you need to hike back to the Flutter and have it changed. Upgrades are ludicrously expensive. Many of the special weapons aren’t even worth the cost and become a waste of precious money.

As Mega Man moves within and between ancient ruins in search of keys, he’ll encounter Reaverbots. These robots from the olden times are out to stop Mega Man from achieving his goals. Mega Man can equip a variety of armor pieces to help him both offensively and defensively. He can equip one special weapon at a time which can be swapped in the menu screen with a claw that is used to grab enemies, people, or objects. Combat in Mega Man feels smoother, and often times it’s enjoyable when up against a few enemies or one of the game’s stylish bosses. Other times, the problems from before show up such as cumbersome targeting due to too many enemies on screen. The combat is more enjoyable, but it’s still doesn’t reach the level of excitement and satisfaction from the the 2D counterparts. My biggest issue is when Mega Man is in areas filled with water. Mega Man and water do not mix in Legends 2. If you play it, then you’ll understand why.

Mega Man Legends 2 looks great. The graphics are sharp for a 3D PlayStation game. Characters are expressive and vibrant. In some ways, it feels like you’re watching a Saturday morning cartoon but in the third dimension. The music is sadly lacking. Typically, I go into a Mega Man game with high expectations for the music. My expectations weren’t high for Legends 2 and yet they still weren’t met.

Mega Man Legends 2 has a lot of side content that you can explore. The most interesting is increasing Mega Man’s Digger Licence ranking. By finishing trials, you can permanently increase the difficulty of the enemies in the ruins, but with this comes better rewards. If you really want to see it all, you’ll have to get ready to grind for more cash so you can fully upgrade all of Mega Man’s special weapons. Otherwise, you can expect to finish Mega Man Legends 2 in about 10 to 15 hours. Once again, I found myself satisfied when the game ended. It’s not because the journey was epic, but because I didn’t have to play the game any more. Interestingly, Mega Man Legends 2 ends on a cliffhanger that sets the stage for the now cancelled Mega Man Legends 3. I know a lot of fans were upset by the cancellation of Legends 3. Having gone through both Legends and Legends 2, I’m not one of those upset fans.

Overall, 6.5/10: While functionally better than the first game, Mega Man Legends 2 is still a rough transition from 2D to 3D for Mega Man.