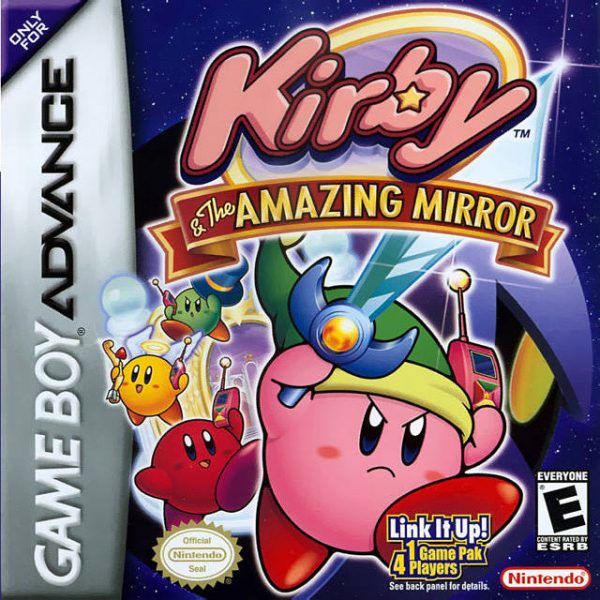 My favorite Nintendo mascot is no stranger to the perils of adventure. He’s been through it all and has managed to emerge victorious and adorable. So, when the folks at HAL and Nintendo decide to change up the formula for our favorite pink puff again, we can only wonder if he’ll be tough enough to handle it. While Kirby & the Amazing Mirror has a good amount of stuff in common with a traditional Kirby title, there is one major aspect that not only brings the experience down but makes it hard to recommend. But, we’ll get to that later.

The Amazing Mirror takes place in Dream Land. Well, that’s not entirely true. It actually takes place on the other side of the sky in Dream Land. This strange world is called the Mirror World and those brave enough to enter it are granted a wish from their soul’s reflection. Of course, seeing as Dream Land is prone to danger, no one is surprised when the Mirror World begins creating negative reflections. Meta Knight notices this anomaly, but gets sucked into the Mirror World. A shadowy version of Meta Knight emerges from the mirror and slices Kirby into four different colored Kirbys: pink, red, yellow and green. The four Kirbys head into Mirror World to set thing straight in another adventure.

Kirby’s final romp on the Game Boy Advance sounds familiar at first and is easy to pick and play for fans of the series. Kirby can dash, jump, float, shoot puff balls and slide. While under the endless ocean, he can swim and shoot a water gun. Most importantly, he can use his copy ability to swallow enemies and obtain their powers. Kirby’s copy ability has always been a staple in the series, so it makes me scratch my head as to why they limited certain powers in comparison to the classic Kirby Super Star. While abilities like sword and hammer perform like they have before, fun abilities like ice and beam lost most of their techniques. That said, there are some new abilities that are kind of fun. The cupid ability turns Kirby into an adorable cherub that lets him shoot arrows and fly. Missile lets Kirby turn into an unstoppable bunker buster. Most importantly, his Smash ability lets him use moves seen in Super Smash Bros. The new abilities are fun and might be reason enough to at least give the game a glance.

However, some new features never before seen in the series also make their debut and the result is less than impeccable. Using a cell phone (lawl what?) Kirby can call the other three Kirbys to help him fight enemies or solve simple puzzles. You can have a friend take control of a Kirby, or let the AI do the work. Kirby has always had a solid multiplayer, but using it in Amazing Mirror is a bit cumbersome. Kirby’s cellular device can also be used to let him to return to the main hub of the game: Rainbow Route. That’s right, I said hub. Instead of selecting levels from a world map, Kirby & the Amazing Mirror plays like Metroid or a contemporary Castlevania. This means that Kirby can travel to anywhere he pleases as long as he has the right copy ability. The goal of the game is to collect missing shards of a mirror. Once all of them are collected, you can fight the final boss. However, the way you go about this is up to you. While it’s a clever idea, the awful mapping system and overall design of the levels don’t work too well for our favorite pink puff. You see, the biggest change is also the most poorly executed is the way Kirby explores. Even veterans of the series will raise an eyebrow when they see how progression works. It can get confusing to figure out where you have and have not explored.

Of course, no Kirby title is complete without something to collect. In the case of the Amazing Mirror, Kirby can find treasure chests. Some of these will contain spray-paint to change the color of Kirby, music and maps of the area. You might even find a heart piece that increases Kirby’s energy. This last one is the most important because for some reason, enemies just love to kamikaze against Kirby. I consider myself to be a damn good gamer and Kirby is one of my favorite series of all times. However, I find the challenge to be annoying due to the fact that enemies constantly are up in your face. One hit means Kirby loses his copy ability and has to scurry to get it again.

The four Kirbys, the new and old enemies and the various bosses look absolutely wonderful. Cute graphics with even cuter colors shine on the GBA’s tiny screen. There are also new songs to the franchise that will have you humming along. The presentation in the Amazing Mirror is solid, but that’s to be expected. Also to be expected is the length. While the game has a confusing layout, you can find all of the collectables and defeat the final boss in only a few hours. Earning 100% lets you uncover new secrets. There are also some fun mini-games available to pass the time when you’re not in the maze of the Amazing Mirror.

As much as I love Kirby, this is one quest of his I don’t recommend. Sure, the idea of Kirby in a huge, Metroid-like universe sounds like a good idea on paper. It could have been, but there are too many mistakes that make it more of a chore than something enjoyable. While not as unconventional as other titles like Tilt n’ Tumble, Kirby & the Amazing Mirror still uses a different formula from the usual adventure.

Overall, 6/10: I think that if HAL decided to make this title similar to the others, it would have been more fun.