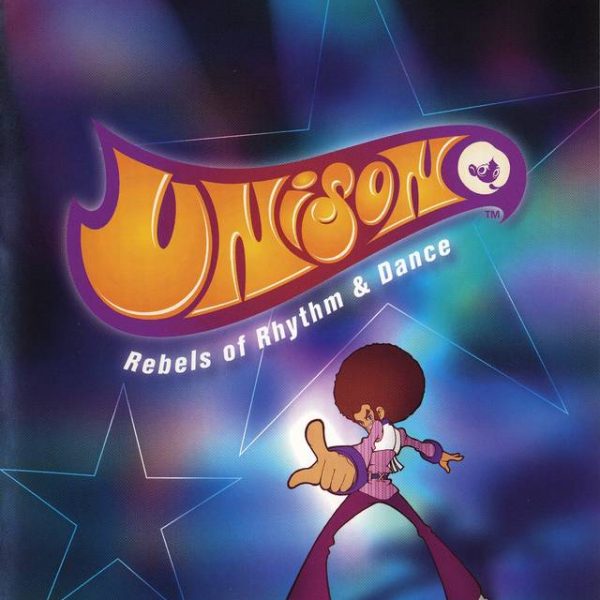 Author’s Note: This review was originally published on July 12th, 2003. It really shows, too. I still recommend Unison to fans of rhythm/music games. I don’t recommend them reading why from this review.

Another great music game that will be overlooked, Unison is a diamond in the rough.

Story: 9/10
In the high tech, futuristic city of Twinships, Emperor Ducker will banish anyone caught dancing. He feels that singing is the only way for music to be enjoyed. Little does he know that Doctor Dance, a man with some mysterious hair, is training three young girls to dance and change Twinships. Trill, Cela, and Chilly together have formed the dance team Unison and fight for their right to groove.

I love the light-hearted and cute story. It’s nothing deep, but what did you expect? The only reason why it didn’t receive a 10 is because it’s way too short.

Gameplay: 7/10
In each level, you perform a song. You are first given the opportunity to practice the song. Once you do well with that, you can then perform it on the stage via ”airjacking.” If you dance well, you go to the next level. If you don’t dance well, it’s Game Over.

You dance by memorizing set patterns with the analog sticks. It sounds hard, but it really is pretty easy. You can practice as much as you want, so you’re given plenty of opportunity to perfect the dance.

Overall, the gameplay is way too easy. It can be challenging (there are three difficulty levels), but it still is pretty easy to advance through the game without much trouble.

Characters: 10/10
CUUUUTE! That’s all I can say about the Unison girls. They are just so adorable! And the other characters are fun too. I really enjoyed the characters in this game.

Graphics: 10/10
This is the best part of the game. The way that the Unison girls move on stage is amazing. They are so fluid and free, you’ll want to watch them dance again and again. Luckily, you can because you can save the replays. Also, the character visuals are colorful and vibrant. The same thing goes for the back grounds and scenery. This game has fun, bright, and cheerful graphics.

Music and Sound: 10/10
Unlike other music and dance games, Unison’s soundtrack consists of some of your favorite songs. If you like disco, you’ll have YMCA, We Are Family, and That’s the Way (I Like it). There is also O.P.P. and Country Grammar for the ”gangsta rappas” out there. And let us not forget my favorite, Barbie Girl! This game has a great soundtrack! What sucks is that there are only 12 songs total, but with three difficulty levels for each one you won’t care.

The voice acting in the game fits each character perfectly. The sounds are very cartoony, which is very appropriate.

Replay Value: 10/10
As I mentioned, there are three difficulty levels (one for each girl). Because of this, you’ll be playing Unison many times. Also, there are some secret songs for you to unlock.

Difficulty: Easy overall, but sometimes Hard
You’ll pick the difficulty level from the start. But even you pick Very Hard (Chilly’s game), you’ll still be able to play through the levels without much hassle.

Buy or Rent: Buy
This is a hard game to find, so once you find it I suggest you buy it. It only cost me $15, so it’s not expensive.

Overall, Unison is one game you won’t want to miss out on. If you’re looking for some lovable characters, a fun story, and great music, Unison is the way to go.