Dragon Quest VII: Fragments of the Forgotten Past 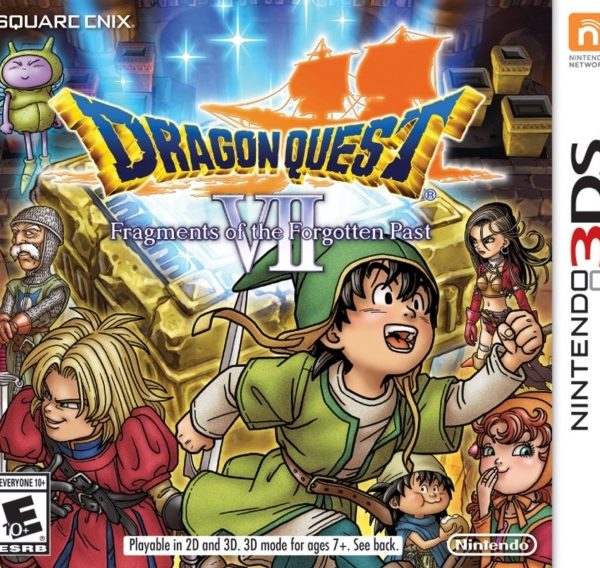 I remember when Dragon Quest VII: Fragments of the Forgotten Past was released in the states as Dragon Warrior VII. The fact that the west finally got another entry in the series was huge in and of itself. Sadly, at least from what I could tell, the game wasn’t as well received as Enix was hoping. The novelty of having another Dragon Quest sent to the west didn’t make up for some its alleged issues. The critiques were mostly about its slow start (it took three hours to get to the first battle), bloated story and weak soundtrack. Despite this, I’ve always had some curiosity about it. To this day, I still haven’t played the PlayStation version. However, I finished the new and improved remaster of it on the Nintendo 3DS. Dragon Quest VII: Fragments of the Forgotten Past is more than a game; it’s an undertaking. Sure, it doesn’t take three hours to get to the first battle, but that doesn’t make it any less of a mammoth to complete. This is a Dragon Questers Dragon Quest through and through.

Dragon Quest VII starts in a small fishing village called Pilchard Bay. You play as a young lad named Auster that enjoys making mischief with his friend Kiefer, the Prince of Estard. Pilchard Bay and Estard are located on a small island surrounded by nothing but endless ocean. It’s the only island on the map. However, you and your royal friend believe that there’s more to the world. Civilization simply cannot just consist of a fishing village and a castle town. Joined by the mayor of Pilchard Bay’s daughter Maribel, the three friends discover a hidden shrine with mysterious pillars. The pillars allow them to place fragments from ancient times on them. They complete a pillar and get transported to another world. This might be the adventure that Auster and Kiefer have been yearning for.

The truth is the three friends transport to the past version of their world. Upon finishing their quest in the past, they come back to the present to see that a new landmass has taken shape. This is the crux of Dragon Quest VII: gather ancient fragments, place them in the appropriate pillars, journey to the past, solve any issues in the past, and come back to the present to see how you changed your world. It’s a simple but amazingly effective formula. Your team will travel through a vast array of locations filled with their own unique cultures and histories. When you return to see how the new location fares in the present, you get the opportunity to continue your explorations. It cumulates into a massive game with a level of world building tantamount to Falcom’s Trails series. Unfortunately, that world building leads to copious backtracking and bloated events. Dragon Quest VII’s story loves to be extra; everyone involved in every story event has a lot to say. It can get redundant when you’re trying to move the story along. To add, many of the denizens in certain locations are written with forced accents. They’re not fun to read and a lack of voice acting means you’ll need extra patience for dissecting discussions. You can toss in some party chat if you want to spend even more time reading.

The story is epic for better or for worse. Otherwise, Dragon Quest VII is basic; very on brand for the series. Saving is only done at churches, as is learning how many experience points your party members need before gaining a level. Characters have limited inventory. A bag of holding quickly becomes cluttered with a bunch of key items and trinkets. Later in the game your party unlocks a vocation system where they can put on new outfits and take on a new role to learn a plethora of new spells and abilities. This is a magnificent feature that allows for a lot of customization, but you need to talk to a specific person at a specific place to not only change vocations, but also to learn how long it will take until the vocation becomes mastered. None of these are game breakers in any sense, but they add a lot of extra time an already long game. For a remaster, things should have been more streamlined.

Combat is another area that stays true to the Dragon Quest brand. It’s a standard, turn-based system where you simply select what you want your characters to do and watch the action unfold. Thanks to the 3DS version’s new look, you can watch your characters perform their actions and enjoy extra dazzling spells and skills. Dragon Quest VII isn’t as difficult or grind heavy as other games in the series. To add, encounters are no longer random. Unfortunately, most of the dungeons your party navigates feature tight corridors and hallways. You’ll end up getting into unwanted fights since every location is a tight squeeze. Like older games in the series that did have random battles, Dragon Quest VII’s combat can get very tedious very quickly. Naturally, running away hardly works. You’re better off finding your favorite ability or spell that targets entire groups of enemies so you can end a fight as quickly as possible. Combat isn’t bad, but it’s nothing you haven’t seen before.

Still, seeing your team act against an impressive variety of enemies is fun to behold. The move from 2D sprites to 3D models was a good choice. I’ll always prefer 2D over 3D, but I can appreciate all the care given to this remaster. The game always looks beautiful. Conversely, the music a different story. Dragon Quest has never been known to have epic soundtracks. Dragon Quest VII takes that to a new level. Except for the boss theme, I can’t recall a single track. The same sound effects used from Dragon Quests of yesteryear for attacks, spells, victory and so on are in full form.

Dragon Quest VII is packed to the gills with extra content. There are casinos, monster vocations, a ranch where you can send stray monsters, a town you can build, 3DS Street Pass features, and much more. It’s no wonder that gamers can clock over 100 hours of game time. As for me, I managed to finish the game in just under 70 hours. That time included extra vocation grinding and a few side quests. Even if you plan to do the bare minimum, you’ll still have a massive game on your hands. It’s impressive how much content the developers packed into the tiny 3DS cart. There are story moments and areas that will outstay their welcome. But, on the whole, the game’s formula of discovering new location upon new location keeps the momentum going until the end. Don’t go into Dragon Quest VII if you want a quick RPG. This is a long game that takes its sweet time reaching the conclusion. The journey to said conclusion is worth seeing whether you’re new to the franchise or a longtime fan. With a new look and a quicker introduction, it’s easy to recommend the 3DS version over the original PlayStation version.

Overall, 8/10: Dragon Quest VII: Fragments of the Forgotten Past takes you on a larger-than-life journey with an endearing cast, multiple customization options and plenty of extras. Those that wish to do it all will need to buckle down for a campaign that will last weeks.