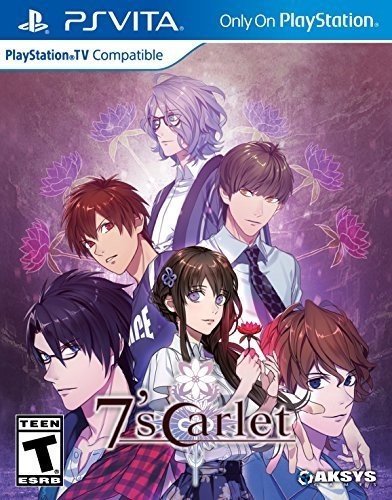 I’m surprised with the amount of visual novels that I have gone through this year. Each time I finish one, I feel like I should hold off on starting another. It’s easy to get burned out on these. But, it’s hard to find a genre that can tell such interesting stories with such believable characters. Mystery, romance, suspense, comedy, tragedy…all of these themes have appeared in visual novels. The one in review is no different. But, 7’Scarlet has something special that makes it stand out: pacing. Out of all of the visual novels I have played, 7’Scarlet is the best. I’d go as far to say that it’s possibly one of the best games available on the PlayStation Vita because it’s tightly paced and is aware that these games can be time sinks.

7’Scarlet puts you in the role of Ichiko Hanamaki. A year ago, Ichiko’s older brother disappeared while visiting the town of Okunezato. Now that summer vacation has started, Ichiko and her friend Hino Kagutsuchi have decided to head to this small, mysterious town. They learn of a group of students interested in the supernatural called the Okunezato Occult Club. With their help, Ichiko hopes to find out what happened to her brother.

Not that it should surprise anyone, but the story in 7’Scarlet is wonderful. You’ll be cheering for Ichiko the moment you learn of her ordeal. While the goal is to find her brother, Ichiko will unravel the mysteries of Okunezato, defend herself from potential stalkers, and, of course, find some romance along the way. Near the early parts of the game, Ichiko can start building a friendship with one of many handsome men. After a certain point, that friendship will turn to romance if the right choices are made. As usual, game play is very hands-off. You’ll be spending the majority of your time reading. During some moments, you can select one of multiple dialogue choices to build a relationship with one of the game’s men. 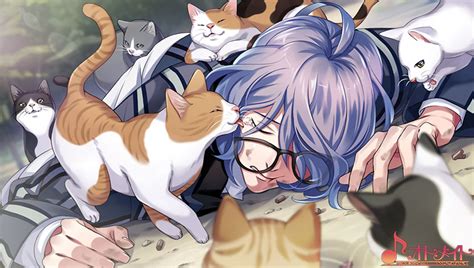 Toa’s path is one of the more endearing ones.

And, you’re probably thinking, “So what? This is SOP for visual novels.” That’s true, but like I mentioned earlier, 7’Scarlet moves at a brisk, tight pace. There is no fluff, filler, or fat. After going through the overly thorough Muv-Luv Unlimited or the technical Nurse Love Addiction, 7’Scarlet is like a breath of fresh air. Even if you don’t skip text, you can finish two arcs in a day. The more arcs you finish, the more secrets you uncover. This is a visual novel benefits from multiple plays.

7’Scarlet is a beautiful looking game. The backgrounds are bright and colorful or drab and ominous. They capture the small town feeling that the developers were going for. Many of the backgrounds have activity in the background such as moving waterfalls or breezy clouds. Real life footage was used for some of the game’s movies, which was a nice touch. Character art is equally lovely. Each character has a unique look that helps reflect their personality. CGs are shown during the game’s more noteworthy events, and some of them are full of feels. Since Ichiko is so likable, seeing her so happy feels like a blessing. 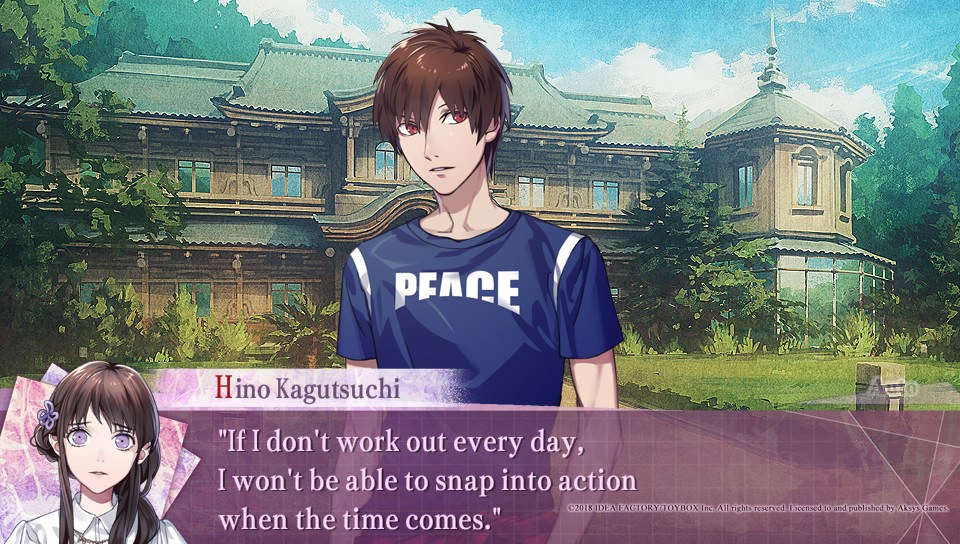 Foreshadowing? Play and find out!

Aside from Ichiko, every character in the game is fully voiced in Japanese. This was the right choice since the game takes place in Japan. The music is the only aspect of the game that didn’t keep up with the rest of the greatness. While the tunes aren’t bad, they’re forgettable. It’s easy to drown it out as background noise. But, that’s the most minor of nitpicks.

While going through the game once won’t take long, those that wish to see it all are only looking at 10 to 15 hours of reading time. Various options can add or subtract from that total, but this is still a short game as far as visual novels are concerned. It’s for this reason that I recommend 7’Scarlet to a variety of gamers. If you like visual novels, then you’ll like 7’Scarlet. If you are interested in visual novels, then this is an excellent starting point. If you enjoy the mysteries of the occult, then 7’Scarlet’s themes will provide you with plenty of intrigue. As you can see, I’m very pleased with this game. I was worried that moving from one visual novel to the next would cause some burn out, but I was wrong. 7’Scarlet delivered a fantastic experience and, hopefully, other visual novels will follow its example.

Overall, 10/10 – The perfect visual novel? I think so. 7’Scarlet does so many things right for the genre while delivering a gripping narrative.