Castlevania: The Dracula X Chronicles features a remake, an original, and a classic all rolled into one. 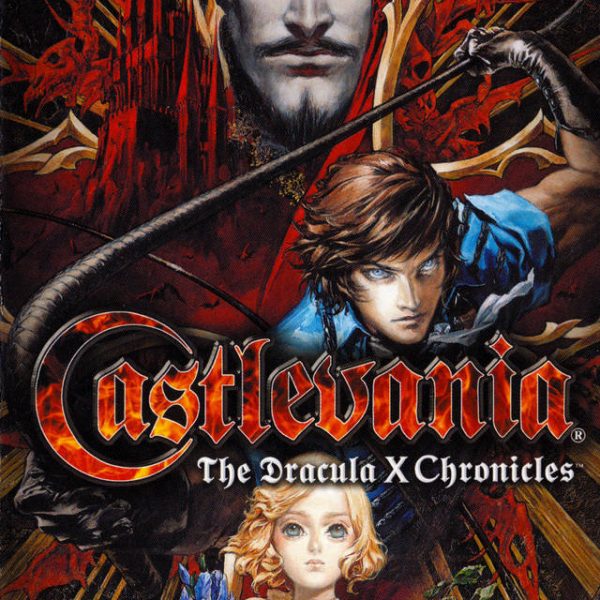 Author’s Note: This review was originally published on November 12th, 2008. Like other reviews of the time, it features “witty” taglines that designate each section.

To my knowledge, Castlevania: Rondo of Blood was the only game in the series never to make it over to the United States, at least until now. Thanks to the geniuses at Konami, Americans are finally able to play a remade version of a Japanese favorite entitled Castlevania: The Dracula X Chronicles. Furthermore, it is on a system that can clearly handle the upgraded graphics, music, and bonuses. Yes, that’s right: the PSP. The owners of this portable power-house, Castlevania fans, and all in-between should drop whatever game they are playing now and go to the nearest game store in order to pick up Castlevania: The Dracula X Chronicles.

Richter is Right!
The days of peace and prosperity have been enjoyed by those living in Europe. However, some people grew tired of the peace and decided to become all-powerful. An alliance of men shrouded in dark robes performed an unholy ritual that summoned Count Dracula back from the darkness from whence he came. A dark priest named Shaft bowed down to his new master in order to obtain absolute magical power. Furthermore, Castlevania has returned, and the castle’s ruler wants nothing more than the destruction of man. Only someone of Belmont lineage will be able to stop the vile master of darkness in order to bring peace back to the country. This person is Richter Belmont. With a whip in hand, Belmont blood in his veins, and justice in his heart, Richter will stop at nothing at saving the world and fulfilling the Belmont legacy.

If you are like me, you never had the chance to check out Rondo of Blood. Despite this fact, most of you will have encountered Richter Belmont at one point. He was the character you controlled in Castlevania: Symphony of the Night at the start of a new file, and he was also in Castlevania: Portrait of Ruin as a bonus character. Regardless, we now get to see the most exposure for Richter. Joining him is his cousin, Maria Renard. Again, we have seen Maria in Symphony of the Night and Portrait of Ruin, but only as a side or bonus character, respectively. Now, she is fully playable and ready for action. With two characters and one goal, it is clear that Dracula will have his work cut out for him in this classic plot of good versus evil. Along the way to victory, Richter will encounter maidens that can help him in his quest. Dracula does not stand a chance! Or does he?

A New Look at Old Game Play.
Most of the Castlevania followers have gotten used to the free-roaming Castlevania in which you are able to journey through the whole castle, hunt down key items, and travel from various places via teleportation spots. In Dracula X, you get back to basics. Instead of a large castle, you have stages that each have a boss at the end of them. Finish one stage, and you can move to the next stage. While there are secret stages and items to unlock, the majority of the game has you fighting off monsters, jumping over bottomless pits, and using all of you old-school action know-how to emerge victorious. Instead of having hit-points, Richter and Maria have a life bar. There are no potions, no self-restoring save locations, and no recovery springs. Instead, you have to find food hidden in torches or walls to restore your health. Enemies can pack quite a punch, so those who are used to a cake-walk will be in for a real surprise. The challenge will be a welcome to some, but others will frown upon the difficulty. I enjoyed the challenge, but there were times I was frustrated at the high damage caused by something as lame as a skeleton, a crow, or a flea man. Because you have no armor or weapons to equip, you are left with relying on dodging and attacking at just the right time. And, that’s just for the regular enemies!

Boss battles are truly challenging. If you fail to recognize the pattern of attacks of some of your foes, you might as well get ready to hit the continue option during another game over screen. Boss fights can be brutal. However, they can also be rewarding when you get the hang of there attack methods. Those looking for a real challenge will be happy to find that Boss Rush mode is back, and more difficult than ever.

Depending on the character, Richter or Maria, the person you control can do various things. Richter has the whip, thus his strength and range of attacks are powerful. He can also perform a back flip, but getting the hang of it can be troublesome. Maria can double-jump, slide, and perform a devastating shadow attack. She fights with her animal friends. However, compared to Ricther, Maria takes more damage and goes further after being hit. Both characters have a variety of handy sub-items they can find, and they can perform a powerful item crush attack when they have enough hearts. Both characters have their strengths and weaknesses, which adds to a bunch of replay value for the many stages in this game. Despite the frustrations that come with the old-school game play, the game is fun from start to finish.

3D and 2D. Good and Bad.
Avid players of Rondo of Blood will notice that the graphics have been completely made over. For the most part, this was a good move. Richter, the bosses, the monsters, and the stages look fantastic. Maria? Well, she looks a little wacky. Her 3D make over could have looked much better. Also, Dracula could use a bit more polish. Regardless, the 3D upgrade looks great on the PSP. Despite the 3D change, the game still plays in 2D. You can only move left and right. There are no elevators, ladders, or back-rooms. All you have is good, old-fashioned 2D stages.

The Sound of the Classics.
Throughout the game, you can find song tracks that can be played from the main menu. Besides this perk, the music was remixed for the PSP sound system. Needless to say, the songs sound great. Some of the tunes you hear will surely bring back memories from older Castlevania games. Do I think the OST is worth hunting down? Well, yes and no. While the songs are great, there are only a few that have that special factor that makes them timeless.

Bonus Stages! Bonus Games!
Castlevania has 10 stages for you to play, but many of those stages have alternate routes to take. These not only lead you to fight new bosses, but they also unlock new stages. These new stages can hold new secrets. With all the routes to take, no two games can be the same if you desire. Another bonus is that you can unlock the original version of Rondo of Blood and play it from start to finish. This allows you to see the origins behind the remade PSP version. However, the biggest, grandest, and best bonus of all is the ability to unlock a full version of Symphony of the Night. Am I kidding you? No! Not only can you replay probably the best Castlevania of all time, but you get to see an upgraded script and play as Maria! This by itself is enough to make any Castlevania fan squeal in delight. I know I did!

A Steal. For Real.
How can you not go out and buy this game after all that I talked about? Sure, some of the graphics look a bit off, and the game play can frustrate even veteran gamers. However, when you figure that you have wonderful things to unlock, as well as a game never before released in America to play, you know you got a winner. Castlevania: The Dracula X Chronicles combines everything any Castlevania fan could ask for. A remake, an original, and a classic merge together to form one of the greatest Castlevania titles, as well as one of the greatest PSP titles.