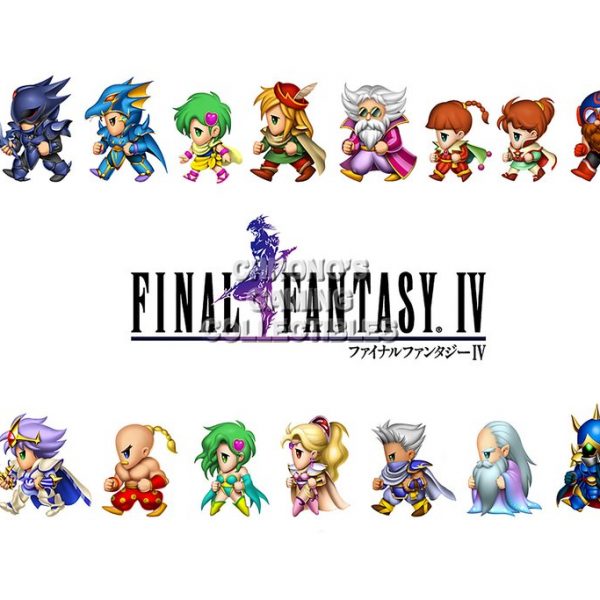 Author’s Note: This review was originally posted on March 21st, 2004. I remember getting annoyed by all of the gamers claiming that older Squaresoft games weren’t worthy of playing. This was my “response” to them. Enjoy!

I still can’t decide. Is this my favorite Final Fantasy, or is FF IX the winner of that title? Bah…no big deal. Final Fantasy IV came out in the United States back when I was but a wee lad, I think at the age of 8, as Final Fantasy II. That was a time when fighting games were the only games in my life. Never have I heard of RPGs, actually. Well, at my friend’s house I saw him play it and I was dazed and confused. Still, it was there I saw cool characters, and great graphics. I also met Rydia, who is the most fabulous green haired chick to date! Two years later, after I received my first RPG, I was hooked onto the genre. In fact, I still am. During those years of SNES being the fabulous system, RPGs were pretty few and far between in America, at least I thought so. When I finally obtained a copy of FFII, I was in gaming bliss, as I thought I would be.

Later in RPG world, I learned that FFII was horribly translated, and was actually FFIV! Well, crap…I thought. The game I played, I learned, was missing tons of elements in it. Luckily, Square released Final Fantasy Chronicles. The first game in the set was FFIV! So exciting! While I never got the chance to play the version on a Super Nintendo, I will still say that this game is fabulous. Call me old-fashioned, but they just don’t games like this anymore! For it’s time, FFIV had it all. For this time, FFIV still has it all!

Story: 8/10
The story starts off with Dark Knight Cecil returning to Castle Baron. The captain of the air force Red Wings, Cecil begins to question the latest turn of events that have occurred. His king has been ordering him around to find the elemental crystals, killing all those who are in his way. Not only that, but monsters are appearing all over the world. Obviously, something is amiss. Cecil decides to ask his king what has been going on. He gets banned from the kingdom as a result, along with his best friend and mighty dragoon, Kain. Together, they embark on a journey, full of peril that will take them to the moon and back. The journey will be one of danger, love, and self-discovery.

Twists, tragedy, betrayal, and all the other components of a good story are woven together in FFIV. Is the story too short? Yes, but with all of the side stories, you’ll still clock in plenty game time. Couple that with the much needed level building and you’re looking at 40 hours. Anyway, the story is great. Protecting crystals, as well as the damsel in distress, will keep you glued to your screen until you finish.

Gameplay: 10/10
Keeping it simple is great. That’s what FFIV does and a damn good job at it. You have your menu screen, which displays your characters and their current status. You can choose to use items, equip weapons and armor, use magic, change positions, and check how much money you have. This keeps the management of your characters simple enough for beginners. You can go into town, talk to the locals, find treausre, buy new equipment and items, and gather information that may be useful later. But don’t think that this is an easy game due to the out of battle controls being simplistic.

Battles: 10/10
The system for the battles is turn-based. Unlike the later installments of the series, you don’t see a little bar slowly charging up that indicates your turn. You can increase your speed with Haste and what not, but the charge bar is not displayed ever. Each character in the battles has his/her own set of skills. When their command menu pops up, you can choose an option for them. All of the characters can attack, defend, and use items. However, Kain will never cast a white magic spell and Edge will never get the power to Cover. Each character is unique, making the battles exciting. After a person does their action, he or she waits for their command menu to pop up again. You continue until all foes are defeated. Foes can attack you, even while you select an item or spell so you have to be quick and know your foes in order to turn out ok in the end. When you select magic, you have to wait for a certain amount of time before the spell is cast, unlike an attack which happens after you press the accept button. The more powerful the spell, the longer it will take to cast. All of this seems simple, and it is. The battles themselves can be quite tricky, however. In later dungeons, you may get an encounter every 5 or so steps. Annoying? To me, not really because I like the battles. Also, the enemies generally come in groups of three or more. Back to the thing about the later dungeons, you’ll be facing a couple of Zombie Dragons and an easy victory is pretty unrealistic. However, the proper amount of level building will surely help you with that. This game requires you to be at a significant level in order to emerge victorious during the especially tough boss battles. The last boss of this game is VERY, VERY hard. He is beatable, however, and you’ll be fine just as long as you prepare. In the end, the battles are great. You learn spells when you reach a certain level, you earn money and items from them…basic stuff. I like it that way.

Characters: 10/10
Cecil and his friends want to save the world from the very beginning of the game. And they aren’t doing it because they want fame, but because they care for one another and their world. They realize that they are the only ones who give hope to the people. Thus, these are some likeable characters. They develop well over the course of the game, and they each have a story to tell. They have history, motivation, all the great stuff that makes great characters. Unlike Cloud and Squall from the first two FFs for the Playstation, the leading protaganist is not reluctant.

Graphics: 10/10
Now, I’m not going to compare these old school graphics to the PS2 quality designs we see today. I’ll compare them to what was seen back then. The monsters you fight look well drawn, but they don’t move at all. When they attack, they simply flash and a character receives damage. That is perfectly fine with me. The spell affects are awesome. They are big, and you can FEEL the pain. The characters themselves, both in and out of battle, look great. They are very colorful and bright. In battle, they look even better, due to their size. The bakcgrounds are colorful too. Overall, well done for it’s time. Then again, I’ve seen some pretty bad games nowadays that had graphics worse than this.

Music and Sound: 9/10
The music is great. I have the OST, and I really enjoy popping it in and listening to it from start to finish. The sounds are a bit annoying, mainly because there are so few. It’s not bad though.

Replay Value: 2/10
After you beat it once, you’ll play it again after a long time because it’s a very linear story. I have played it about seven times from start to finish, but that’s because I really enjoy it. I don’t know how many times others will finish it. Just a matter of taste.

Difficulty: Hard
As I said in the battles part, you have to level up a lot in order to end up ok in the end. The game is tough, no bones about it. It’s not as hard as the very first Final Fantasy, but it’s still challenging.

Buy or Rent: Buy
Buy this classic. It’s a great game! If you can’t buy it, then DL it. Just make sure you have a legit copy of it. If that doesn’t work, then you can play it for the Playstation in Final Fantasy Chronicles (not to be confused with the crappy Game Cube game).

Before Squaresoft became Square Enix, and before the series turned into something many people consider negative, FFIV showed what a true RPG is all about. There is nothing fancy about it, but the story and fun will keep you playing until it’s over.