A new year at Al-Revis academy begins in Mana Khemia 2. 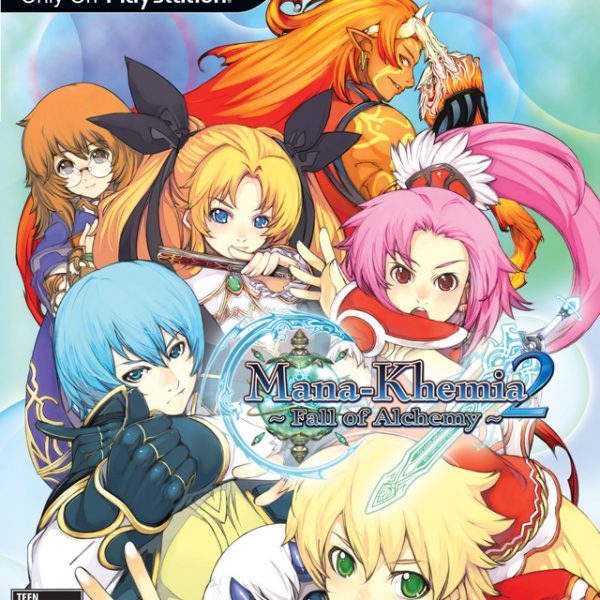 Mana Khemia was a fantastic title that did just about everything right. This RPG had fun battles, great item synthesis, characters that were memorable long after finishing the game and there were lots of ways to develop said characters. There were different endings, colorful visuals and a soundtrack that kept me humming along. Truthfully, I found it odd that Gust decided to make another Mana Khemia title. Gust couldn’t reach higher with a sequel since the first one was so lovely. On the other hand, I welcomed the idea of returning to Al-Revis Academy for more shenanigans. Mana Khemia 2: Fall of Alchemy is a fun title, but it’s not as epic as the first game. One of my biggest problems is that the characters aren’t likable; almost to the point of hatred.

Taking place years after the first game, Mana Khemia 2 begins with an introduction to the school and how it has started a financial decline. A new chairwoman named Marta has been brought on board to put Al-Revis back into a strong financial situation. Unfortunately, one of her first orders of business is to completely get rid of the alchemy classes after the current school year. Of course, the incoming students have their own share of problems aside from school life. At the start of a new game, you can select one of two main characters. Razeluxe Meitzen is a swordsman that grew up as a servant with his grandfather. The only reason he’s at Al-Revis is because his “master” Liliane Vehlendorf enrolled and wanted Raze to come with. She goes by Lily for short, and she has a major crush on young Raze. The other main character is Ulrika Mulberry. As a young girl, Ulrika received an egg that would eventually hatch a Mana from an old wizard. Ulrika is now at Al-Revis to learn more about Mana, alchemy and to get out of her smalltime, country town. Raze and Ulrika get different party members and their stories intertwine throughout the school year. However, both characters have different adventures. Raze’s story is about the declining rate of Mana and his past relationship with them. Ulrika’s story is about the history of alchemy and Mana. In order to see the full story, you need to play through the game with each MC.

This is actually one of my major issues with Mana Khemia 2. It’s not that I have an issue with going through the game again; the two character’s stories are different so that is not an issue. My problem is that the majority of the characters are not the least bit likable, which is a first for me in a Gust game. Aside from Raze, Lily and Puniyo it’s not fun getting to know the characters more than I need to. They range from boring to downright despicable. I finished my journey with Raze and if I do go through Ulrika’s story, I am confident I’ll be mashing the X button to keep things moving. This feeling also applies to the NPCs. Strangely, I don’t feel any animosity towards the villains. Instead, I would much rather fight against members of my party or those that consider themselves on the side of good. It feels like such a low blow because most of the characters in Mana Khemia were great.

Luckily, Mana Khemia 2 took some of the best game play aspects from the first game and either improved upon them or kept them the same. Mana Khemia 2’s story is told in chapters. At the start of a chapter, you have to perform assignments and earn a grade. If you perform poorly, it means you will have to complete more assignments. This is bad since it limits your Free Time, which is the only time you have to perform character quests and side-jobs. Completing character quests means you have the potential to unlock that character’s unique ending. Once Free Time is over, you will head to a story event that will advance the game and close the chapter.

Most of the assignments require you to craft items with Mana Khemia 2’s amazingly addictive alchemy system. You start by picking an item, picking the ingredients and then selecting a partner to help you. Different partners not only provide different perks to the finished product, but they might think of new items for you to create. As you add items to your cauldron, you will see a rotating wheel with different colors. These represent various elements. Matching like or opposite elements will raise or lower the item’s value. Different levels of value unlock different traits, but the item will still have the intended effect. As you craft more new items, chances are they will unlock on each character’s Growth Book. Instead of experience points, characters earn Advancement Points after battle. These are spent in order to raise stats, learn new skills, upgrade current skills and other benefits for battle. I really wish other games took a note from this sort of growth system because it prevents your characters from being too overpowered and it’s a very rewarding way to watch your characters grow. So, using alchemy to create new items is not only necessary for assignments and battle, they are important for making your characters grow.

School life in Mana Khemia 2 is fun, but the time spent in battle is just as enjoyable. For those that played the first Mana Khemia, they will be thrilled by the comfortably similar yet enticingly different combat. Raze and Ulrika are joined by characters that have their own unique sets of skills, as well as their strengths and weaknesses. Up to three characters can be in the front row and usually two characters will be in the back row. During certain story events, you might get a guest character that can also participate in battle. Battles begin when you run into a monster icon. If you match the face button that comes up, you will get the first strike. Unlike the cards displaying the participants in Mana Khemia, Mana Khemia 2 has everything in spheres that rotates clockwise. Your team can attack, use their skills, use items, defend or run away. Over time, new features will be added to the battle system that makes getting into the next encounter more fun. The first is the ability to have a member in the back row defend an attack from a member in the front. Similarly, when one of your vanguard members attacks, you can have someone in the back row perform an assist. Another feature is entering Unite Mode, which causes your enemies to take more damage. Performing the guard switches and the attack switches in Unite Mode lets you unleash powerful Variable Guards and Variable Strikes, respectively. Finally, you can unleash a deadly Finishing Strike when you have built up enough power in Unite Mode. Battling is a blast. Sure, entering a new dungeon means you can start gathering new materials and treasures, but the real joy is seeing the new monsters you can fight. When a battle ends, you will earn items, money and AP. You will earn better rewards depending on how quickly you finish a battle.

Another reason I enjoy battling so much is because the battle graphics are as crazy and fun as can be expected. Mana Khemia 2 has gorgeous 2D sprites, great character art, creative environments to explore and lots of flashy effects. Gust has never disappointed me when graphics are in question and Mana Khemia 2 is no different. As much as I enjoy the stunning 3D presentations from games like Atelier Shallie or Ar nosurge, something about the expressive 2D sprites in Mana Khemia 2 makes me prefer them. I do have one complaint, though: the opening movie isn’t animated. Instead, it looks like something Idea Factory would create. I also have a small issue with the music. While the soundtrack is hefty and has some catchy tracks, the campus music won’t have you whistling along like it did before. The voice acting can be either English or Japanese; whichever you like. For certain characters (Ulrika, Peperoni) the Japanese voice acting is preferred. For others, the English voice acting does a good job.

Like I mentioned, there are two characters to play in Mana Khemia 2. My time with Raze took me 30 hours to finish, and that was with doing all of the side-quests, character quests and making as many of the items as possible. By the time I was at the end of the journey, it became clear that finishing Ulrika’s side of the story would reveal the truth behind the villain’s intentions. Mana Khemia 2 lets you carry over all of your unused ingredients in a New Game Plus, so the thought of going at it again from a different point of view doesn’t seem bad in some regards. However, the thought of dealing with Ulrika and her awful posse makes me want to rip my hair out. Don’t misunderstand: Mana Khemia 2 is a fun game that I recommend to all RPG fans. It’s just that my biggest gripe with it is that the characters, which Gust usually executes so well, are so unlikable. If that bothers you, you might want to rethink picking up this game. For everyone else, Mana Khemia 2: Fall of Alchemy has something all RPG fans will enjoy: great customization, a copious amount of items to create and a battle system that gets better and better with age.