The Banner Saga is like The Oregon Trail without dysentry. 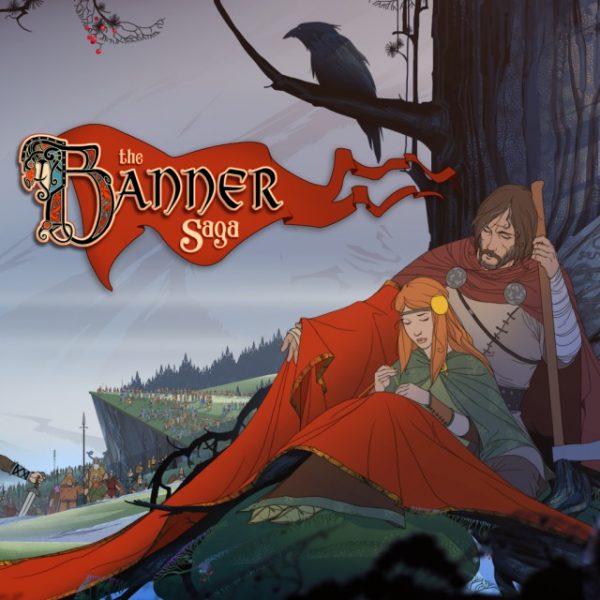 Vikings, sorcery, horned giants, and a sun that remains forevermore in the sky. These are some of the story elements in The Banner Saga, a strategy RPG by Stoic Studio and published by Versus Evil. Available as part of The Banner Saga Trilogy on the Nintendo Switch, I began the first entry with excitement. The promise of tactical battles combined with choose your own adventure books in which your choices make or break your fate sounded like a unique formula. All this set in a bleak, ambient Nordic world. The game ended up being a terrible experience tantamount to the many tragedies that the heroes in this game experienced. In fact, it might be one of the worst modern gaming experiences in recent memory. I have no intention of ever seeing the trilogy to the end because the first game made a terrible first impression.

The Banner Saga isn’t a total bust. The only redeeming feature is its story. Indeed, this is a situation in which the story should have been presented as a book or a film. It takes place in a world of endless winter where the sun remains stuck in the sky. This world is populated by humans, horned giants called Varl that cohabitate peacefully with the humans, and the Dredge. The Dredge are metallic-looking monsters that were thought to be extinct. Now, they’re back and eager for human and Varl bloodshed. Two caravans of heroes are at the center of the chaos. The first is led by Vognir, a Varl tasked with escorting a spoiled prince named Ludin to the town of Arberrang. The other caravan is lead by a hunter named Rook. With his daughter Alette, Rook and his friends are on the lam from the Dredge. Their village was destroyed, and the survivors need shelter. The story is filled with sadness and tragedy. Hope continues to get dangled in front of both caravans only to get snatched away. It makes for a compelling and intriguing narrative in an atmospheric setting. Everything is presented with fantastic writing and dialogue that flows naturally. By the end of the tale, you’ll feel as though you know most of the characters personally.

That’s where the praise ends from this reviewer. Looking at things from a high level, The Banner Saga is an average looking game. Character art looks like it belongs in a Sunday School Bible cartoon. The colors and costumes work for the game’s dismal setting, but the actual designs were where I had issue. The backgrounds and set pieces were pleasant but repetitive. The Dredge don’t look as intimidating as the story would have you believe. Finally, the music is forgettable. Voice acting is sparse, but it works. It’s mostly shouts and grunts during battle.

The Banner Saga’s biggest issue is the gameplay. If you take everything wrong with The Oregon Trail and Shining Force, then you have the foundation for The Banner Saga. The game is divided into chapters. Each chapter is devoted to one of the two heroes (Rook or Vognir) as they lead their caravans. Eventually, both parties meet at the end. Traveling is very hands off. As you watch the caravans travel, the game will pause to present you with a situation and various choices. Your choices will always have some sort of impact so it’s important to pick carefully. Usually, at least in my case, the choices I made resulted in a loss of Morale. Lower Morale means lower combat performance. Morale will constantly go down due to a dwindling resource: Supplies. Supplies decrease for each passing day on the road. And again, the wrong choices could mean even less supplies. If Supplies are emptied, then members of your caravan will die.

Even if their results aren’t ideal, the choices you get to make add flare and extra bits of character development to the otherwise hands-off traveling. As the caravans continue their journey, the main characters will have to participate in grid based strategic combat against the Dredge or bandits. Combat is messy and unbalanced. Each character has their own specialty and be upgraded to your liking, but that’s where the fun stops. Taking a cue from Resonance of Fate, every battle participant has two sources of hit points: Armor (blue) and Strength (red). Lowering the Armor means dealing more damage to Strength. Most of the time you’re fighting the metallic Dredge. So, battles become tiring affairs since you need to lower their Armor in hopes of doing any sort of damage to their Strength. It’s tedious. There are other issues like enemies jumping the turn order for no reason, not being able to cancel your movement, and having to rest in place to restore Willpower. Willpower is necessary for executing a character’s special attack. Remember the Morale I mentioned before? Well, the lower the Morale then the lower your team’s starting Willpower.

As characters kill enemies, they get the opportunity to rank up and earn another resource: Renown. Renown is also rewarded upon a battle’s completion. This is the game’s biggest issue. Renown serves as currency and a source of power. If you want to buy more Supplies, you need to spend Renown. Want some new accessories to give your characters a muchly needed fighting chance? Spend Renown. Even being able to perform a Rank Up requires Renown. Each Rank Up requires more and more of this precious resource. There’s a limited number of story battles which means there’s a limited amount of Renown. Yes, there’s a training option but that doesn’t reward you with anything.

It’s just one bad idea on top of another in The Banner Saga. It’s like the developers intentionally wanted to make the game unenjoyable when you weren’t immersed in the story. Mercifully, the game is short. You can turn the battle difficulty to Easy and make it your way to the credits in less than 15 hours. I was told that some improvements were made in the game’s follow-ups, but this first entry was too poor of an experience for me to consider them. As wonderful as the story was, The Banner Saga was another example of a game that shouldn’t have been a game in the first place. A series of novels or a movie could have given The Banner Saga’s narrative the right light to shine in. Instead, we have a clunky strategy RPG filled with frustrating resource management and a lack of balance.

Overall, 3/10: The Banner Saga is not recommended even if you find the story compelling. Find another method to see how the plot develops so you don’t have to play it.