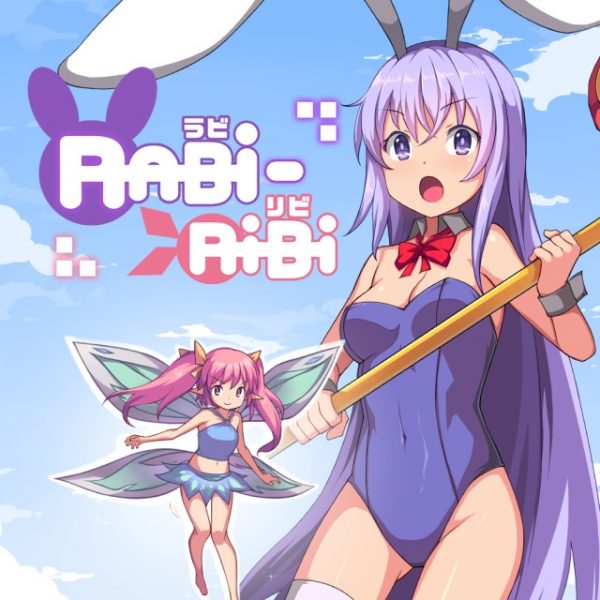 Rabi-Ribi follows the adage of never judging a book by its cover. Despite the scintillatingly cute cover art and colorful world filled with beautiful anime girls, the game is a high-speed action game that combines elements of bullet hells and Metroidvanias into an intense package. I consider myself to good at video games and Rabi-Ribi still challenged my reflexes and patience. It’s a fun game that I recommend to nearly everyone, but don’t let all that cuteness deceive you.

In Rabi-Ribi, you take control of Erina. Erina used to be a bunny living a bunny’s life; not having a care in the world. One day, her life takes a strange turn: she becomes a human wearing a traditional Japanese bunny-girl costume complete with floppy ears and a tail. Things get stranger when she finds herself in a new world filled magic and technology. Erina bipedals along and meets an adorable fairy named Ribbon. Ribbon is on a mission to find her lost fairy friends. Together, Erina and Ribbon venture through their bizarre surroundings as they attempt to restore Erina to her original form. Rabi-Ribi’s tale is as precious as they come. There’s a surprising amount of dialogue; watching Erina and Ribbon interact with one another and the lovely ladies they meet serves as a nice break from the action. The story sequences can be skipped with the push of a button if you want to get back to dodging bullets and taking down foes.

Indeed, this is the crux of Rabi-Ribi. You take control of Erina as she jumps, dodges, glides, smashes, and shoots her way through a multitude of tricky stages filled with traps, enemies, spikes, and tough bosses. The game is divided into chapters. Each new chapter introduces a new area where Erina and Ribbon need to explore, but as is typical with Metroidvanias, you’re able to head to anywhere you want if you have the right abilities. In fact, the game has been designed for advanced players to go through the entire game without a certain items and/or playing certain areas out of sequence. Doing so is only for advanced players, but the option is there. The world of Rabi-Ribi has plenty of secrets to uncover such as hidden paths, extra power ups and upgrades, new items, and more. A town (aptly called Rabi Rabi Town) serves as a hub where you can quick jump to certain areas, talk to the locals and purchase additional upgrades.

Most of your time spent with Erina and Ribbon will be action packed requiring precision and snappy reflexes. Even with all the power ups at your disposal, Rabi-Ribi is a challenging title. The cute and cuddly looking enemies want nothing more than to make Erina’s journey tough. Erina’s weapon of choice is a Piko Hammer. She can perform a quick combo with it that requires cooldown time; button mashing won’t work here. Like Nier: Automata, you can hold down another button and let Ribbon unleash magical bullets. However, magical power is limited. This means that you can’t rely on just Erina or just Ribbon. There’s a balancing act that requires consideration. This can make some of the many bosses exceptionally challenging. While Erina dodges more lasers than a lightshow, it can get frustrating not having the ability to hit back. Through the course of the game you can acquire different types of bullets. One of Erina’s most useful items is the Bunny Amulet. This lets Erina reset the magic meter and activate devastating attacks. Naturally, using the Bunny Amulet is finite. Gameplay is a symbiotic phenomenon that is just shy of greatness. There are times things just feel unfair and there’s really nothing Erina can do other than take the brunt of damage.

Rabi-Ribi is one of the prettiest games that features retro styled graphics. It combines the idea of 2D sprites and pixels of yesteryear with smooth animations that modern consoles can handle. All of this is executed it beautifully. Dialogue sequences are filled with character portraits to add extra flavor. The world is filled with pops of color and plenty of cheer. My favorite aspect of Rabi-Ribi is the music. It’s a collection of super upbeat, techno infused, head bopping tracks that mesh perfectly with the game’s tone. There isn’t any voice acting but I think the game is better for it.

Along with the main story, there’s a Boss Rush Mode and a Speedrun Mode. Multiple difficulty settings and scaling boss fight options give players incentive to go through the game again and again. Those that play on a system with achievements will be pushed to the limit as they endure challenges such as not touching a single spike or achieving a perfect score against every boss. There’s a lot to appreciate in Rabi-Ribi. Despite its challenges there’s a solid action game beneath the cute exterior. Even when the game does something to tick you off, it’s hard to stay mad at it for long. It’s not every day you get to control an adorable bunny girl/fairy duo in a world dominated by lovely ladies.

Overall, 7/10: Rabi-Ribi has bunnies and bullets aplenty. It has some rough edges, but it’s still a game worth experiencing.