Get those claws out and horns up. Bloody Roar 3. 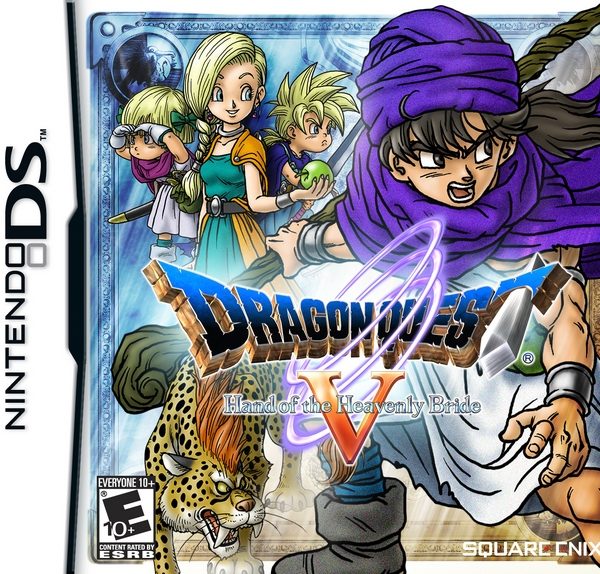 Dragon Quest V: Hand of the Heavenly Bride is often considered a favorite by longtime fans of the series. Before starting it, I was a bit worried that all of the hype surrounding it would effect my expectations. It’s worth noting that it was the last game in the main series that I finished. Now that I’ve had exposure to all of the entries, it’s easy to see why it’s held in such high regard. Much of it is the is the same that we’ve come to expect, but there’s some key stuff that sets it apart. Is it my favorite? No, that honor still goes to IV. But, it’s easy for me to see why the game has such a fanbase and so much adoration. If you’re a fan of the series, then I highly recommend playing this one if you haven’t. If you’re new to the series, then I suggest playing something else only because the game does so much right. In a twisted way, it might negatively impact your impression of other entries.

In Dragon Quest V, you once again take control of a silent protagonist that has been blessed by the Goddess of Zenithia. The game starts with your hero as a young, innocent boy with the purest of hearts. You and your father, Pankraz, travel the world undertaking various odd jobs and requests from the townspeople. Pankraz’s reputation is known throughout the land. He’s a mighty warrior, a talented magician, and a reliable worker. As his son, you enjoy spending time with your old man and learning more about the world on your travels. Sadly, and as we all know, childhood is ephemeral. One fateful encounter will reshape the way the hero views the world. But at the same time, it will be the advent of his own, personal quest. It doesn’t take long for Dragon Quest V to get really bleak, really quickly. The narrative is one of the best in the series. The addition of the Party Chat feature adds to it since you can continue to learn more about your party members and how they feel about the current situations. But, as usual, a chunk of the writing feels overly campy and silly. It’s hard to take certain moments seriously when the characters involved are written with silly accents or indecipherable lingo. It doesn’t take too much impact away from everything but it can be an immersion killer.

Just like Chapters of the Chosen, Hand of the Heavenly Bride looks beautiful with the best, brightest 2D presentation available. I never grew tired of looking at all of the colorful characters and locations – and this is coming from someone that doesn’t like Akira Toriyama’s art style. The music is pleasant; inoffensive. I can’t remember any of the tunes, but I never opted to turn the volume down during the adventure, either. The presentation is par for the course for the series so none of this should come as a surprise.

Anyone familiar with an RPG will be able to pick up Dragon Quest V with zero hassle. Your hero and his compadres move from town to town, dungeon to dungeon, completing quests along the way to move the plot forward. Towns are filled with chatty locals, shops, and sometimes mini-games with nice prizes. One thing I really liked about this entry was that money was rarely a problem when it came to affording the latest and greatest gear. Either the prices were more reasonable or the money drops from enemies got enhanced. I’m not sure what happened, but it was a nice surprise for a series that is usually stingy. Another nice surprise was not needing too much guidance when it came to figuring out where to go next. Dragon Quest has a tendency to be obtuse. Things feel more streamlined in Hand of the Heavenly Bride. There’s still a big world to explore, but you won’t be wandering aimlessly hoping to wind up in the right area.

Speaking of wandering, you’ll be doing a lot of it on the world map and in dungeons. Similar to how forgiving the shops are, the layouts of the various monster-infested areas feel a lot easier to navigate. Winding roads and holes are everywhere, but it never feels like you’re lost. During this traveling, monsters of various shapes and sizes will be eager to pounce. Combat is typical Dragon Quest stuff. You input commands for up to four party members. Your side and the enemy side exchange blows until one side falls. It’s typical, but Dragon Quest V has one thing that separates itself from other series: monster recruitment.

Most of the monsters you randomly face during your travels have a low percentage of joining your party after battle. It’s exciting seeing an enemy you just toppled pick itself up and offer to join the hero and his friends. Every monster has its own unique abilities, too. But, there are two downsides to all this. The first is that the encounter rate has been increased to even higher than in other entries. The second is that there’s a high chance your desired monster will never, ever join you. No matter how many times you fight them, it seems the player needs to have the best luck in the world to get that one, specific monster. Supposedly, the more you kill an enemy type and the order you defeat them has some effect on them joining. I’m not sure if this is true because monsters would join me at the most random, unexpected times. For completionists that have to “catch ’em all” you’ll be turning a 40 hour campaign into a 400 hour campaign.

Luckily for me, I was able to get by with the monsters that did decide join. For about 3/4 of the campaign I never found myself in a difficult situation. Eventually, my party of story-related characters was more than enough to tackle the challenges near the end of the game. This brings me to one final perk of Dragon Quest V: replay value. Without giving too much away, the hero is given a choice of three lovely ladies to take his hand in marriage. This choice doesn’t impact the overall narrative. It does, however, effect who later joins the quest and the gallons of Party Chat dialogue. Due to this, I’m pretty excited to play through the game again after a few years. Still, I was happy to see the credits by the time I finished the last bits of questing. This is still a Dragon Quest game so the usual issues with it are in full force: inventory management, church service shenanigans, etc. Despite this, it was one of the most fun games in the series I played. I’m glad I saved it for last because it was the perfect cherry on top of the series. Dragon Quest V: Hand of the Heavenly Bride really feels like a pinnacle of the series. It doesn’t do anything grandiose to separate itself from the other entries from a gameplay perspective, but it’s captivating story and unique qualities make it shine.

Overall, 8/10: Dragon Quest V: Hand of the Heavenly Bride might have a familiar vibe, but the world, story, and the potential for a massive party of monsters make it one of the best entries.