Growing up, I was always fascinated by the lore of the zodiac and horoscopes. It was fun opening up the paper and reading what was in store. Of course I never believed it, but it was fun to think about it; I just liked how each day brought something different. “Different” applies to another aspect of the zodiac. I’m talking about Final Fantasy XII: The Zodiac. An enhanced version of the PlayStation 2 hit, The Zodiac Age mixes up the formula and adds some quality of life features that make it very…well…different from the original. All of the different ideas, both new and old, make The Zodiac Age one-of-a-kind in a series that thrives on change. I didn’t care for the original, and unfortunately, I didn’t care The Zodiac Age, either. But, I neither recommend it or discourage it. It’s a game you’ll have to play for yourself to see if it’s worth the potential 100 hours of time.

The game begins with the wedding of Princess Ashe and Prince Rasler in Dalmasca. The happiness ends when the country of Archadia attacks both Nabradia and Dalmasca. Sadly, Prince Rasler gets hit by a stray arrow and becomes one of the battle’s casualties. The king of Dalmasca is sentenced to death, but one of Dalmasca’s promising soldiers and a band of rebels make a last ditch effort to rescue him.

Final Fantasy XII’s story seems like it would have that political intrigue you loved from Tactics. At first, it shows some promise. There’s politics, but there’s mysticism, ancient technology, and other fantastical themes thrown in. The problem with it can be summed up in one word: pacing. You’ll go hours and hours between story events that it’ll become easy to forget why the Hell you’re adventuring in the first place. Luckily, the game features a great cast of characters. The leading man, Vaan, does a good job of personifying the player since he’ll be exploring this version of Ivalice for the first time. My favorite character is Basch, a knight captain that has a heavy burden placed upon him. I wanted to route for the heroes and take down the villains, but the slow pace of the story wasn’t enough to keep me interested. 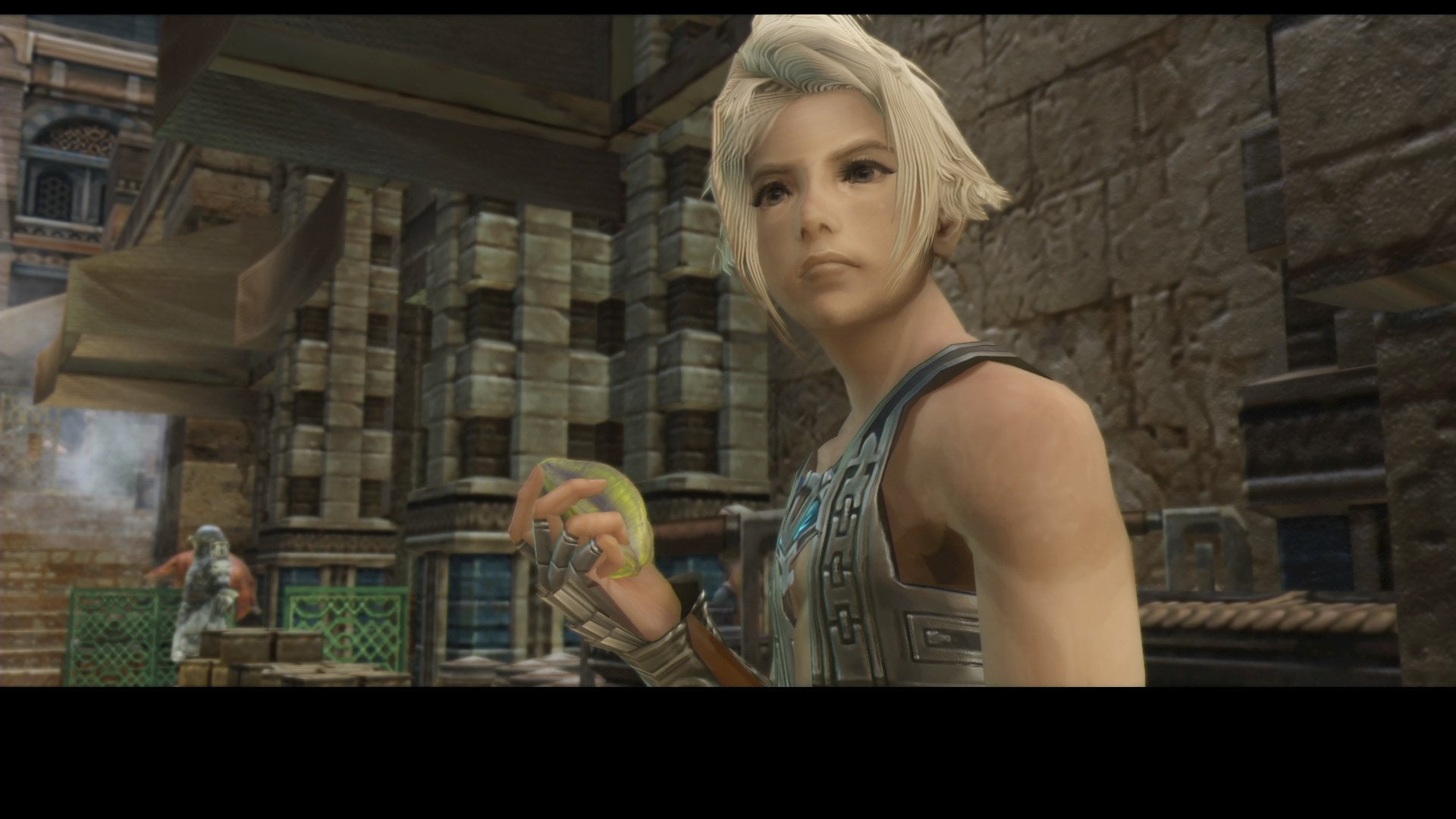 With his perfectly quaffed hair and tanned skin, it’s hard to believe that Vaan has to do the whole “save the world” thing.

Before moving on to gameplay, I want to talk about game’s beautiful presentation and soundtrack. I don’t like “Furry Ivalice” but I won’t deny its beauty. Vaan and his friends will explore massive, gorgeous locations that are filled with life and personality. Towns are bustling. Forests are serene. Deserts are intimidating. The list goes on. Naturally, Square’s character graphics are perfection. Even if you aren’t watching one of the many FMVs, every living creature in The Zodiac Age comes to life in this HD version. The music comes from Hitoshi Sakimoto, one of my favorite composers. As expected, Sakimoto delivers. The atmosphere of Ivalice is enhanced thanks to this soundtrack. There’s a grandness to the music that you don’t find in other Final Fantasy titles. Voice acting is mostly solid. Ashe will get random cases of “Madonna” and slip into an English accent. Some of the others love to ham it up for the camera. But, those are minor nitpicks.

So. The gameplay. Get comfortable because there’s a lot to talk  about. One of the most important and noteworthy features in Final Fantasy XII: The Zodiac Age is the job system. Your six teammates can be assigned two permanent jobs. Each job has a unique License Board that allows your characters to grow in terms of stat boosts, what pieces of equipment they can equip, which spells they can use, and more. The jobs include classics such as the White Mage and Knight, as well as unique ones such as the Machinist and the Shikari. The purpose of this system was to make it so your teammates weren’t so “samey” like in the original version.

However, most gamers will encourage new players to choose two jobs that cover each other’s weaknesses. In previous Final Fantasy titles with a job system, I would have a dedicated magic user. So, I’d assign a character with White Mage and Time Mage. In The Zodiac Age, you’re better off pairing a magic heavy job with a physically oriented job. So, in essence, you’re once again creating a six person party of characters that are built the same way. Obviously there will be differences, but it feels like a cranked up version of the original.

Now, I feel the need to point out that there isn’t a right or wrong combination of jobs. You can do what you want and should be fine for the entirety of the game. However, the fact that you can’t change jobs plus the emphasis on building a character in which their two jobs make up for their shortcomings doesn’t do as much to separate The Zodiac Age from the original as one would think.

Once you pick your jobs, that’s it. There’s no going back.

One major thing I don’t like are the Gambits. Essentially, Gambits are “if/then statements” for your characters in battle. “If this happens, then that will happen.” They can be as straightforward as “If the party leader has less than 50% of their HP, then use a potion” to something much more random such as “If Fran has shell cast on her, then use a Remedy.” The purpose of Gambits are to make sure your allies stay alive and take down enemies all at once without having you input commands. The common argument I hear is that Gambits allow you to spend less time inputting command after command while the action plays out. That’s not entirely true. When you think about it, the time it takes to set up your Gambits fully so that your teammates don’t mess up takes just as long as putting in the commands manually.

Enemies are everywhere. When you see enemies on screen, you can run toward them or let them come to you. Either way, battles begin as your team draw their weapons. Pressing the A button freezes gameplay and brings up the command menu where you tell your party leader and the rest of the team what do. The usual stuff is there: attacking, casting magic, summoning an Esper or using a special attack called a Quickening. Since Gambits can do just about all of the work for you, however, all you need to do is monitor your party’s health and the enemy’s health. If things aren’t looking good, then open the command menu and take care of it. Otherwise, the Gambits let the game play itself. It’s a different approach to one of the genre’s most important aspects: battles. Your team will spend 80% of time in combat, but you the player won’t be doing much during said 80%. 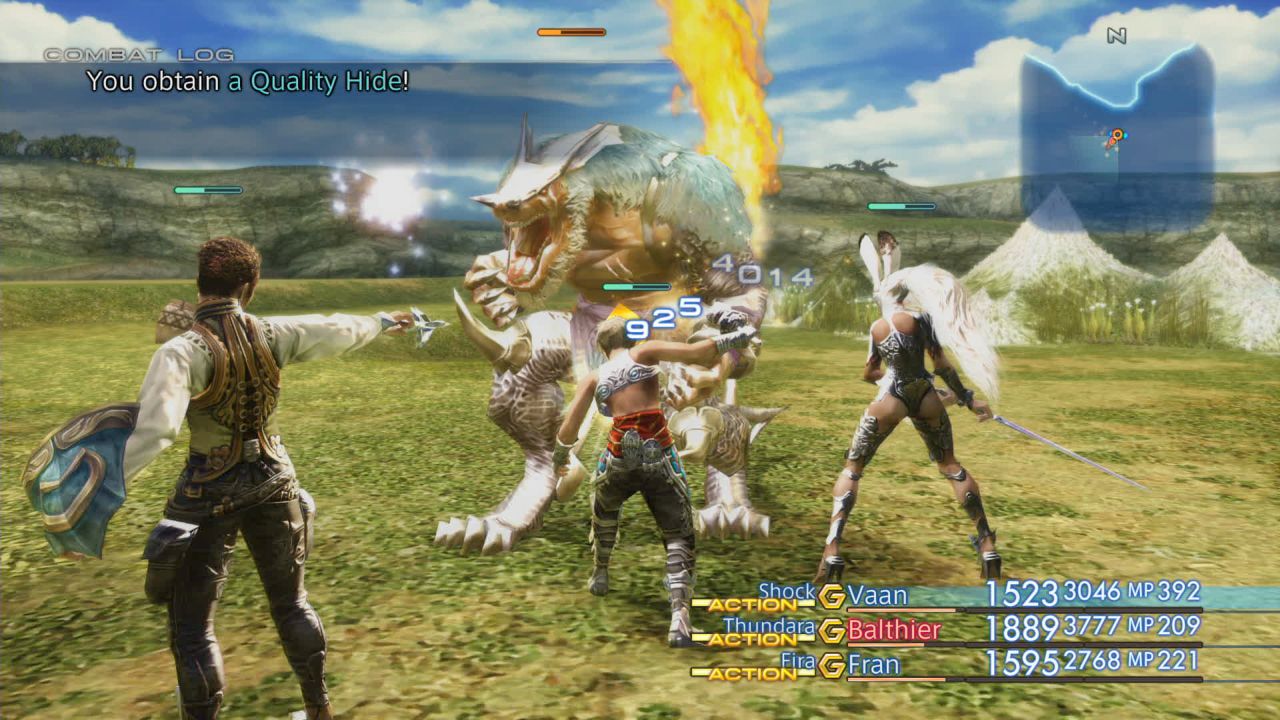 The screenshot makes combat look like an action-packed affair. It’s quite the opposite. Combat is very hands-off.

There are other little things that caused my time with Final Fantasy XII: The Zodiac Age to end about half through the game. One issue is money. Purchasing new gear that you used your hard earned License Points for is an expensive endeavor. It will be rare for your characters to have the most current stuff, whether it’s due to a lack of funds or a lack of LP. Another issue are bosses. These seem like the perfect place to really flex your Gambits, but all you need to do is use your current party’s Quickenings, swap out the party three characters and use theirs.

When all of these issues fully came together I got to a point where I realized I wasn’t having any fun. Instead of looking forward to the end of the work day where I could go home and play The Zodiac Age, I found myself looking through my backlog for something else to pop in. The Zodiac Age, even with its fast-forward options (2x and 4X) isn’t the Final Fantasy for me. Change has always been central in the series. Each entry has something unique to make it stand out. With Final Fantasy VII, you have the Materia. With Final Fantasy X, you have the Sphere Grid. Here, we have License Boards, Gambits, and a job system. Sadly, I didn’t care for any of them.

Final Fantasy XII on the PlayStation 2 was one of the few entries I never finished in this legendary series. When I first played it on the PlayStation 2, my biggest issue was with its slowness. Everything that you did, from walking, to battling, to using an item, to talking to an NPC and so on was a long, overdrawn production. The first thing I learned about getting added in The Zodiac Age were the speed-up options. The thought of that simple addition made me excited to finally give the game another chance. Maybe I could see it through to the end this time? Plus, with the Switch version’s portability, it seemed like the ideal version of the game.

Eventually, the honeymoon period with the ability to fast-forward wore off. Yes, this is the definitive version of Final Fantasy XII. Yes, there are some much needed quality of life enhancements. Yes, there is probably a damn good, well-crafted game somewhere beneath all of its layers. You just have to put the time in to look for them. This is one of those games that I recommend you see for yourself to determine whether or not its for you. The game is so different it needs its own classification and sub-genre.

Overall, 6.5/10 – Better than the original, but still a tough sell. At least, for me. In truth, Final Fantasy XII: The Zodiac Age is a game you have to see for yourself.