If you take one thing away from this review, let it be this: Octoapth Traveler is a fun game that is absolutely worth your time. There are some parts in this review that might say otherwise, but overall this is a well-crafted game that has provided me with over 70 hours of enjoyment. The thing is, Octopath Traveler feels like a game where its design and spirit are in severe conflict. The game looks like it has the spirit of an open-ended adventure that would let you progress and play as you like. But, in actuality, the game is designed to be played in a very specific and linear way that will railroad you for trying to think outside the box.

Octopath Traveler takes place on the continent of Orsterra. Eight individuals have decided to venture from their towns to explore the continent. An apothecary named Alfyn hopes to become more well-versed in his craft. A scholar named Cyrus is taking sabbatical to perform research on an old book. A huntress named H’aanit hopes to find her lost mentor. These and the rest of the characters will eventually join together as they explore the continent and attempt to overcome the challenging dangers waiting for them. Octopath Traveler’s story can be divided into eight sections, one for each character. Each section spans four chapters. After you pick your starting character and finish her/his first chapter you can move to another character’s first chapter, or carry on with your starter’s second chapter. It sounds like you have freedom to explore Orsterra as you like. In a way, it seemed like Octopath Traveler would be a spiritual successor to my favorite game of all time: SaGa Frontier. It’s not, nor is it even close.

Alfyn is awesome. If you don’t know who to start with, go with him.

The problem is that the game will flat out tell you what level you should be if you want to survive new areas, caves, dungeons, forests, etc. I’ll use my personal experience as an example. I started the game with Alfyn because I think apothecaries are neat and he was built like a brick house. After I finished his starting chapter, the game showed a danger level of 20-something for his second chapter. Alfyn was level seven when I finished his first chapter. There was no way I could survive his second chapter, much less make my way towards its destination. In essence, I was forced to recruit the rest of the characters before even having some hope of survival.

But, the good news is that recruiting the remaining seven heroes is fun in its own right. Exploring Orsterra is a treat because there are chatty locals, tons of hidden treasures, plenty of shops and unique things to discover. By the time you get your last character, you should be set to move onto the second chapters. A handy quick jump feature lets you revisit towns in a flash. As for the actual stories, they’re SOP. The eight characters don’t have much to say to one another. Party banters will occur at certain times, which play similarly to the famous Skits in the Tales of series. Other than that, the eight narratives are disconnected from each other. Some are worth seeing, some aren’t. You can skip scenes in an instant with the push of a button. Full disclosure: I did that with some of the character’s because I found their quests dull, despite the game’s overall solid writing.

Said writing is favored by the game’s aesthetic. Octopath Traveler is a beautifully created game with retro-style sprites marrying modern day background and particle effects. The character sprites are expressive and crisp despite their tiny statures. Watching them take down enemies four times their size is quite thrilling, especially due to the monster designs’s gorgeousness. It’s a shame that there isn’t a beastiary available so you can see these amazing designs at your leisure. Unsurprisingly, the game features a wonderful soundtrack with multiple town, dungeon, battle and story tracks. The voice acting is of equal quality and has an English or Japanese option.

Octopath Traveler lets you have four characters in a party at a time, with three being switchable. Characters not in the active party don’t gain experience. In order to switch party members, you need to go to a town’s tavern and speak with a bartender. It’s an unnecessary step that taps the brakes on progression. Each character has an ability called a Path Action. These will let you learn more about NPCs, acquire items from them, have them follow you, or place you in a duel. There are eight characters, but when you get down it, there are only four path actions. Again, the game’s spirit wants you to build a party of your choice. But, the game’s design highly recommend you include one of each Path Action. The promised flexibility is nowhere present when you traverse Orsterra.

Well, no. That’s not entirely true. The flexibility with Path Actions isn’t there, but combat is an entirely different story. This is where Octoapth Traveler truly shines. While everyone can equip a variety of weapons and armor, each character’s job has its own set of unique skills that let you take down the monstrosities of Orsterra. Looking again at Alfyn, his apothecary skills let him poison enemies, heal allies, throw an ice spell, or unleash hell with his ax. Such variety is important because every enemy has specific weaknesses to various weapons and elements. Exploiting weaknesses lets you break their defenses and gain a free turn. To add to this, you can use Battle Points to enhance your abilities or attack multiples times in  a row. Understanding enemy weaknesses and unleashing your BP at the right time is crucial to battle. As you unlock more job classes and learn more abilities, the enemy’s follow suit by becoming more varied and difficult to break. The combat variety is always on point in Octopath Traveler. Eventually, you’ll be able to give your team sub-classes for even more options. Finally, each job class can learn passive abilities that put the cherry on top of this sundae. Out of everything that Octopath Traveler has to offer, it’s the combat that will keep you returning. 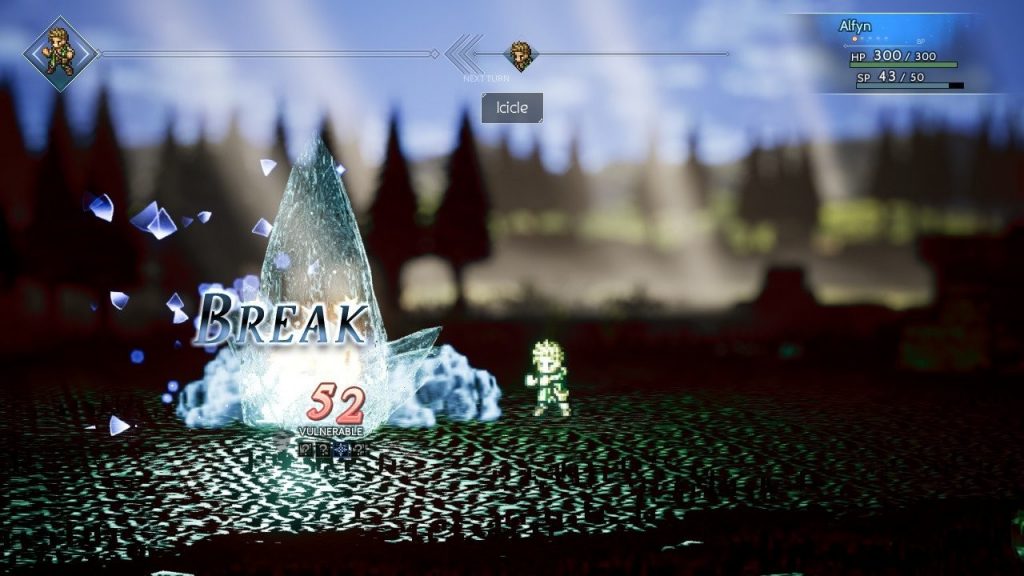 Here, we see Alfyn breaking faces with his awesomeness. Seriously, watching an enemy reach Break status is so satisfying.

With a variety of side-stories and extra content, Octopath Traveler can last you up to 80 hours. There isn’t a New Game Plus option, but there is some meaty post-game content you can tackle if you can’t get enough. Despite some design choices, I feel that it’s worth repeating: Octopath Traveler is a fun game. You just have to play it the way the developers want you to. Normally, this would be fine; at its core the game is a blast. But the frustration and confusion come in when the game looks like it promises you one thing and delivers something entirely different. Overcoming said frustration and confusion doesn’t take long. By the time I started the second chapter for Alfyn, I was having  great time. No matter who you start with, fans of RPGs will feel the same.

Overall, 8.5/10: Octopath Traveler misses the mark due to some questionable features, but they’re easy to dismiss. This is a well-crafted RPG that all fans of the genre will enjoy.