We’re back, folks! We are going to be looking at the second game featured in Muv-Luv for the PlayStation Vita: Muv-Luv Unlimited. While you can play either of the two games from the start, I highly recommend playing Unlimited after going through at least Muv-Luv Extra once. 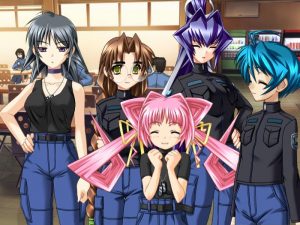 Muv-Luv Unlimited begins with protagonist Shirogane Takeru waking up in his bed by himself. Sumika isn’t there to throw off the sheets. Meiya isn’t lying beside him. Indeed, Takeru is all alone in his bedroom. After dressing and leaving the house, he finds his neighborhood completely abandoned and in ruins. The thing that really gets him is that the remains of giant robots are scattered about the rubble. Convinced that he’s in a dream, Takeru wanders to a military base. Unfortunately, this isn’t a dream. He gets arrested by the military officers and interrogated by Kouzuki Yuuko. Takeru confides in her that he woke up in this strange world. Yuuko informs Takeru that aliens called BETA have wiped out most of the Earth. Now, only a few humans remain as they attempt to fight the BETA with giant robots.

Yeah, things got dark for Takeru. The strangest thing is that Takeru meets the same people from his original world, except this time they’re all military soldiers fighting for Earth’s survival. Tamase Miki looks like her Extra counterpart, but she no longer wears a cat bell and is an expert sniper. Yoroi Mikoto looks like his Extra counterpart, but now is a survivalist expert. And, he has turned into a she in this new world. While each character from Extra retains most of their quirks and personality traits, Takeru has a hard time adjusting to this new world. You’ll take control of Takeru as he goes through military school and attempts to win the heart of one of five female classmates.

As expected, the story in Muv-Luv Unlimited is the best feature. It’s slightly longer, bleaker, and more technical than it was in Extra due to the setting. There are still lighthearted moments and romantic interactions, but there are times when things don’t look good for Takeru, his classmates, or the planet. Watching Takeru grow into a fine soldier is enjoyable to behold. Just like Extra, you will end up earning the love of one of the female cadets. This will effect the ending and certain plot events, but the overall arc will remain unchanged.

Muv-Luv Unlimited has robots and aliens, but gameplay is standard visual novel stuff. You’ll be spending the entire time watching the story unfold from Takeru’s perspective by advancing text and making choices. Despite this hands off approach, Muv-Luv Unlimited has a way of engaging players with its beautiful presentation. Characters “move” with nearly every sentence in a unique way not found in current visual novels. The art style is the same with big-eyed, big-haired characters. This new setting in Unlimited adds a plethora of new outfits and environments. Animated cut scenes trickle in here and there for extra flavor. The music is just as magnificent as before. Songs from Extra have returned, and new songs have been composed just for Unlimited. The game is entirely voiced with excellent Japanese voice acting.

Obviously, Muv-Luv Unlimited is 180 degrees from Muv-Luv Extra. One more difference between the two is that it takes a bit longer to finish. This is especially true if you want to see everyone’s route and unlock all of the extras in the gallery. Personally, once through was good enough for me. Unlimited has a lot more reading when compared to Extra. Still, it’s an enjoyable ride. Since the Vita version of Muv-Luv contains both games, there’s no reason why you shouldn’t check out Unlimited. To avoid some spoilers, be sure to finish Extra first.

Overall, 7.5/10: Muv-Luv Unlimited’s story is a far cry from the upbeat tone of Extra, but it still delivers a great narrative with romance, heartbreak, and plenty of science fiction lore.