The game starts with a king riding his pet dragon, a meteorite plummeting to the planet, and a wanderer enjoying his travels on his Chocobo. While all of the above is going on, the winds stop blowing. This ominous force of nature indicates that something is wrong with the Wind Crystal. Brought together by circumstance, or maybe something greater, the above mentioned wanderer is joined by a princess, an old amnesiac, and a pirate. Together, they head to the Wind Shrine. Final Fantasy V is unique because things are already beginning to look grim for Bartz, Lenna, Galuf and Faris. The wind dying is the start. With the help of the crystal shards, these four heroes will try to protect the remaining crystals. It’s classic. It’s fun. It’s tragic. And, it’s full of emotion. The four heroes I mentioned will form a strong bond over the course of the journey. All of them are likable in their own way; they’re more than just talking heads. Those that have already played Final Fantasy V know that the villain in this game is downright despicable. That’s true in the Game Boy Advance version, too. 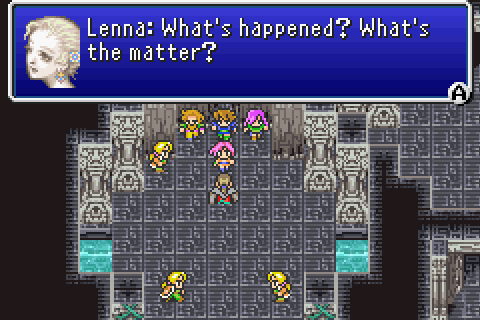 Lenna can’t even begin to fathom what’s in store for her.

A new script is one good reason to check out FFV Advance. But, let’s be real. The main attraction is the game play. It’s more than just going from town to dungeon via foot, Chocobo or dragon. It’s more than shopping for new gear, spells and items while chatting with interesting NPCs. It’s more than fighting a large array of monsters with the courtesy of the Active Time Battle system. All of the above is great, but what really sets FFV apart from the rest of the games in the series is its expansive Job System. Bartz and his friends will have access to a huge selection of jobs that designate their performance in battle and their base statistics. The game eases you into it with the classics you’ve come to know: Knight, Thief, Monk, Black Mage, and White Mage. But, one more job in the starting set is included: the Blue Mage. Final Fantasy V is the first game in the series to allow you to learn and use enemy skills. From there, things only get better. It won’t take long for Bartz and his friends to unlock the remaining jobs. Each job can learn a variety of active or passive abilities. This allows for an exciting amount of variety and customization. If you want to make a Samurai that can cast Black Magic, then go ahead. That’s just one of many examples. The options are there and begging to be used. Four new jobs have been added to this version of Final Fantasy V: Necromancer, Cannoneer, Gladiator and Oracle. Sounds neat, right? Sadly, these new jobs are what knock the game’s score down a peg. One of the things I’ve always praised the job system for was that each job had a use. The problem with these four new jobs is that they get unlocked far too late in the game; you’ll be hard-pressed to find their “use” right before the credits roll. One could set aside some extra hours to unlock some or all of their abilities, but most will want to proceed to the game’s conclusion.

Playing Final Fantasy V on the Game Boy Advance just feels right. The game uses the same graphical style from the game’s Super Famicom debut, but the edges, textures, and colors are sharper. It’s always enjoyable to see how your team looks with a new job due to the new clothes that comes with it. Yoshitaka Amano’s character art is more heavily featured here thanks to character portraits being included in dialogue. Final Fantasy V’s look has always been compared to Final Fantasy IV’s. They’re similar, but Final Fantasy V’s Job System adds much more variety. Nobuo Uematsu, the maestro of the series, returns again with a wonderful soundtrack. The tracks in this one have a much more ominous and haunting tone. There are still upbeat moments, but the soundtrack helps reflect the overall unpleasantness of the situation facing the four heroes. 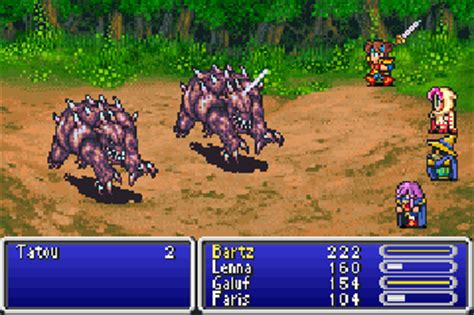 Wardrobe change! Getting a job has never looked so good.

Final Fantasy V Advance usually lasts a good 30 to 40 hours. For those that want to master all of the jobs and enjoy the exclusive Sealed Temple, then you’ll be looking at close to 60 hours. The big question on your mind is probably whether or not to purchase this Game Boy Advance rendition of Final Fantasy V if you’ve already completed a previous one. My answer is a resounding yes. Even if its new content leaves much to be desired, the core game is still as fun as ever. Also, note that the last time I played Final Fantasy V was when I played the Final Fantasy Anthology. Playing Final Fantasy V again without any loading times was a godsend. And, thanks to a handy Quick Save feature, you can play and stop effortlessly. I’m glad that I decided to revisit this classic adventure. Yeah, it was fun, but it also remind me of what the series used to be when I started playing it. Sure, most of the games are still enjoyable, but before all of the shiny graphics and blockbuster budgets, Final Fantasy represented classic role-playing. With Final Fantasy V Advance, you have more of that representation.

Overall, 9/10 – Get a job! Squaresoft has a solid port of a solid game with Final Fantasy V Advance.