One of the arcs in Final Fantasy IV is one you’ve seen before: four crystals that harness elemental power are in danger of falling into the wrong hands. It’s classic and effective. But, the more prominent arc is about the Dark Knight Cecil Harvey, the leader of the Kingdom of Baron’s elite military force called the Red Wings. The Red Wings use the latest in airship technology to keep Baron and its surrounding countries safe. At least, they used to. Now, Baron is attempting to rule the world with an iron fist. Cecil was ordered to seize the Water Crystal from the village of Mysidia. Disillusioned with Baron’s ruthless ways, Cecil gets demoted and sent on a new mission. With his best friend Kain Highwind, Cecil is about to begin a quest for redemption. There’s more to Final Fantasy IV than four elemental crystals. It’s a story about Cecil shedding his Dark Knight tendencies. It’s about the relationship between him and the beautiful Rosa. It’s about the rivalry between him and Kain. It’s about Cecil’s past. While the four crystals get the story’s engine running, there’s more that keeps it moving. I know what’s going to happen before it happens; remember that I’ve gone through this game many a time. The updated script from adds some extra flavor to the story and makes it worth a look no matter your familiarity. 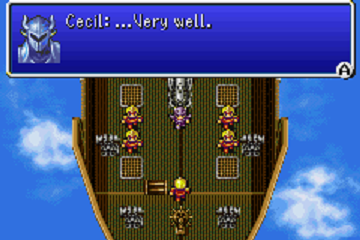 Cecil doesn’t say much at first. That changes as the story continues.

Final Fantasy IV Advance is a game that’s beautiful in in its simplicity. If you played Final Fantasy II on the Super Nintendo, then you know what to expect. You move your characters through a world map, towns, dungeons, castles, forests and even the underworld. Towns and dungeons are filled with hidden passages and treasures to discover. All of the towns have item shops, weapon shops, armor shops and inns. It’s simple stuff, but it worked in the early 1990s and it works again for the Game Boy Advance. There’s a palpable sense of excitement that only this series can realize when you enter an area for the first time.

In non-town areas, combat will occur. The random encounter rate has been turned up in this version. This can be either an annoyance or a blessing. It’ll depend on how effective you are in combat and whether or not you like the combat in the first place. Final Fantasy IV has always been a difficult game. At first, things are relatively simple. Cecil and his current team can get by with standard attack – maybe a spell or two if you want to finish the battle quicker. The further you get the, the more dangerous regular enemies become. You’ll need to cast magic, make sure someone is always on healing duty, and plan accordingly. Mashing the attack button isn’t going to earn you a victory.

That’s all fine. But, there is one technical issue: consistency. When anyone lands an attack, the calculated damage seems to be random. For example, Cecil will attack an enemy for about 1,000 HP. Cool. He’ll attack the same enemy for 500 HP. The foe is the same. Its position is the same. Cecil’s equipment and stats are the same. So, what happened? I’m not a programming expert, but I’m willing to bet that something didn’t get properly coded somewhere during the process. It won’t break the game or hinder progress, but it is something to be aware of.

Those that remember Final Fantasy II on the Super Nintendo will immediately recognize the same presentation for this version. Other than a fresh and new font for text and some character art inclusions, Final Fantasy IV looks and sounds the same as it did all those years ago. Personally, I love this. I’ve always been a man to give points to 2D sprites and classic music, so Final Fantasy IV Advance feels right at home. It’s a classic presentation that will never go out of style.

I’ve gone through Final Fantasy IV more times than any other in the series, so I was able to finish this version with most of the hidden extras in 20 hours. Newcomers will be able to get more mileage. No matter your familiarity, however, the time is mostly enjoyable from start to finish. Exclusive to this version is a bonus dungeon called the Lunar Ruins. This dungeon adds some difficult challenges to an already difficult game. But, it’s worth it to see it all. Actually, it’s worth it to check out Final Fantasy IV Advance even if you’ve already been through Cecil’s campaign. This is a great title through and a through. Despite this being my nth time seeing everything, that same “everything” is a classic no matter what console it’s on.

Overall, 9/10 – Even with some technical hiccups, Final Fantasy IV Advance is an excellent port of one of Squaresoft’s best.